Of Mud Pots and the End of the San Andreas Fault 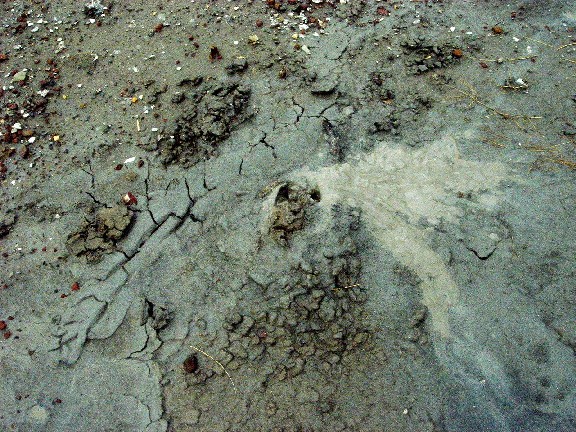 Mud pots like this may define the southern end of the San Andreas Fault (Photo: Horst Rademacher)

For 800 miles - give or take a few - the San Andreas Fault runs through almost the whole length of our Golden State. On the one end, it stops at Cape Mendocino, where the Gorda Plate prohibits its extension to the north (see Seismo Blog from October 27, 2008). The other end is also exactly known: All geologic evidence for the fault trace at the surface vanishes about 2.5 miles northwest of Bombay Beach, an isolated hamlet with a population of less than 400 on the east shore of the Salton Sea in Imperial County. To the northwest of this point, the fault is not only visible on the surface, but also defined by thousands of microearthquakes at depth. Southeast of the vanishing point, however, the seismicity along the strike of the San Andreas Fault stops abruptly, only to jump several miles west to the Imperial Fault, which connects California tectonically south to the Sea of Cortez.

That at least was the generally accepted view until a few months ago, when two earth scientists from the US Geological Survey office in Pasadena published their study on a very murky subject. For several years, David Lynch and Kenneth Hudnut had endured the sizzling heat and the choking sand storms in the desolate Imperial Wildlife Area along the southeastern shore of the Salton Sea, way south of Bombay Beach. This place is probably most famous among bird watchers, who flock here when migratory waterfowl use the region as a resting place on their Pacific flyway. But the area also contains hundreds of circular holes in the ground, none of which is man made. Instead, gases from the Earth's interior, mostly carbon dioxide and water vapor, hiss from the center of the holes or bubble through pits filled with muddy ground water. Mud pots or mud volcanoes, as these features are known in geologic terms, are in fact so abundant in this out of the way place that the CO2 eminating from them was once captured industrially for the production of dry ice.

The two researchers took a detailed inventory of all mud pots in the wildlife area, recorded their gases, and observed the way they bubbled and ejected their gas-filled liquid mud. They also measured the exact location of each mud pot with a GPS receiver. When Lynch and Hudnut finally plotted all their mud pots on a map, they noticed something peculiar: Most of them lined up as straight as a ruler. Their alignment was also exactly an extension of the San Andreas Fault, whose currently known end lies almost 20 miles to the northwest of the wildlife area. It may very well be, concluded the researchers, that the most famous earthquake fault in the world ends unspectacularly in a field of bubbly mud, too weak to generate any significant temblors in that area. (hra015)