Below zero: The 'bottom' of the Richter scale

Many of us still dread our high school days, when the math teacher talked about logarithms. Who understood then and who can remember now the alien concept of grouping numbers not in their natural sequence, but by some funny exponent applied to an arbitrary base. Well, here is a quick refresher on the simplest logarithms, those of base 10. Look at the number 100 and ask how often you have to multiply the number 10, our base, by itself to get 100. The answer is 2 - and that is the logarithm of 100. If you look at the number 1000 and ask again how often you have to multiply our base number 10 by itself to get 1000, the answer is 3. Hence the logarithm of 1000 is 3. You therefore can use logarithms to easily deal with really big numbers, as the logarithm of one million is six and the latest bail-out figure for Wall Street, 100 billion, is reduced to a mere 11 when you determine its logarithm.

Richter scaled his earthquakes using such a logarithmic method (see blog November 18, 2008). A magnitude 3 earthquake therefore has ten times larger amplitudes than a 2; a magnitude 4 is ten times bigger than a 3 and hence one hundred times bigger than a 2. In Richter's day, the seismograph's recordings were on light sensitive paper, which was illuminated by a light beam artfully reflected from the moving mass of a Wood-Anderson seismograph, its mirror. Once the film was developed, the ground movement was represented by a dark line on that paper. 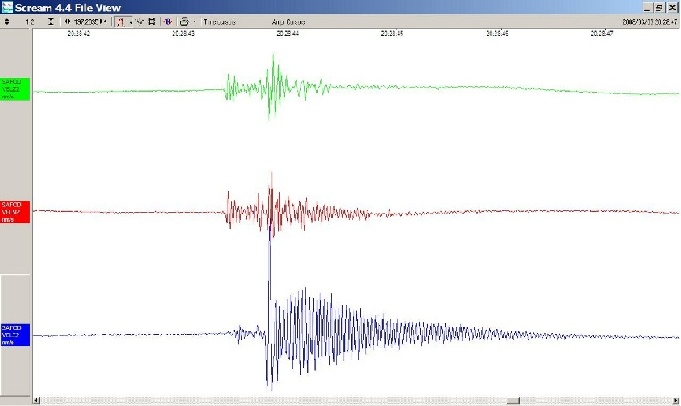 Recording of a magnitude minus 1 earthquake, measured inside a borehole in Parkfield, CA. (Click to view larger image.)

But even with a magnifying glass you were not able to see fine details of the ground movement. As a consequence, with the original Richter scale it was impossible to classify either the really big quakes (see blog December 1, 2008) or the tiniest microtemblors.

With today's electronic seismometers, however, the lower limit of the first Richter scale has been all but eliminated. These instruments are so sensitive that they can register earthquakes a hundred or even a thousand times smaller than an event of magnitude 2. But how do we label such tiny quakes? That is again where the ingenuity of a logarithmic scale comes in. An earthquake ten times smaller than a 2 would have a magnitude of 1; a hundred times smaller would be zero on the logarithmic scale. And if an event is thousand times smaller, its size would be "minus 1" on the Richter scale. And we do indeed measure such nanosized earthquakes regularly, for instance in a borehole, which penetrates the San Andreas Fault deep below Parkfield in Monterey County (see picture). (hra021)