Thousands of people drive by every day; millions have passed through without even noticing. There are only very few places in California where the San Andreas Fault, our most famous earthquake line, can be spotted at the Earth's surface. In two of these locations, the fault crosses a major freeway. Both places are in Southern California. The most famous of the two lies just south of Palmdale in the northeastern part of Los Angeles County. Immediately north of its S-Avenue exit, Highway 14 passes through a roadcut in a small ridge. The eastern wall of the road cut is almost 90 feet high and beautifully exposes folded layers of a few million years worth of old rocks containing crystals of gypsum (see picture 1). The rocks are bent and squeezed, because they are wedged between the San Andreas Fault at the southern end of the road cut and a minor fault at the northern end. 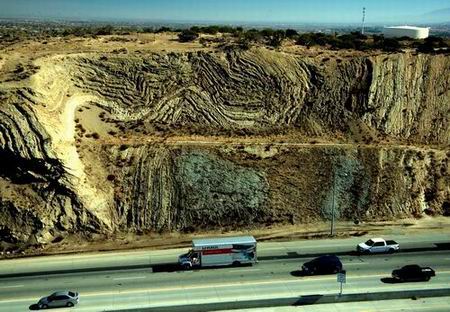 Even more drivers pass through the second crossing every day. It lies at the high point where Interstate 5 winds through the Transverse Ranges. A road cut on the west side of the freeway just at the top of Tejon Pass exposes the fault in unsurpassed clarity. There a greyish layer gives way to brownish soil. The two layers are separated by a straight line - the San Andreas Fault itself (see picture 2). 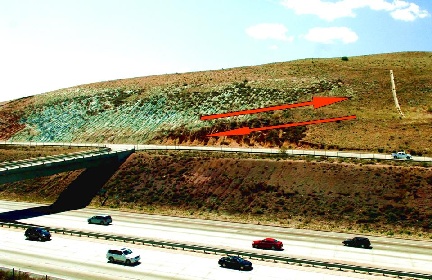 There is some exposure of the fault along Northern California freeways as well, albeit not nearly as clearly as in the south. On the Peninsula west of San Mateo and Burlingame, Interstate 280 runs through a linear valley several miles long. This is actually the expression of the fault. Two elongated lakes, Crystal Springs Reservoir and San Andreas Lake lie in this valley - the latter lends its name to the fault, which runs for 800 miles through our state.

This blog wouldn't be complete without a safety warning: When you pass any of the fault crossings, don't be tempted to stop on the freeway. It is not only illegal, but also very dangerous due to heavy traffic. All locations are near exits and can be accessed by frontage roads. The best spot to view the fault along Interstate 280 is the vista point accessed from the northbound lane. The vista point is dominated by a statue of Father Junipero Serra. (hra022)