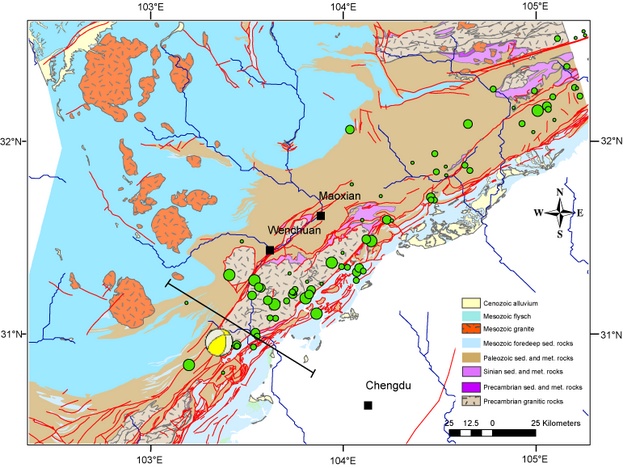 Figure 1: The earthquake (yellow ball) occurred along the Longmenshan Fault (red lines), the boundary between the Sichuan Basin (white are in the lower right) and the Tibetan Plateau (blue are in the upper left). Image courtesy of MIT Department of Earth, Atmospheric, and Planetary Sciences. (Click to view larger image.)

When the Earth began shaking under the fertile soils of the Red Basin in China's Sichuan province a year ago today, nobody knew how bad it was going to get. It turned out that with its magnitude of 7.9, this quake was not only the world's strongest temblor last year. It was also the worst earthquake disaster to hit China in more than 30 years. Up to 80,000 people - an official number was never released - died in the rubble of the quake. Many victims were school children, as more than 14,000 classrooms were damaged, half of them collapsed entirely. Almost 400,000 people had to be treated for their injuries, which they sustained under tumbling buildings or in the numerous landslides in the mountainous epicentral region.

The earthquake occurred at the Longmen Shan Fault Zone, which marks the tectonic boundary between the eastern Tibetan Plateau and the Sichuan Basin. Its epicenter (yellow ball in Figure 1) was located less than 60 miles from Chengdu, the capital of Sichuan Province with its 11 million inhabitants. Here is what happened during the quake: Tibet, being pushed constantly by the northward movement of the Indian subcontinent, squeezed out a part of itself towards the east, resulting in this major "thrust earthquake" (Figure 2).

Figure 2: A piece of lower crust (red blob) squeezed between the Tibetan Plateau and the lowlands of Sichuan. Image courtesy of MIT Department of Earth, Atmospheric, and Planetary Sciences.

But several Chinese scientists speculated that other factors may have contributed to the severity of the quake. In the Chinese journal "Geology and Seismology," Fan Xiao, the chief engineer of Sichuan's provincial geology office, and others even went so far to say that the water in a recently built reservoir might have triggered this devastating earthquake. In 2001 work was started at the Zipingpu Reservoir. Its 470 ft high concrete dam sits just upstream from Dujiangyan. This city is home to a Unesco World Heritage site. The Dujiangyan Irrigation System was built in 256 BC and is still in use today. But the dam was also located just four miles from epicenter and was damaged severely during the quake.

The scientists speculate that the extra pressure of the water in the reservoir may have caused the Longmenshan Fault to slip, thereby releasing the tectonic energy stored in it. That does not mean that the earthquake would not have happened anyway. But the additional hydrostatic pressure from the 320 million tons of water stored behind the dam may have triggered the quake several years before it would have been due without the dam. We will explore how such "induced seismicity" works in one of the future blogs. (hra038)