Quakes on the Moon

When the first human set foot on the moon 40 years ago today, it was not only a "small step for a man and one giant leap for mankind"; it was also a red-letter day for seismology. During their 21-hour long stay in Mare Tranquillitatis, Neil Amstrong and Buzz Aldrin set up a seismometer (see Figure 1). And minutes after the sensor had settled down, it recorded the first moonquake and transmitted its data back to Earth. Never before had seismologists seen the interior rumblings of another heavenly body. The seismometer, which the astronauts of Apollo 11 installed, returned data for just three weeks. More advanced instruments were deployed later by the crews of Apollo 12, 14, 15, and 16 near their respective landing sites. These sensors transmitted their recordings down to Earth for years, until the broadcasts ceased in September 1977. 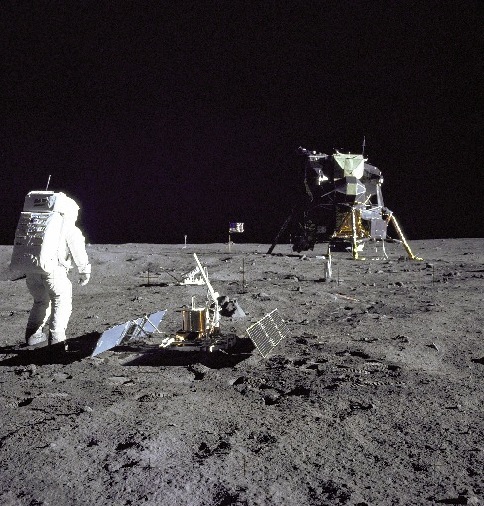 Buzz Aldrin next to the first seismometer on the moon, which he installed 40 years ago today. In the background is Eagle, Apollo's lunar lander. Photo: NASA (Click to view larger image.)

The lunar seismometers registered more than 12,000 seismic events. Over the years, researchers discovered that these moonquakes fall into four distinct categories. Most exciting was that about half of the moonquakes originate much deeper than any quake on Earth. The foci of these deep moonquakes are located in the lower mantle of the moon at a depth of between 435 and 750 miles. It turned out that these quakes do not occur at random time intervals. Instead, they repeat in a 27-day pattern. As this is the time it takes the moon to circle the Earth once, researchers concluded that these quakes are caused by the tidal forces that the Earth exerts on the moon. All of these deep moonquakes had magnitudes smaller than 3 (see left panel of Figure 2).

The average magnitude of the second largest group of lunar temblors was even smaller. These moonquakes have a very shallow origin of only a few miles at most and are generated by the thermal stresses along fracture planes in the uppermost lunar crust. Their cause is the enormous temperature difference of more than 400 degrees F between day and night on the lunar surface

Three types of moonquakes are shown here (explanation: see text). The top three rows are the recordings of a three-component long-period seismometer; the bottom row are the registriations of a short period instrument.Graphics by Yosio Nakamura, UT Austin.

At least 1700 other moonquakes were the rumblings of the lunar crust as a result of meteorite impacts on the moon's surface (see right panel of Figure 2). Because the moon does not have an atmosphere of any significance, most meteorites do not burn up due to the frictional heat as they do on their way through the Earth's atmosphere, but instead make it all the way to the lunar surface with a bang.

Most worrisome, however, is the smallest group yet discovered in the lunar dataset. Researchers found 28 sizeable shallow moonquakes with magnitudes of up to 5 (see central panel of Figure 2). They occur at depths of less than 100 miles and would certainly be felt by astronauts working on the moon. Because of these quakes, any future lunar base envisioned by NASA would have to be built with seismic safety codes in mind. (hra041)