While people all over the world - and many Californians - are watching in horror the unfolding of the most recent earthquake disasters in Samoa and on the Indonesian island of Sumatra, a very unusual sequence of temblors is happening right at our doorstep. The Owens Valley east of the crest of the Sierra Nevada was shaken last week by three moderate sized earthquakes within 48 hours, and many smaller ones. The strongest shock had a magnitude of 5.2 and occurred Friday (October 2) in the afternoon. The other two had magnitudes of 5.0 and 4.9. Their epicenters were located on the eastern shore of Owens Lake, halfway between the small towns of Keeler and Olancha. All three earthquakes were felt as strong shocks in the nearby towns of Lone Pine, Big Pine and Bishop. Some shaking was reported as far away as Las Vegas, San Diego and even in some locations here in the Bay Area. 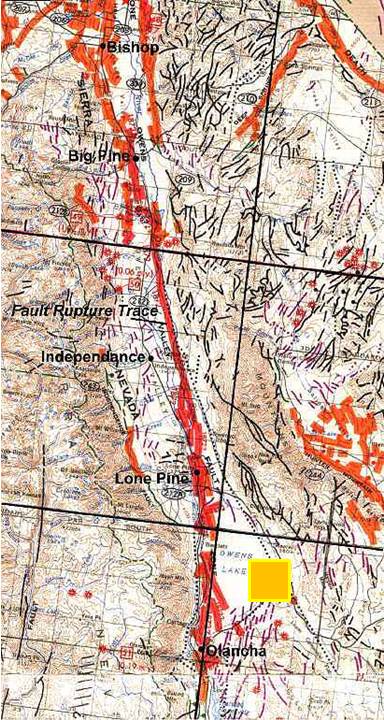 From the CGS map of California Faults and Ruptures. Yellow square shows the location of the recent earthquakes.

Earthquakes are by no means rare in Owens Valley, the long depression east of the granite range of the Sierra Nevada mountains, which, geologically speaking, is the spine of California. In fact, the strongest temblor there competes with the Great San Francisco Earthquake of 1906 for the title of "strongest earthquake" in our state in historic times. It happened on March 26, 1872 and was felt by - among others - John Muir, the 19th century nature lover par excellence. Here is how he described what he felt in his cabin somewhere in what is now Yosemite National Park:

At half-past two o'clock of a moonlit morning in March, I was awakened by a tremendous earthquake, and though I had never before enjoyed a storm of this sort, the strange thrilling motion could not be mistaken, and I ran out of my cabin, both glad and frightened, shouting, "A noble earthquake! A noble earthquake!" feeling sure I was going to learn something.

What Muir calls a noble earthquake was rather deadly for others. In Lone Pine alone, 52 of the 59 houses that existed in this hamlet almost 140 years ago were destroyed, and 27 people died in the rubble. In 1872, no seismometers existed in California - the first one was set-up by the Berkeley Seismo Lab's predecessor in 1887 - so nobody could determine a magnitude or any other scientific measure of the strength of the Owens Valley quake. But given the destruction near the epicenter and the fact that the earthquake caused the Earth's surface to rupture over a stretch of at least 100 miles, seismologist estimate its magnitude at 8.0 or more. The Owens Valley quake is therefore comparable in strength and energy release to the 1906 Earthquake in San Francisco.

The remnants of this rupture can still be seen today as a fault scarp just north of of Lone Pine, a few hundred yards east of Highway 395. The offset, or slip, is still clearly visible even after almost 140 years, having moved four feet vertically and about 18 feet horizontally. The rupture surface of last week's quakes seem to have been on the same fault line as the quake from 1872. The earthquake triplet was also dominated by horizontal strike slip. Looking back from the fault scarp towards the west, one gets a majestic view of Mount Whitney, the highest point not only in the Sierra Nevada, but also in the contiguous 48 states (hra044).