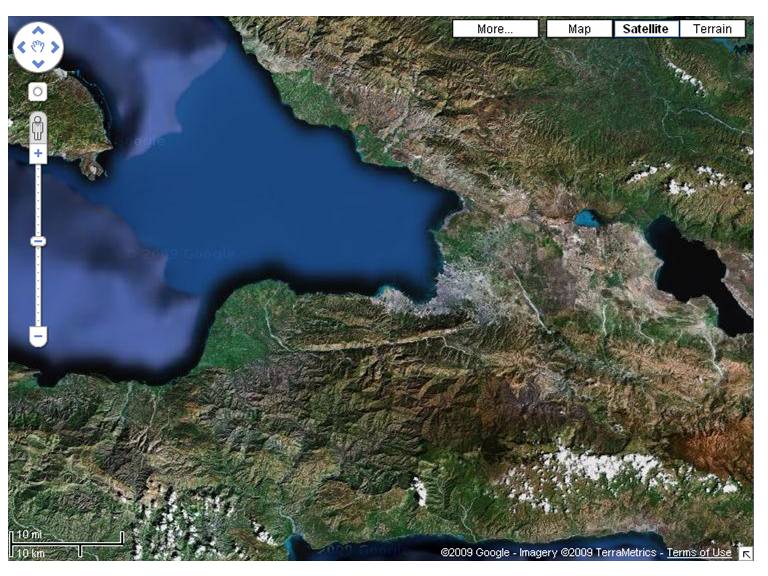 One of the reasons, that the massive relief effort after Tuesday's devastating earthquake in Haiti is only very slowly getting into high gear, is the fact, that many roads are impassable and numerous bridges are destroyed. First responders and rescue teams use satellite images to assess the destruction and accessibility of various neighborhoods in Port-au-Prince and in the outlying towns and villages. In addition, the view from space also helps Earth scientists to gain insight into the tectonic movements, which caused the earth crust to break so violently on Hispaniola.

As described in Wednesday's blog, the focus of Tuesday's magntiude 7 temblor lay at a depth of 8 miles on the Enriquillo-Plaintain Garden fault, which cuts through the southern section of Hispaniola. It runs along an almost straight East-West trending line through the mountains southwest of Port-au-Prince. The fault scarp is clearly visible in the satellite picture (Figure 1), which was taken last year from an imaging satellite. If you zoom in on it, you can see that the scarp is actually a linear valley with a stream running through it. 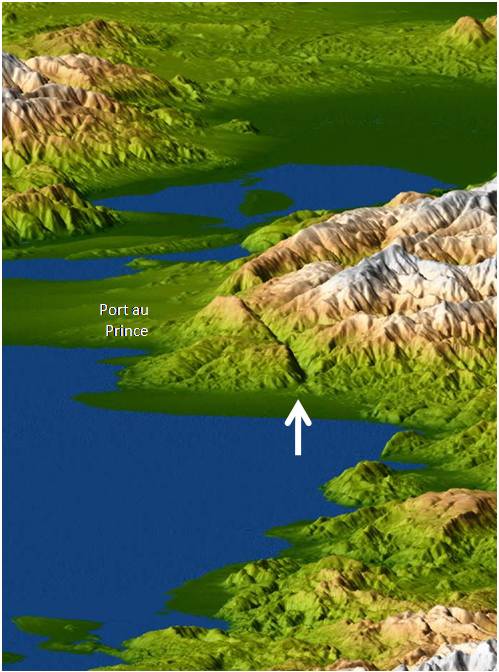 Figure 2: Three-dimensional elevation model of the region around Port au Prince. The mountains are not snow-capped, rather the color is an indication of the elevation (green low, white high). (Image from Jet Propulsion Laboratory)

This scarp is also clearly visible on the maps which Nasa created from the data gathered by the Space Shuttle Radar Topography mission. During several flights of the Space Shuttle an automatic radar camera took pictures of the Earth's surface underneath the Shuttle's orbit. For each spot, two pictures were taken from slightly different angles. Various computer codes can be used to combine the two images. Figure 2 shows a three dimensional map of the region around Port-au-Prince under an oblique view from the northwest. The scarp in the mountains is the prominent feature in the center of the image (white arrow). Figure 3 shows a different combination of the two radar images from Haiti. They were merged into an anaglyph. If you happen to have a pair of those crazy 3-D glasses handy, (red for left eye, cyan for the right), you will also clearly see the fault. 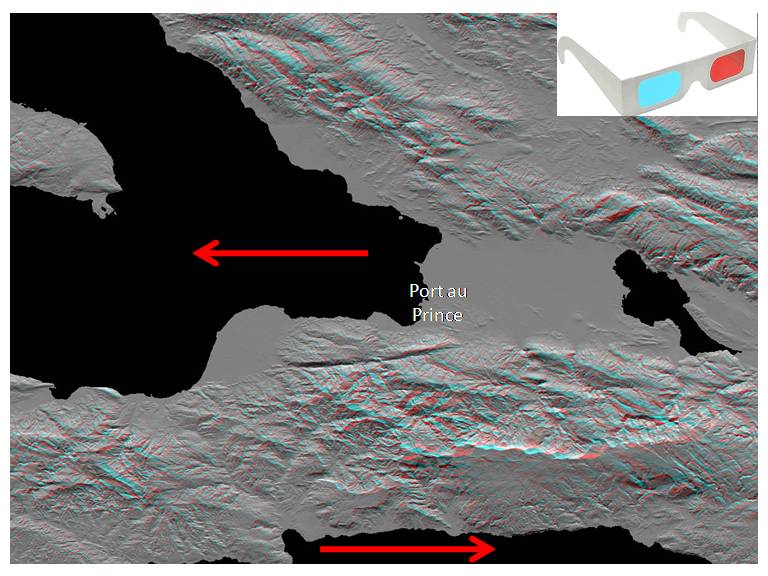 In the meantime, Gavin Hayes from the USGS's National Earthquake Information Center in Boulder, CO, has used dozens of seismic recordings to compute the actual movement along the Enriquillo-Plaintain Garden fault. According to his calculations, the fault ruptured exactly underneath the visible scarp over a length of approximately 25 miles. It broke in a left-lateral movement, as indicated by the arrows in figure 3. Within roughly 15 seconds, the northern block had shifted by almost 9 feet to the left, while the southern block had moved a similar distance to the right, resulting in a total fault slip of about 18 feet. Such values are typical for a magnitude 7 quake. During the Bay Area's 1989 Loma Prieta shaker the San Andreas Fault ruptured over a length of approximately 22 miles. (hra050)