The huge earthquake, which on Saturday devastated large areas of Chile, was the largest temblor anywhere on Earth in more than five years. With a magnitude of 8.8, it was about 30 percent smaller than the great Sumatra earthquake of December 28, 2004, but also almost one thousand times more energy than the last destructive temblor in our area, the Loma Prieta earthquake of October 1989. 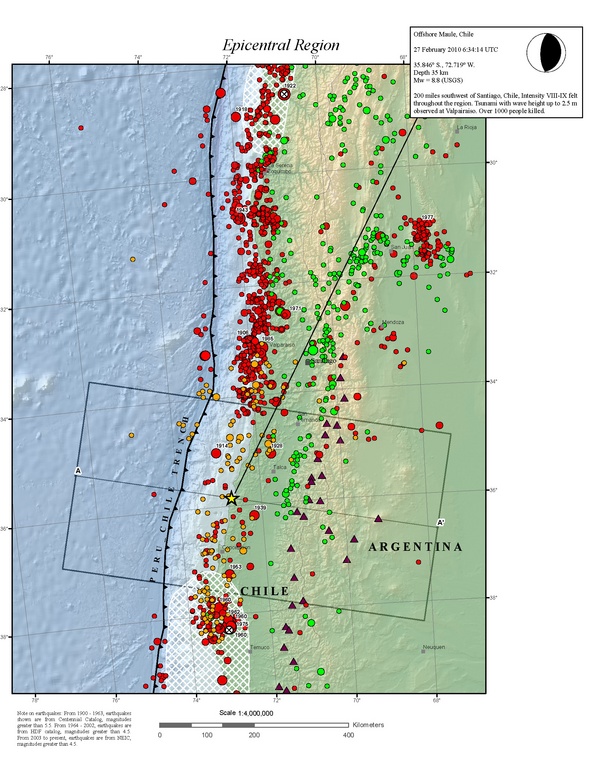 This map shows all earthquakes in southern Chile over the last 100 years with magnitudes larger than 5.5. Until Saturday, the area around Concepcion had much fewer quakes than the rest of coastal Chile. The yellow star depicts the epicenter of the most recent 8.8 temblor. (Map courtesy of USGS)

Like the Haiti earthquake of January 12, 2010, this great Chilean earthquake was not unexpected. Here is why: The entire Pacific coast of South America is prone to very large earthquakes, because it defines the collision zone of the westward moving South American plate and the eastbound Nazca Plate. These plates move toward each other at a rate of almost 3.2 inches per year. The South American plate is continental and carries all of Latin America south of the Isthmus of Panama. The Nazca-Plate underlies most of the southeastern Pacific Ocean and, like all oceanic plates, it is much denser than a continental plate. Due to this density difference, the Nazca-Plate is pushed under by the South American Plate by the collision and dives into the Earth's mantle. In the region of the epicenter of Saturday's quake, the angle under which the Nazca Plate subducts beneath South America is about 27 degrees.

As the oceanic plates dives, it tries to take the leading edge of South America with it, thereby bending it downwards. As continental crustal rocks are neither plastic nor elastic, but rather brittle, the bending causes an enormous strain in the rocks of the westernmost South American plate. Finally the bending continues so far that the strain exceeds the strength of the rock. It then breaks and the bending edge of the plate snaps back. This happens extremely quickly and results in huge earthquake - as we saw on Saturday.

However, not all areas affected by the subduction of the Nazca-Plate snap back at the same time. During the last century, regions along most of Chile's 2000 mile long coastline experienced such a snap back in the form of a huge earthquake. Seismologists counted at least four quakes with magnitudes larger than 8 and countless temblors between 7.0 and 7.9. In fact, the largest temblor ever measured occurred just 200 miles south of Saturday's epicenter, when on May 22, 1960, the Earth shook in a magnitude 9.5 earthquake.

The only region along Chile's coast which has been an exception, and had not experienced a major quake in the last hundred years, was the coastal area of Concepcion. And this is exactly, where Saturday's "terremoto" hit with its devastating effects. (hra052)