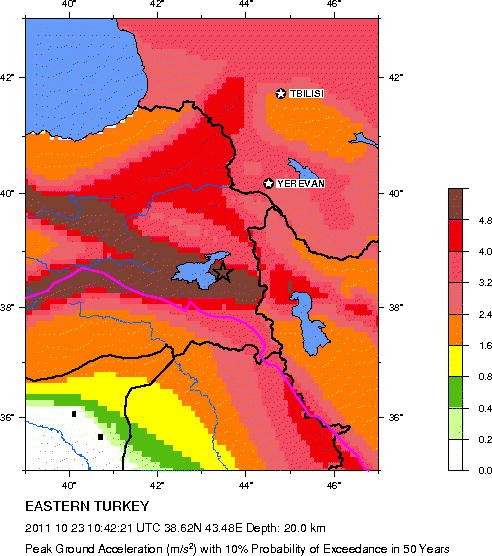 Looking at the world's seismic hazard map, the area around Lake Van in the border region between Turkey, Iran and Iraq is marked in a suspiciously dark brown color: It indicates that this area in far eastern Anatolia has one of the highest earthquake hazards in the world. Sunday's quake and the destruction it caused in the city of Van and the neighboring villages was therefore no surprise to seismologists. In Ercis alone, the town of 75,000 inhabitants closest to the epicenter, more than 80 multi-story buildings collapsed, trapping dozens, if not hundreds of people in the rubble.

Turkey is one of the most seismically active countries in the world. The northward push of the Arabian Plate into the Euasian Plate with a speed of approximately one inch per year is the ultimate cause of the tectonic activity. However, this collision is not as clean and well defined as the plate boundary in our Californian backyard. While here, a rather narrow San Andreas Fault zone marks the boundary between the Pacific and the North American plates, the collision zone in Eastern Turkey and the neighboring areas looks more like a complex tectonic jumble. Over several hundred square miles of high mountain ranges and dozens of separate faults dominate the region.

Before Sunday's quake, the area had already seen many destructive temblors. A magnitude 7.3 earthquake shook the region on November 24, 1976. Its epicenter was less than 40 miles from the most recent quake. Many villages in Turkey and neighboring Iran were destroyed, and more than 5000 people died. On May 22, 1971 a moderate earthquake with a magnitude of 6.3 shook a region west of the current zone of destruction. Then more than 90 percent of all houses in the city of Bingol collapsed and several thousand people died.

Although the region around Van in East Anatolia has a large seismic risk, even greater hazards lurk in the Earth's crust further to the West. The North Anatolian Fault zone, a tectonic regime similar to our San Andreas Fault, underlies some of the largest cities in Turkey, including Istanbul, the gateway between Europe and Asia. The devastating Izmit earthquake of 1999 with a magnitude of 7.6 broke a section of this fault. More than 17,000 people were killed, 50,000 were injured and 500,000 were left homeless. The most destructive quake in Turkey in the last hundred years also occurred along the North Anatolian Fault. A magnitude 7.8 earthquake struck the city of Erzincan in 1939, killing an estimated 33,000 people. (hra065)