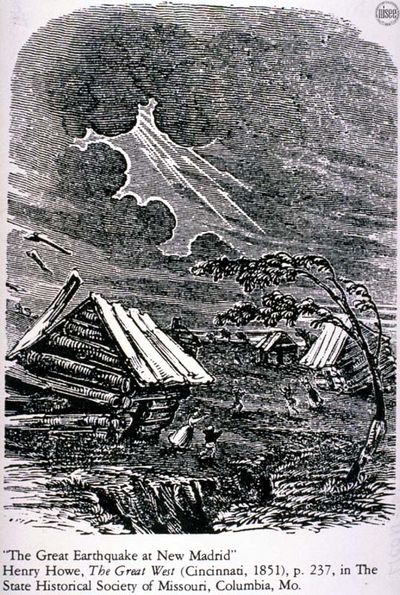 Figure 1: Image from the archives the State Historical Society of Missouri, courtesy of the National Information Service for Earthquake Engineering, EERC, University of California, Berkeley.

When you drive North on Kentucky State Highway 94 away from the Tennessee Border but close to the Mississippi, you may notice one of those ubiquitous solid bronze Historical Highway Markers (see figure 2). The inscription talks about the "greatest earthquake recorded in North America," which was centered in this area. What, major earthquakes in Kentucky? Aren't the really big ones supposed to happen only at the West Coast or in Alaska? Indeed the area where today's states Kentucky, Tennessee and Missouri meet was shaken by a major temblor exactly two hundred years ago today.

The earthquake struck at about 2:15 in the morning. One eyewitness, Eliza Bryan, described the unusual events: "The screams of the affrighted inhabitants running to and fro, not knowing where to go, or what to do - the cries of the fowls and beasts of every species - the cracking of trees falling, and the roaring of the Mississippi - the current of which was retrograde for a few minutes, owing as is supposed, to an irruption in its bed -- formed a scene truly horrible." Two more strong earthquakes struck the area within the next two months, one on January 23 and one on February 7, 1812.

Two hundred years ago, the Mississippi River valley was the frontier to the American West. Only eight years before the earthquake struck, the US had bought from the French the Louisiana Purchase, a huge swath of land west of the mighty river. New Madrid, a town across the river from today's historical marker, had been settled in 1789, and its 3000 residents were proud to live in the oldest city west of the river. The earthquakes, however, did not only destroy most of the ramshackle houses and log cabins in this frontier town. As the marker indicates, the tremors were also felt almost everywhere the white man had settled in America, from Boston and Maine all the way to New Orleans. The shaking was so severe that chimneys toppled in Cincinnati, Ohio, and church bells started ringing on their own in South Carolina. 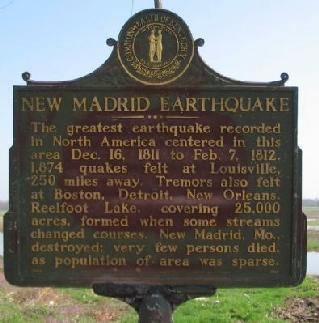 Taking into account the huge area affected by the seismic waves of these three shakers, seismologists first rated the quakes with magnitudes of 8 or greater, clearly topping the magnitude 7.8 quake that shook San Francisco in 1906. When the historical marker was erected in 1964, the superlative of "greatest earthquake" mirrored the state of knowledge at the time. Now, however, more thorough investigations have led to a significant downgrade of the "New Madrid Earthquake Series." At most, the quakes had magnitudes of 7, maybe even only 6.5.

As in the case of the most recent quakes in Oklahoma, the area of seismic shaking was deceiving to the early students of the New Madrid quakes (see blog 9 Nov 11). Read more about the causes of the mid-continent earthquakes in the next blog.
(hra069)