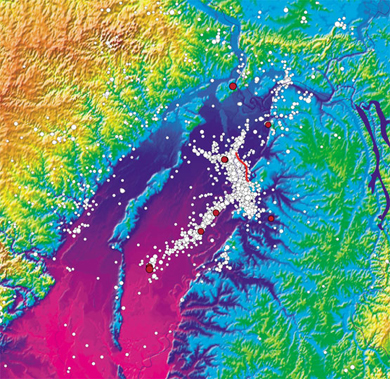 Figure 1: This relief map of the area around New Madrid shows the low-lying areas of the Mississippi Valley in blue and purple. The higher elevations are depicted in green, yellow and brown. The white dots are the epicenters of recent earthquakes. The Reelfoot Fault is shown as a small red line. (Source: Center for Earthquake Research Information, Memphis, Tenn.)

The earthquake sequence that struck the central Mississippi Valley two hundred years ago (see most recent blog entry) was remarkable. It occurred far from any tectonic plate boundary, the regions normally marked by high levels of seismic activity. Although temblors in these areas are much less frequent than in California or Alaska, such intra-plate earthquakes are not that unusual. The 5.8 quake that shook Virginia and the capital in August was a reminder that such quakes do happen. But what is it that causes the Earth to tremble thousands of miles from any plate boundary?

Put in simple terms, we can compare the stable interior of a continent with a pane of glass. Virtually every place in the contiguous United States east of the Rocky Mountains is part of this solid platform. Even though the Earth's crust in this area is quite solid when compared to California, it is not totally free of mechanical stress. On the one hand, the continental interior is battered by the actions at the plate boundary in the West. It is also still recovering from the huge load of the ice sheet of the last ice age. During that era, the northern part of the continent was completely blanketed with layers of ice several kilometers thick. It melted only 12,000 years ago, relieving the crust of its load. Another factor is the age of the crust far away from any active tectonic boundary. While the rocks along plate boundaries are usually young, continents can be several hundred million years old. Their age makes them extremely rigid, in contrast to the more ductile crust at the continental fringes.

And this is where the comparison with the pane of glass comes in: When battered at the edges, the mechanical stresses in the center of the pane can build up. Once under stress, a slight puncture at one point is enough to make the entire pane shatter. The area around New Madrid is such a puncture point. There the Reelfoot Fault, an ancient rupture line, crosses the Mississippi Valley (red line in Figure 1). Because of the accumulated stresses and the rigidity of the continental crust, slight movements along this fault can lead to larger ruptures, such as those of two hundred years ago. 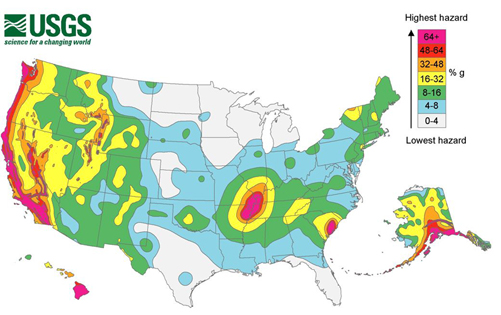 Figure 2: Earthquake hazard map of the United States. The large oval in the eastern half of the continent shows the hazard associated with the New Madrid Seismic Zone. Its center is purple, depicting a hazard similar to the one we have to live with here in California. (Source: USGS)

Paleoseismic investigations in this area have shown that the earthquake sequence of 1811-1812 was not unique. Similar strong shaking occurred at least three times during prehistoric times - probably around 1450 and 900 A.D. and 2350 B.C. Because other strong temblors cannot be ruled out in the future, scientists from the USGS have determined that the seismic hazard in the area around New Madrid is as high as that along the San Andreas Fault or the Pacific coast of Alaska (see Figure 2). (hra070)