A Reminder of a Lurking Hazard 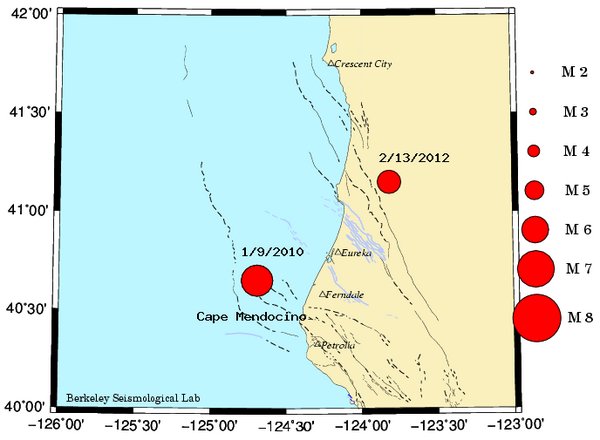 The magnitude 5.6 earthquake that rattled a remote part of Humboldt County shortly after 1 pm today was a stark reminder about the dangers lurking in the northern part of our state. Even though nobody seems to have been injured by the latest temblor and the damage appears to be confined to a few broken cups, glasses and windows, this is no reason to take the shaking lightly. As pointed out several times in earlier entries in this blog, the area between Cape Mendocino and the Oregon border is the most active region of the state when measured by the release of seismic energy. It is also the area where one can expect the strongest earthquakes on the west coast.

This statement, however, is in strong contrast to public perception. We in the Bay Area, as well as our Southern California neighbors in the LA region, tend to focus on the seismic hazards hidden in our own back yards. Given human nature, such a point of view is completely understandable. Many of us have seen the devastating effects the Loma Prieta earthquake had on our infrastructure in 1989. After all, the construction of the new Bay Bridge is a direct consequence of this magnitude 6.9 earthquake. In the southland, people will remember the destruction caused by similarly sized earthquakes in Northridge (1994) and San Fernando (1971). But with all due respect to anybody affected by these quakes, their strengths pale in comparison to what can be expected in the very north of California.

The earthquake regime south of Cape Mendocino is dominated by the San Andreas Fault. Even though this vertical strike slip fault takes up the complete northwestwards movement of the Pacific Plate, it is horizontally segmented. Locked sections alternate with creeping regions. Most seismologists think that this segmentation limits the size of the biggest earthquakes that can occur along the San Andreas. For really big quakes of magnitudes 8.5 and up, a fault has to rupture for several hundred miles - and none of the segments of the San Andreas Fault are that long.

The tectonic layout north of Cape Mendocino is completely different. There we have a subduction zone in which the Pacific dips beneath the American continent and dives into the Earth's mantle. Such zones are capable of generating the strongest earthquakes in the world, like last March's 9.0 in Japan or the 2004 earthquake off the coast of Sumatra, which had a magnitude of 9.1. The Cascadia subduction zone, which stretches between Cape Mendocino and the coast of the Canadian province of British Columbia, has also generated such megaquakes. The last one occurred around 1700. Were such a giant quake to happen today, its effects would not be limited to the sparsely populated Humboldt County or to Oregon and Washington. Its seismic waves would be strong enough to cause damage even in the Bay Area, although Cape Mendocino is 200 miles away. (hra073)