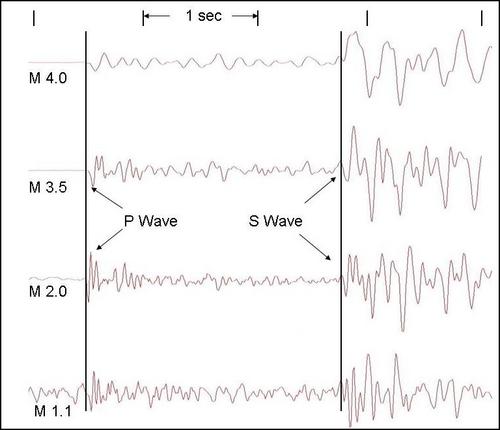 This morning the Bay Area literally woke up to a flurry of earthquakes. Between 5:30 and 6:30 am four temblors struck in the area around El Cerrito and Richmond Heights along the northern section of the Hayward Fault. The strongest of these quakes had a magnitude 4.0. This shaker rattled nerves and it even caused some very light damage, when glass and porcelain fell off shelves in a few homes near the epicenter. Despite the early morning hour, more than 13,000 people reported to the website "Did you feel it?", how they experienced the strongest quake of this series in their respective locations.

While the magnitude 4 shaker was felt all over the Bay Area, the smallest quake in the series was noticed only by a few people. It had a magnitude of just 1.1. Because the magnitude scale is defined as a logarithmic yardstick, a jump of one magnitude unit means that the amplitude of the earthquake's shaking measured by a seismometer increases by a factor of ten. As the difference in magnitude between the smallest and the largest of today's quakes is almost 3, the ground moved about one thousand times more in the 4.0 temblor than the little 1.1 quake. That is the reason, that the smallest quake was felt by only a few.

To the hundreds of seismometers deployed all over Northern California, however, this difference did not matter. Most of them are so sensitive, that they recorded all four earthquakes equally well. The figure shows the recordings of the four quakes by a broadband seismometer located in Orinda, less than 8 miles southeast of the epicenter. The trace on the top is the 4.0 event, the bottom trace shows the smallest quake. Each record is about 4 seconds long.

In each of the traces, the arrivals of the P- and S-waves are very clear. It took just 3.4 seconds for the P-waves of each quake to reach the seismometer in Orinda (first vertical black line in figure). As S-waves travel more slowly through the Earth's crust, they arrive about 2.2 seconds later (second line). The fact that the differences in travel time between P and S is the same for all four quakes is an indication that they all occurred at the same focus.

When looking at the waveforms of the traces, it seems as if the strongest event generated a gentle ground motion. The smaller the magnitudes get, the more wiggly the recording seems to be. This is a typical observation, because generally larger earthquakes radiate their seismic energy in a lower frequency than smaller quakes.

By now, the observant reader will have noticed, that there is something wrong with the figure. Didn't we say earlier, that the magnitude 4 event was about a thousand times stronger than the small 1.1 quake? How come then, that all four traces in the figure have roughly the same amplitudes? Well, the blogger digitally amplified the records of the smaller quakes, so that their amplitude "on paper" would match that the big event. If they had been depicted without that trick and had we shown the amplitude of the smallest event to be one inch, the waveforms of the large event would have been 83 feet tall - almost exactly the length of a typical high school basketball court. (hra074)