No Mulligans here: The next Big One will strike 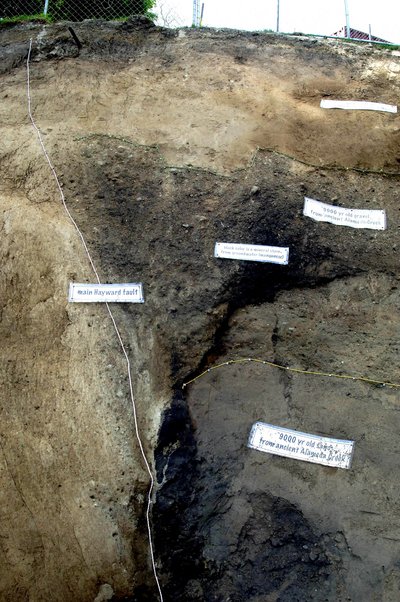 From trenches dug across fault lines, paleoseismologists can decipher the seismic history of a region. Shown here is the north facing wall of a trench across the southern Hayward Fault in Fremont. (Photo: Horst Rademacher - Click to view larger image.)

The series of small earthquakes, which shook the Bay Area two weeks ago occurred right under one of the more striking golf courses in the region. The Mira Vista Golf and Country Club in the hills of El Cerrito is not only known for its spectacular views of the Bay - hence its name. It is also one of the few golfing spots in the world, where tectonics and birdies meet. The course sits right on top of the northern Hayward Fault. If you strike a hole-in-one on the second hole, you may not necessarily claim only your talent or pure luck. Plate tectonics may have played a role, as the second fairway is essentially a section of the Hayward Fault, its direction determined more by the boundary of two lithospheric plates than anything else.

Because the golf course is tectonically so exposed, it is favored not only by golfers, but also by Earth scientists. In fact, much of what we know about the northern Hayward Fault stems from research conducted along and under Mira Vista's second fairway. One of the most important projects was a pair of trenches, dug by a group of researchers across the immaculate green. The goal of this big dig: Finding out how often in recent Earth history strong earthquakes had struck along the northern Hayward Fault.

If we want to know something about today's seismicity, we rely on digital recordings of seismometers. We learn about historic earthquakes from old newspaper articles, entries in the records of the California missions or reports by early explorers. However, in contrast to China or Japan, two seismically active countries with written histories going back millenia, the Golden State has only a very short tally. The oldest records in the Bay Area date back a mere 236 years to 1776, when Mission Dolores was founded in what is now San Francisco.

In earthquake history however, this time span of not even two and a half centuries is just a blink of an eye. The reason: Really big earthquakes of magnitude 7.5 or greater occur at any given spot along a faultline only every several hundred years. This long repeat interval poses a dilemma for "young" states like California. In order to estimate the probabilities of a strong shaker occurring, researchers need to know when the last few big ones ruptured certain sections of a fault line.

This is where paleoseismologists and their trenches come in. By exposing several meters of soil layers right on the fault trace, these researchers can count the number of previous earthquakes by analyzing characteristic patterns of disturbances within the layers left behind by big temblors. Fragments of charcoal or other dead organic matter buried within these disturbance allow them to be dated.

The results for Mira Vista: At least seven big quakes left their traces in the soil of the golf course. The last big quake shook the area sometime between 1640 and 1776. Given the typical movement of the fault of a few centimeters per year, another big quake seems imminent. This is one of the reasons that the northern Hayward Fault has the highest probability of all faults in the Bay Area that a strong quake will strike within the next 30 years. For a detailed description of the trench across the golf course, go here. (hra075)