Sent to Jail for Being Too Flippant 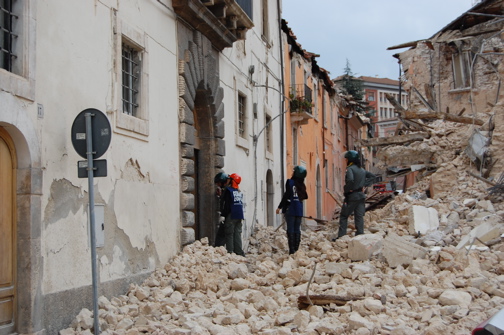 A few days ago, when a court in the Italian town of L'Aquila found six seismologists guilty of manslaughter and sent them to six years in jail each, Earth scientists all over the world were shocked. How can seismologists, who know very well that earthquake prediction is at best an imperfect science, be held responsible for not forecasting an earthquake? What effect will this verdict have on the future of earthquake science, and on the way seismologists interact with the public? Well, the story is not as easy as it seems at first glance.

Here is the background: On April 6, 2009 a moderate earthquake with a magnitude of 6.3 hit the Abruzzo region of Central Italy. More than 300 people were killed in the medieval town of L'Aquila alone and up to 10,000 buildings in the region were damaged or destroyed. During the weeks before, a number of smaller earthquakes had rattled the same area and a committee of eminent Italian earthquake specialists was convened to assess the situation. This National Commission for the Forecast and Prevention of Major Risks met in L'Aquila shortly before the earthquake. It is not known what the group discussed in its closed-door meetings. But in a news conference their members reassured the public that there was nothing to worry about, even though the string of smaller earthquakes continued to rattle the nerves of the people in the region.

The situation was made more complicated by a technician working in a government laboratory located near L'Aquila. He had observed that the concentration of radon in some groundwater wells had changed during the foreshocks. Because he had read somewhere that such a change may be an indicator for an upcoming quake, he went public and predicted a major disaster, even though he was not a seismologist and had not discussed his findings with any experts.

In its verdict the court said, that the members of the Commission had provided ``inaccurate, incomplete and contradictory'' information about the danger heralded by the tremors felt before the 6 April 2009 quake.

At a cursory glance, the verdict seems to punish scientists for not predicting the earthquake. Unfortunately, many media and much of the public reaction did not take a deeper look at what the court really said. The judges actually chided the commission not for their failure to predict an earthquake – but actually for just doing the opposite. In their public statements the commission did not focus – as they should have - on the well known seismic hazard in the Abruzzo area and the associated high risk given the many unreinforced, medieval buildings in L'Aquila. The court found the members guilty, because of their reassuring, risk-denying public statements. This gave the populace, according to the verdict, a false sense of security that led many people to stop expecting and preparing for a major earthquake.

The reaction of seismologists all over the world to this verdict was by no means unanimous: It is clear that at the current state of Earth science, earthquakes cannot be predicted with any degree of reliability. In some cases, radon levels have changed before an imminent quake; in many others, the radon concentration in groundwater did not change at all. The same is true for all other indicators which have been investigated as possibly having predictive value for earthquakes: None of them have worked reliably.

But no seismologist should use this lack of predictability to downplay the risk associated with earthquakes. For the very reason that destructive temblors can happen anytime in seismically active regions – be it in Japan, California or in Italy's Abbruzi - serious Earth scientists will always have a cautionary message for the public: Even though we can't tell you exactly when a quake will happen, you should not panic, but you must be prepared for a big one to strike at any time. The happy-go-lucky attitude apparently presented by the members of the Italian commission is not the right response. One can discuss whether a verdict of six years in jail is too harsh a term, but there is no doubt, that the commissioners acted irresponsibly in their public statements before the L'Aquila earthquake. (hra083)