Another Strong Earthquake Near Cape Mendocino 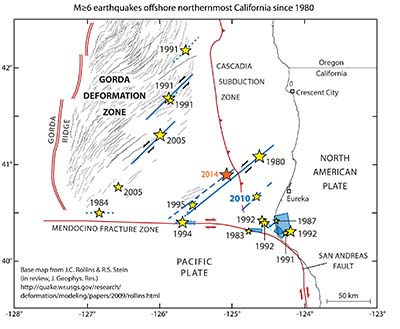 The epicenters of dozens of earthquakes with magnitudes greater than 6 dot this map of the tectonic situation near Cape Mendocino. The location of Sunday night's temblor is shown as an orange star. The earthquake labeled with a blue '2010' was described in a previous blog. (Map courtesy of Ross Stein, USGS) (Click to view larger image.)

Another strong earthquake occurred late Sunday night in the far northern regions of the State. The offshore magnitude 6.9 temblor was widely felt from Roseburg and Medford in southern Oregon all the way to the Bay Area and beyond. Although no significant damage was reported on land within the first several hours of the quake, residents in Humboldt County felt the shaking for dozens of seconds. The quake struck at 10:18 pm. Its hypocenter was almost exactly 50 miles west of Eureka on what is known as the Gorda Plate.

Sunday night's quake was located just north of this fracture zone inside the Gorda Plate. This area has to absorb a lot of mechanical strain, which makes it one of the most seismically active regions in the state. Since 1980 there have been at least ten strong earthquakes with magnitudes of 6.5 and above, including the one which shook the region on Sunday night. Taking all of these larger earthquakes and the thousands of smaller ones together, the region around Cape Mendocino has a very clear distinction among seismologists. When measured by the release of seismic energy, it is in fact the most active region of California, beating by far the active faults of the Bay Area and the seismically notorious Los Angeles Basin and its surrounding mountains. (hra090)