Figure 1. This animation shows the earthquakes, which occurred offshore of Northern Chile in the two weeks preceding the M8.2. The sequence culminated in Monday's event. (animation courtesy of GFZ Potsdam)

The great magnitude 8.2 earthquake, which struck Northern Chile in the early evening hours on Monday, April 1, 2014, was the strongest temblor in the world since late May last year, when a magnitude 8.3 event shook the Sea of Okhotsk in the Russian far east. Although the magnitudes of the two events are almost the same, there are hardly any similarities between these earthquakes. Last year the earthquake occurred more than 380 miles below the surface and belonged to a class of very deep earthquakes. Although such quakes have been known and recorded for almost a century, the actual physical processes which lead to rupture at this enormous depth are not yet fully understood. However, because they occur so deep underground, such quakes usually do not cause much damage on the surface.

Monday's quake however originated less than 20 miles below the surface, about 60 miles offshore of the Chilean harbor town of Iquique close to the border with Peru. It belongs to a class of shallow depth, thrust earthquakes in which one flank of the rupture plane rapidly slides upward with respect to the opposite flank. Most of the strongest earthquakes on the planet belong to this class of events, among them the Good Friday earthquake, which struck Alaska fifty years ago last week. Because of this rapid upward movement, such thrust earthquakes can generate tsunamis, when they occur offshore. Monday's temblor was no exception. 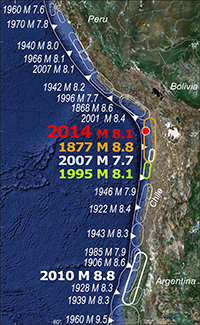 Figure 2. Strong earthquakes along the coast of Chile line up on this map like a string of chain links. The location of Monday's quake is marked in red. The last big quake in Chile had a magnitude of 8.8 and occurred in 2010 farther south (Read more from past blogs on March 1st and March 9th 2010). The largest earthquake ever recorded, a magnitude 9.5, can be seen at the bottom of the map. (figure courtesy of GFZ Potsdam)

However with a maximum height of about seven feet along the the sparsely populated north Chilean coast, its tsunami did not cause any significant damage. Although at least six people died as a result of the shaking by the seismic waves originating from this quake, the damage in the coastal towns close to the epicenter was very limited.

Seismologist had long assumed, that a strong earthquake would strike this region of Chile. The first indication that something was brewing offshore of Iquique came on March 16, when a magnitude 6.7 event struck in exactly the same region. Since then hundreds of quakes with magnitudes larger than 4 were recorded, culminating in the strong event on Monday. While the National Earthquake Information Center operated by the USGS in Golden, Co., determined its magnitude to be 8.2, other world-wide quake monitoring organizations like Geofon, run by the Deutsches Geoforschungszentrum (GFZ) in Potsdam, Germany, computed a slightly lower magnitude of 8.1 The location of the epicenter is marked as red dot on figure 2.

The last time a significant earthquake occurred in this region was in 1877, when a magnitude 8.8 event struck. The extent of its rupture is indicated by the orange oval in figure 2. In the time since that event, the tectonic stress generated by the subduction of the Nazca Plate under the huge South American plate has been accumulating in this area without being released by earthquakes. Seismologists call this build-up of stress along a tectonic boundary the development of a "seismic gap". On Monday, after accumulating for more than 130 years, this stress has been released and the last seismic gap along the coast of Chile has been filled. (hra091)