Rock and Roll in the Gem State

In the seismoblogger's California-centric view of the world, tectonic earthquakes in the US occur mainly along the West Coast and in Alaska, some big ones are generated by the volcanoes in Hawaii, and on a very rare occasion the vast area east of the Rockies is shaken by a significant temblor, like the one on August 23, 2011 when the major population centers in the East rocked to the beat of the waves of the magnitude 5.8 Virgina earthquake. 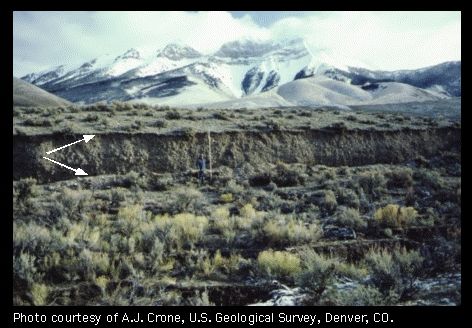 Figure 1: A magnitude 6.9 Earthquake in Idaho in 1983 caused a fault scarp up to 8 feet tall (between white arrows). Borah Peak, Idaho's highest mountain, is in the background.

However, a quake on Saturday morning served as a reminder that the seismogenic zones in the US are much more widespread than is commonly thought. Shortly after 10:44 am MST, most of Idaho was shaken by a magnitude 4.9 temblor, which originated 5 miles under the small town of Challis in Coster County in the center of the state. None of Challis' nearly 1000 inhabitants was hurt, but some houses suffered damage, rockslides blocked a road here and there, and the power was out for hours. The quake was felt 200 miles away in Idaho's capital Boise as well as in Montana's Bitterroot Valley.

According to the Idaho Geological Survey, Saturday's quake was the strongest so far in a series of shakers which began in March 2014. Since then the area around Challis has endured hundreds of slight to moderate temblors, among them a magnitude 3.7 shortly before Christmas. So far, it is not clear to geologists whether the quakes indicate new life on a dormant fault or if they are lined up on a hitherto unknown fault line.

A look into Idaho's earthquake history reveals that the recent series of quakes is by no means abnormal. For instance, on May 12, 1916, Boise was hit by a shock which wrecked chimneys and caused people to rush into the streets. Reclamation ditches were damaged and the flow of natural gas altered. It was felt at Loon Creek, 120 miles northeast, and in eastern Oregon - an area of 50,000 square miles. An intensity VII earthquake occurred within the state on July 12, 1944. The Seafoam Ranger Station building shook so hard the occupants thought it was coming apart. Several people reported that the shaking was so violent they were unable to walk. Another observer reported that rocks rose at least a foot in the air and looked like a series of explosions up the hill. Part of a canyon wall collapsed near Lime Creek. Cracks opened 100 yards long in Duffield Canyon and cracks one to three inches across and several hundred yards long opened on the road below Seafoam. Two chimneys fell at Cascade. This shock was felt over 70,000 square miles, including all of central Idaho, and parts of Washington, Oregon, and Montana.

In fact the strongest earthquake ever to hit Idaho in historic times occurred not far from the current epicenters near Challis, when on October 28, 1983 a magnitude 6.9 (the same strength as the Bay Area's 1989 Loma Prieta quake) occurred under Borah Peak, Idaho's highest mountain. The shaking was so strong that two people were killed in Challis, 11 commercial buildings and 39 private houses sustained major damage, and more than 200 houses sustained minor to moderate damage. Geologically, the most dramatic consequence of this quake was a 20 mile long zone of fault scarps and ground breakage. In some sections the ground was thrown off by more than 8 feet (see figure 1).

The mountainous area of Idaho where the earthquakes occur is part of the Central Idaho Seismic Zone (also called the Centennial Tectonic Belt). The zone is approximately 200 miles long by 50 to 100 miles wide and is characterized by rugged basin and range topography and the highest elevations in Idaho. The zone contains high levels of earthquake activity and at least 6 major active faults crisscross the region (see figure 2). (hra096)