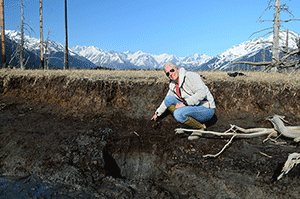 Alternating layers of tidal mud (grey) and soil (brown), here pointed out in the Girdwood Marsh, show the repeated cycle of subsidence and uplift caused by the megathrust earthquakes in Alaska. (Foto: Horst Rademacher) (Click to view larger.)

Although seismologists have made enormous progress in the last few decades in understanding the causes and effects of earthquakes, many mysteries still remain. Now compare our knowledge today to the state of seismology in the year 1964: Coordinated worldwide seismic networks were still in their infancy. Plate tectonics, today's standard in explaining the restless surface of the earth with its volcanoes and earthquakes, was still a very controversial hypothesis. Computers, which could be programmed to model the processes inside our planet, were few and far between and in addition they were excruciatingly slow. In short: Five decades ago, almost every major earthquake posed a great new challenge to researchers, forcing them to throw out old notions and raise completely new questions.

This was especially true for those giant quakes with magnitudes of 8.5 and above, which we now call megathrust earthquakes. This lack of understanding of the really giant quakes was about to change, when in the late afternoon today 51 years ago Alaska was rocked and rolled by a truly strong quake. With a magnitude of 9.2 this Great Alaska Earthquake of 1964 remains today the second biggest earthquake ever recorded. The largest, with a magnitude of 9.5, had occurred four years earlier in Chile.

This entry into the "Giant Temblor Hall of Fame" is not the only reason why the blogger thinks that this quake, which wreaked havoc in Anchorage and whose tsunami cost hundreds of lives along the southern cost of the northernmost State, deserves a look back on its anniversary. The main reason is that by studying this quake, scientists were for the first time able to convincingly connect plate tectonics and earthquakes. 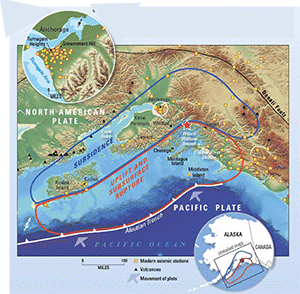 The Great Alaska Earthquake of 1964 caused a great arc of subsidence (blue) and a large area of uplift (red). The yellow squares, including those in the inset in the upper left, depict current seismic stations. (Source USGS Fact Sheet 2014-3018) (Click to view larger.)

This connection was mainly the work of one Earth scientist, who wasn't even an expert in seismology. A day after the quake, the USGS sent George Plafker to Alaska, who was then a young geologist. His mission was to tally the devastation the quake had caused, and also to note how the effects of the temblor had changed the Alaskan landscape. After a few days in the field, he noticed a curious pattern of subsidence and uplift over a large area of Alaska. Along the southern coast the land was uplifted by 30 feet or more, further inland, in a sweeping arc encompassing the Kenai Peninsula, Kodiak Island and the area around Anchorage, the land had subsided by up to 7 feet.

At first, this pattern didn't make sense to Plafker, but a few weeks after the quake he found a convincing explanation. Plate tectonics predicted that the Pacific Plate moves to the Northwest and dives under the North-American continent along the Alaska coast. Because this process is neither smooth nor nicely lubricated, the movement would cause the two plates to stick to another. During its dive the Pacific would grab pieces of the North American plate and drag them along into the abyss of the Earth's mantle. As a consequence, over the years the land along the immediate coast would subside at a substantial rate, while at the same time the countryside further inland bulged upward. The earthquake finally releases the two interlocked plates and the segments of earth crust jump back into their original positions: Hence the observed uplift long the coast and subsidence further inland.

It is this jumping up of the land which scientists now call a thrust - and if the jump is big enough, it gets the name megathrust. As the pattern measured by Plafker showed, the Alaska earthquake of 51 years ago today, was indeed the first megathrust ever measured. The devastating quakes of the past decade, like the Sumatra earthquake of 2004 or the Tohuku quake of 2011 also belong to the same category. (hra099)