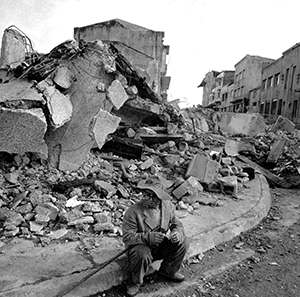 A forlorn man sitting amongst the rubble in the city of Valdivia after the 9.5 quake in 1960. Source: Press Association
(Click to view larger image.)

The 21st of May 1960 was a Saturday and in Chile most people were preparing for the traditional commemoration of the Battle of Iquique, a naval battle which Chile lost against Peru during the War of the Pacific at the end of the 19th century. Suddenly, at two minutes after 6 am local time, the Earth under the coastal town of Concepcion began to shake violently. A few minutes later, after this 8.3 magnitude earthquake was over, 125 people were dead and a third of the buildings in town lay in ruins. Chile's President Jorge Alessandri called off the festivities and started to coordinate the emergency response to this very severe quake. The responders were interrupted by dozens of aftershocks, whose epicenters slowly migrated south from Concepcion. The strongest aftershock at 2:55 pm on Sunday reached a magnitude of 7.9.

But nobody knew that the worst was yet to come. Exactly 16 Minutes after the severe aftershock, the Earth literally opened up. Within the next ten minutes two separate 8.6 events merged into the largest earthquake the modern world had ever seen. A fault line, more than 600 miles long ruptured and left devastation, destruction and a giant tsunami in its wake. When it was over, the busy harbor town of Valdivia was flattened and entire coastal villages had disappeared. Further inland, giant landslides had buried villages and towns. The tsunami, caused by this monster quake, wreaked havoc all across the Pacific, from Hawaii to Japan and Alaska. For several days after the earthquake, the whole Earth rang like a bell. It even caused a slight hiccup to the unstoppable rotation of our planet, making the days a few milliseconds shorter. According to modern calculations, this Great Chile Earthquake of May 22, 1960 had a moment magnitude of 9.5, which makes it the largest earthquake ever recorded, bigger even than the Great Alaska Earthquake of 1964, which registered 9.2 on the world record scale. 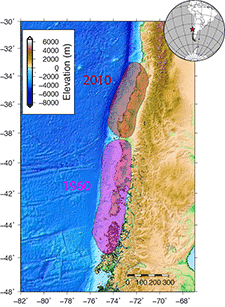 This map shows the rupture areas (pink) of the last two giant earthquakes in Chile, the 9.5 quake of 1960 and the 8.8 quake of 2010. The black and white distance scale is in kilometers.
Map by Diego Melgar, BSL.

Chile is not only the longest country on Earth, it is also one of the most earthquake prone nations. The entire coastline, which stretches for more than 2600 miles in the north-south direction, is dominated by the collision between the Nazca Plate and the South American continent. From a plate tectonics point of view, South America is relatively stable, but the Nazca Plate is pushing eastward at a rate of approximately 2 inches per year. Because the Nazca Plate carries mostly oceanic crust, it is denser than the mostly continental South America. Hence in this collision it is pushed down into the Earth's mantle in a subduction zone, technically also called a Wadati-Benioff zone.

This downward movement not only causes tension in the sinking plate itself, which leads to some of the deepest earthquakes in to world. It also puts a huge amount of mechanical strain on the western edge of South America. Every once in a while, like during the fatal days in May 1960, this strain is released in a sequence of giant temblors, which cause the Earth to ring. In fact, during the past 150 years or so, Chile has had more giant quakes with magnitudes of 8 and larger than any other region in to world. During the lifetime of this blog alone, a magnitude 8.2 struck in April of last year and a magnitude 8.8 caused major destruction early in 2010.

Looking at it from a geologic, that is very long term perspective, the 2010 M8.8 temblor was actually a sequitur of the giant quake 50 years earlier. As our map shows, it ruptured a part of the Chilean coast immediately north of the gigantic rupture plane of the 9.5 earthquake, which happened 55 years ago today. (hra106)