It Doesn't Get Deeper Than That

When on Saturday evening (local time) skyscrapers swayed, the power went out and trains were stopped in Tokyo, people feared for the worst. The memories of the giant earthquake of March 2011 were still too fresh. Four years ago a huge tsunami inundated the east coast of Japan and caused a partial meltdown of the reactors of the Fukushima nuclear power plant. But after a minute or so of anxiety on Saturday, no tsunami alert was issued and the trains on the Shinkansen lines, Japan's iconic high speed rail, began running again. Although the quake's strength registered with a magnitude of 7.8 - the same as the devastating Nepal event a month ago - only a few injuries and hardly any damage were reported. 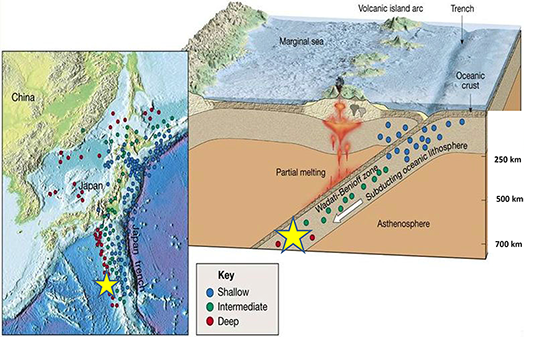 Saturday's record quake (yellow star) occurred in the Bonin Arc south of the Japanese Islands and west of the Japan trench. It occurred at a depth of more than 420 miles. (Click to view larger image.)

When the shaking was over people in Japan continued with their regular weekend business, but seismologists all over the globe looked at the recordings of this earthquake in awe and utter surprise: Saturday's quake was the deepest temblor of its size ever measured. The calculations of scientists in various observatories monitoring the seismicity of our planet put the focus of this quake between 418 and 433 miles beneath the surface - thereby setting a new world record for deep earthquakes of magnitude 7 or greater.

Such deep earthquakes are not only a rarity, but their mechanism is a physical oddity when compared to the shallow earthquakes in most other seismically active zones. Deep earthquakes occur only in very few regions in the world - where one of the tectonic plates floating on the surface of the Earth dives under another and is submerged into the Earth's mantle. Here in California, tectonic plates slide past each other in a stick-slip fashion. In other places around the Pacific Rim, however, one of the plates dives deep into the mantle in what is called a subduction zone. Alaska and the Aleutian Islands, Japan, the Philippines, and the South Sea Islands of Fiji, Tonga and Samoa - they all have their own subduction zone, where the Pacific Plate dives several hundred miles deep into the Earth.

Looking at the mechanism of a regular earthquake, which is the fracture of brittle rocks in the upper parts of the Earth's crust, temblors should not happen at these depths at all. There the temperature reaches several thousand degrees Fahrenheit which even under the pressures exerted by the overlying strata, causes rocks to become plastic like silly putty or outright molten in the form of magma. Brittle fractures simply cannot happen in such moldable rocks. But as Saturday's quake showed, such deep earthquakes do occur indeed.

So, what's happening down there? There are several hypotheses that try to explain how such deep earthquakes are generated. The most widely used idea has to do with volume changes associated with the mineral structure of certain rocks. Imagine putting a bottle of beer into the freezer section of your fridge. If you leave it there for too long, you might end up with a mess, because the bottle has shattered. The reason: The ice, which forms when water (or beer) freezes, has a lower density than the water itself. Even though the difference is only about 7 percent, it causes ice cubes to float when you add them to your drink. It also means that when one quart of water freezes the resulting ice needs 7 percent more volume. The forces exerted by the phase transition from water to ice are large enough to shatter a bottle, if it doesn't give the ice enough room.

A similar thing happens in the Earth's mantle. At several hundred miles depth, the mineral olivine undergoes a phase transition and becomes spinel. Although chemically identical like water and ice, these two minerals have different densities, also about 7 percent. Spinel however is denser than olivine. Hence, when spinel forms from olivine it leaves a void in the rock and the result is an implosion, which suddenly lets the rocks collapse. This collapse generates one of those unusually deep earthquakes. Because below 450 miles all olivine has morphed into spinel, no more earthquakes happen below this depth. (hra107)