A Plume, a Blob, a Volcano

The Hawaiian Archipelago, the quintessential island dream for many tourists and vacationers is also a unique "dream island" for Earth scientists. Its active volcanoes, most and foremost Kilauea, which has been continuously spewing lava for more than 30 years, are a unique window into the deeper regions of the Earth. There is, however, at least one scientific enigma about Hawaii and its fiery mountains: Why are there active volcanoes somewhere in the middle of the vast Pacific Ocean, thousands of miles away from the nearest volcanically active plate boundary? 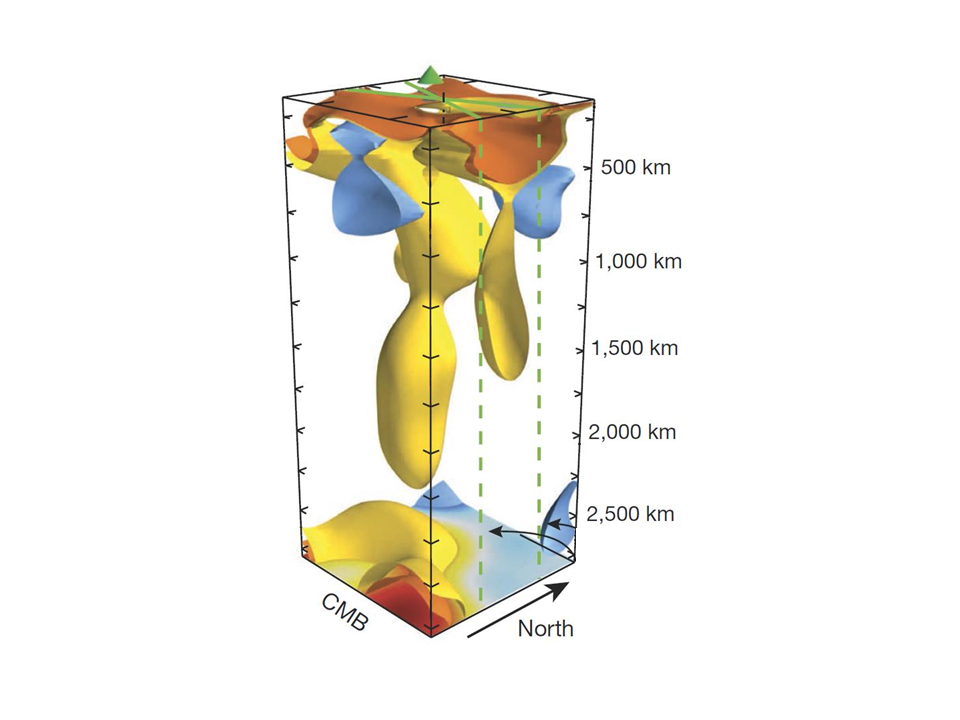 The plume under Hawaii is shown in yellow. It reaches from the boundary between the core and the mantle at the bottom of the picture (CMB) to a much shallower depth where it fans out. The green triangle on the top represents the Hawaiian volcanoes. (Source: 2015, Nature, 525, 95-99, doi:10.1038/nature14876

More than four decades ago, on March 5, 1971 to be exact, a geophysicist from Princeton, proposed a solution to this dilema. The volcanoes in Hawaii, wrote W. Jason Morgan in a paper in "Nature", are fed by a hot spot, a blob of hot magma coming from deep within the Earth. Since he published his hypothesis, dozens of features in Hawaii and at many places elsewhere on Earth were discovered, which strongly support the hot spot idea.

But again, one fundamental question was left unanswered: Where are the roots for these rising magma plumes, which feed the volcanoes. Even after fourty years, this is still the subject of a vigorous, sometimes even heated debate among Earth scientists: Do the plumes feed from magma reservoirs in the upper mantle of the Earth at a depth of a few hundred miles, or do they reach all the way to the boundary between the Earth's mantle and its core, 1800 miles beneath our feet. And also: What are the actual shapes of such plumes? Are they shaped straight like chimneys or do they fan out somewhere on their way to the surface of the Earth.

The answers to these questions, as academic and esoteric as they look at first glance, are of great importance in our still rather limited understanding of the heat engine which drives plate tectonics and hence generates deadly earthquakes and tsunamis. If the plumes have shallow roots, the mechanism pushing the plates all over the Earth's surface does not involve the whole mantle. A deep root on the other hand would indicate a huge heat engine with convection currents all the way down to the Earth's core.

Supercomputer simulation of plumes of hot rock rising through the mantle to the surface, where they generate volcanic eruptions that form island chains. Animation by Scott French, NERSC & Berkeley Lab; video by Roxanne Makasdjian and Stephen McNally, UC Berkeley

Using the recordings of almost 300 strong earthquakes, which shook the globe over the past 20 years, and weeks of computing time on a cluster of supercomputers at the Lawrence Berkeley Lab, two researchers from our own Berkeley Seismological Laboratory seem to have found answers. In today's issue of "Nature" Barbara Romanowicz and Scott French describe the plumes in detail: They clearly originate at the core-mantle boundary. The researchers were surprised when their computations showed that the plumes are not as thin as a chimney but are at least 400 miles across in their lower part. At a depth of about 600 miles the plumes become even broader and begin to fan out. The actual hot spots at the surface - the volcanoes - are then fed from these spread out magma blobs.

The technique, which Romanowicz and French used to peer into the interior of the Earth in such detail, is called seismic tomography, which is similar to a CT-Scan in medical diagnostics. While the mathematical techniques to generate three dimensional pictures of something normally invisible are the same in imaging the innards of a human body and the inside of the Earth, there are differences: The X-rays used in medicine are absorbed differently by different tissues in the body. In the Earth's interior, however, seismic waves slow down slightly, when they pass through a hotter medium - like the magma inside a plume. These tiny differences in the travel times of all kinds of seismic waves are the basis for the current research. Buy using the supercomputers, the two researchers converted them into the first ever complete CT-Scans of the plumes under the Pacific Ocean and other volcanic regions on Earth. (hra109)