Earthquakes don't happen accidentally. Instead, temblors occur only when a normally delicate balance of forces within the Earth's crust suddenly goes off-kilter. At least one of these forces, the tectonic push which is ultimately driven by the endless drift of the lithospheric plates, tries to break apart the rocks underneath our feet. Others, like friction, shear strength, or the weight of the overlying rocks, act as defensive linemen, counteracting the tectonic push. Most of the time, these and other forces are in an equilibrium. However hair-raisingly tight this equilibrium may be, its keeps the rocks to stay put and let's Mother Earth not produce any major quakes. However, the moment the plate tectonic drive becomes too strong, the defensive forces collapse and an earthquake occurs. The process leading to such a temblor is the same, no matter if the result is a small shaker along the Hayward Fault or a megaquake like the one off the coast of Japanese Honshu in March 2011. 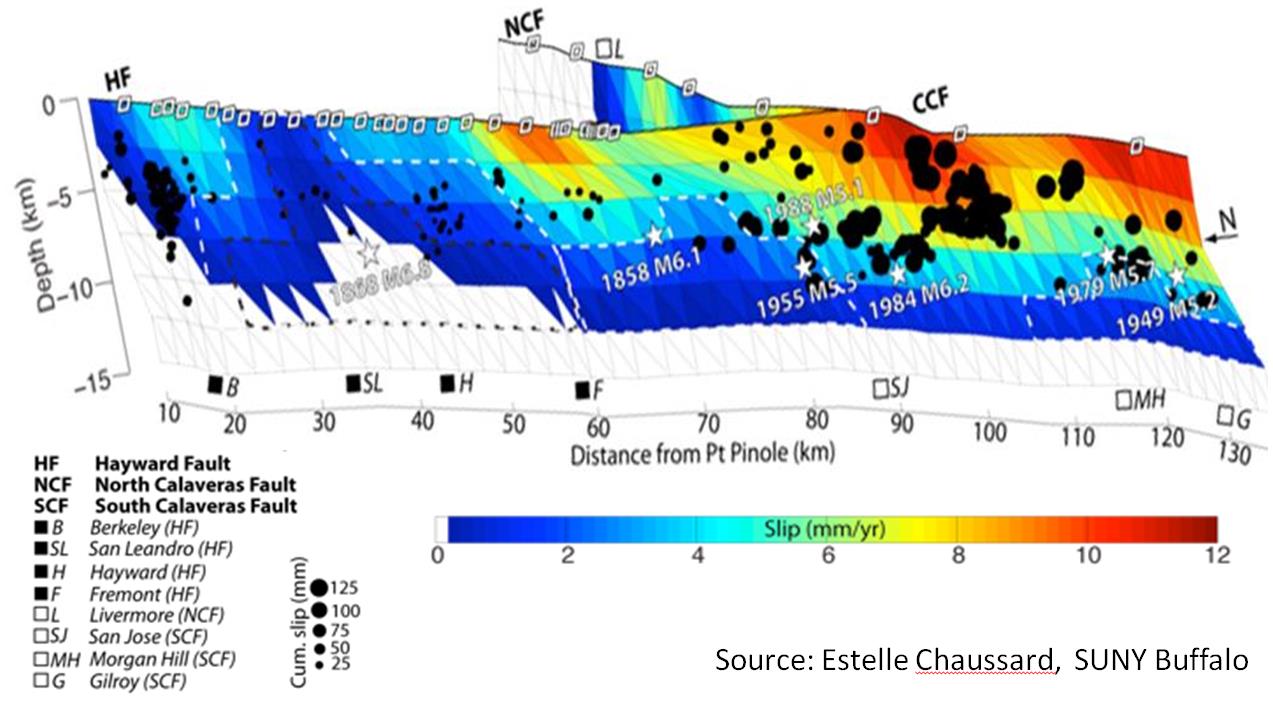 This cut through the Earth's Crust along the Hayward Fault (from the North on the left to the South on the right) shows a model of the movement of the fault. In red areas, the two sides of the fault move up 12 millimeter per years past each other. In the blue area there is little or no movement at all. Such movements are an indirect measure of the stress accumulation along the fault: The smaller the movement, which is also called aseismic creep, the more stress builds up.

If we seismologists could only measure in detail all of these forces or the various mechanical stresses each of them exerts on the rock, we would certainly be able to better forecast earthquakes. But such measurements are far from trivial. Take the Hayward Fault for example, which runs for almost fifty miles through one of the most densely populated regions in California. We would need to drill into the fault every few hundred feet or so. Each of these drill holes would have to reach to a depth of approximately eight miles and needs to be equipped with a string of a dozen sensors to measure the stresses. Given the current drilling and sensor technology, such a system could not be realized even if one throws all available money in the world at it.

Lacking the direct measurements we have to extract information about the stresses acting along an earthquake fault via various detours. However, none of these pathways has proven very reliable and the results are often contradictory. One of the strange paradoxes resulting from such stress investigations along faults is that even strong earthquakes don't necessarily relieve a lot of mechanical stress. Instead of resulting in a much less stressful environment, the actual stress drop caused by a temblor can be ridiculously low, even if when the quake had a large magnitude.

Jeanne Hardebeck, a research seismologist at the US Geological Survey in Menlo Park, has now looked at the stress regimes encountered in the areas, where the biggest earthquakes in the last two decades occurred on the planet. These are the subduction zones around the Pacific. While using the orientation of fault planes of smaller earthquakes which occur there, she finds that it actually doesn't take that much force to generate a megaquake. As she writes in the journal Science the frictional forces - the defensive linemen - holding together a subduction fault are actually surprisingly weak. However, in contrast to common intuition, the Earth's crust in such subduction zones is similarly weak. This means that the sum of the various forces acting on it are less strong than anticipated. Hardebeck's findings suggest that the Earth generates its most devastating earthquakes along rather weak faults which are located in very low stress environments. If these results get confirmed along other faults, it seems that we still have a long way to go to fully understand the interplay and the strength of forces necessary to generate an earthquake. (hra110)