When two earthquakes with magnitudes of 7.6 struck the Latin American country of Peru on Tuesday evening (local time) within five minutes of each other, one had to fear for the worst. After all, in contrast to its southern neighbor Chile, Peru is not known for its earthquake resistant structures and strictly enforced building codes. But, although the shaking of both quakes was widely felt across western South America, it caused hardly any damage. Even in the epicentral region in the sparsely populated Peruvian jungle near the Brazilian border to the east of the Andes, no buildings collapsed. The head of Peru's emergency services, Alfredo Murgueytio, was quoted by Reuters as saying that "there are no damages reported." Several residents of the Brazilian city of Brasileia, 150 miles east of the epicenter, told the same news agency, that they felt the ground shake and that chairs and tables rattled during the quake, but that there was no visible damage.

At first glance, the absence of any significant damage was very surprising. After all, the single quake which occurred earlier this year in Nepal wreaked havoc in Kathmandu and other areas of the Himalayas . It had a magnitude of 7.8 and hence was only slightly stronger than Tuesday's double temblor. 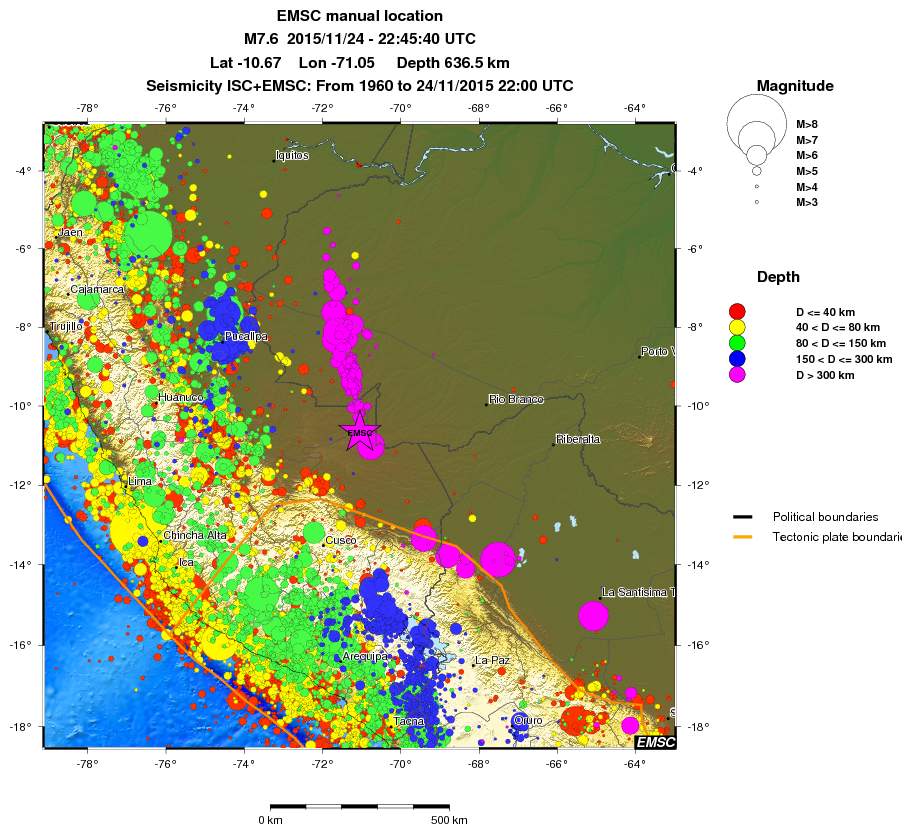 The locations of earthquakes in Peru is shown here in a color code: Shallow quakes are shown in red, somewhat deeper quakes in yellow and green. All quakes with a focal depth of 150 miles are shown in pink. The epicenter of Tuesday's doublet is indicated by the pink star. (Source: EMSC)

What is so different about these two earthquakes in Peru and the one in Nepal? The Nepal quake caused massive destruction with over 9000 casualties while the doublet on Tuesday hardly damaged anything at all. The main reason for the mild effects of the two Peruvian earthquakes was their focal depth. While the Nepal earthquake had its origin less than 10 miles below the surface, seismologists at several seismological centers around the world calculated the depth of the Peru double quakes to be between 375 and 400 miles below the surface. By the time seismic waves from such deep earthquakes reach the surface, they have lost a lot of their initial energy.

Think about what would happen when an earthquake with a magnitude of 7.6 were to occur in the Los Angeles area. While we are sure that it will cause quite a bit of damage in the epicentral region down south, we do not expect this earthquake to cause significant structural damage in the Bay Area. The seismic waves may be felt in our area around the San Francisco Bay, but they will have lost much of their punch on their almost 400 mile long journey way northward. It so happens that the distance between San Francisco and LA is similar to the depths of Tuesday's earthquakes in Peru.

While deep earthquakes like the two on Tuesday under Peru are usually rather gentle on buildings and structures on the Earth's surface right above their focus, they can be felt over a surprisingly large area. A magnitude 8.2 quake, which had its source almost 450 miles below Bolivia in 1994, made skycrapers in Toronto sway. Similarly, the deepest earthquake ever measured, the magnitude 7.8 quake in the Izu-Bonin-Trench in late May this year, caused a slight swinging movement of a 50 story building in Pasadena. The distances between Bolivia and Toronto and the Bonin Trench and Southern California are 4500 and 5500 miles respectively.

What is the reason for such ultra-long distance effects? In contrast to shallow focus quakes, the seismic waves of deep temblors do not have to travel through the Earth's crust on their way to distant locations. They start their journey in the Earth's mantle. Compared to the Earth's crust, this section of the Earth's interior is much more homogeneous, and therefore attenuates seismic waves much less strongly than the more heterogeneous rocks of the crust.

In summary: deep earthquakes usually cause less damage than shallower ones, but they can be felt over much, much longer distances. If you happen to be in a skyscraper which gently rocks from side to side, the motion is not necessarily due to the wind. The swaying of a tall structure can be caused by seismic waves from an earthquake continents away. (hra112)