It seems that the trembling Earth under the Apennine mountains of Central Italy does not come to rest. The most recent earthquake on Sunday morning (local time) had a magnitude of 6.6. It destroyed dozens of historic buildings, among them the large Basilica of Saint Benedict in the town of Norcia, which is famous for its medieval wall. Many houses already weakened by the dozens of quakes occurring in the Italian regions of Umbria, Abruzzo and the Marches during the previous months collapsed. Several dozen people were hurt by the crumbling walls. However, as of this writing, nobody had perished in the latest temblor. Sunday's quake is by far the strongest in the latest sequence, which started last week with a magnitude 6.0 quake several miles further north. Looking at the behavior of the quakes in the central Apennine over the past few years, one can detect a clear pattern: Like a set of falling dominoes, the epicenters are steadily migrating northward. 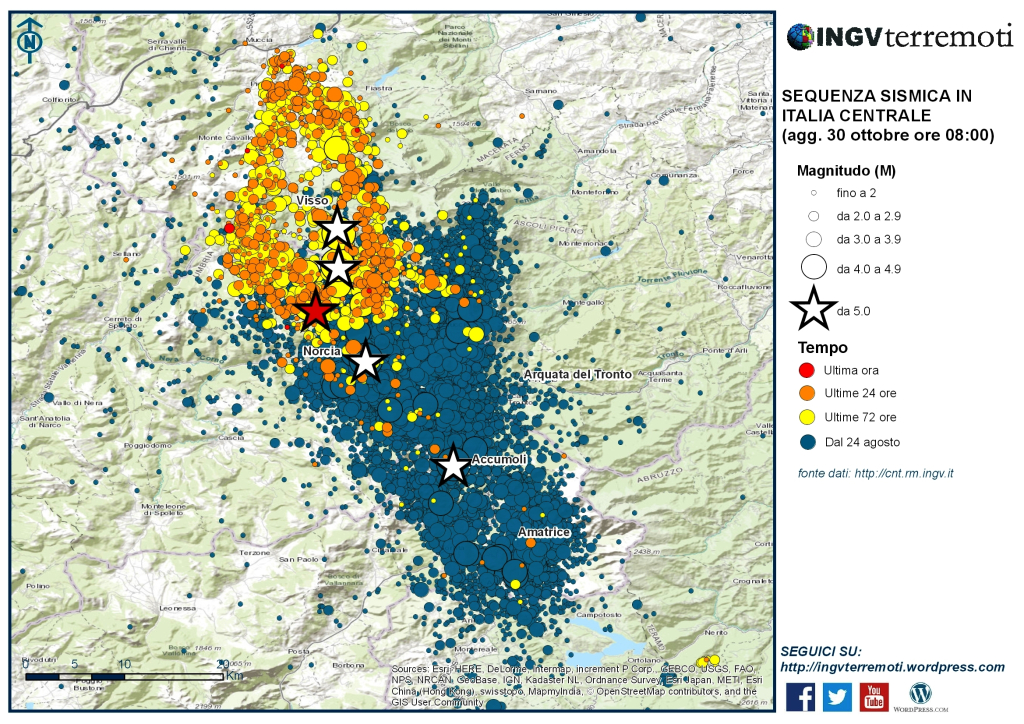 This epicentral map clearly shows the migration of quakes in the Central Appenines. Blue epicenters are events from the sequence in August and September, in which 300 people were killed in and near Amatrice. The events of last week are shown in yellow and orange. The location of Sunday morning's main shock is depicted as a red star. Source: INGV Italy

As we have often explained in this blog, Italy's earthquakes are a direct consequence of the collision between the African lithospheric plate and the European plate. However, this collision zone is not a clear, simple line of demarcation comparable to the San Andreas Fault here in California, which separates the Pacific from the North American plate. On the one hand, Italy itself is a protrusion of the African plate, thrusting into Europe like a javelin. In addition, over millions of years the European-African collision has produced many fragments of the earth's crust in the Mediterranean region, which we geophysicists call microplates. Examples are the Hellenic microplate in the Eastern Mediterranean, which carries Greece and Asia Minor, and the Adriatic microplate, which separates Italy from the Balkans.

The force of the collision between northward drifting African continent and Europe squeezes the microplates and causes them move every which way. The 750 mile-long Apennine mountain range is the conseqeunce of such wayward motion. These moutains formed when the westward moving Adriatic microplate crashed into the Italian mainland. Currently, however, the motion of the Adriatic microplate in this direction has ceased. Instead the Tyrrhennian microplate is pulling on Italy from the west. This force pulls the Apennines apart at the extremely slow rate of fractions of an inch per year. Most of the significant earthquakes in Central Italy during recent decades show corresponding movement of the faults. Sunday's temblor is no exception to this so called normal faulting.

The tectonic pull from the west puts the entire mountain range under mechanical stress and one quake alone is not enough to release all of the tectonic loading. Many quakes along the range are needed to completely compensate for the stress. This is the main reason that earthquakes have been occurring under the Apennines for hundreds of years. Each of the quakes - none bigger than magnitude 6.5 or 6.6 - releases the tectonic stress in one relatively small region of the mountain range. These regions are called fault planes and usually do not extend for more than 15 or 20 miles along the spine of the Apennines.

While these quakes help to release the overall stress along its plane of rupture, imagine what happens at either end of the fault plane. There the area newly freed of its tectonic stress meets a region which may still be under a lot of force. It seems only logical that such a zone of contrasting mechanical loads becomes a new focal point. The stress concentration is so high that it becomes capable of initiating or triggering a new earthquake. This in turn can release the stress in the adjacent region. Hence, each new quake follows the last one in the direction of the region of still-existing stress — like one domino falling onto its neighbor and making it fall as well.

The classical textbook example of such a domino effect, which scientists call "migrating earthquakes," is the North Anatolian Fault in Turkey. This horizontal strike-slip fault runs for approximately 1000 miles from Eastern Turkey all the way into the Aegean Sea. Since 1939 more than 10 temblors with magnitudes greater than 6.7 have ruptured along this fault. However, these catastrophic earthquakes were not randomly distributed. Instead, they showed a clear westward pattern of migration. The quake that leveled the city of Erzincan in 1939 occurred at the very eastern end of the fault and ruptured the fault plane for more than 120 miles towards the west. The next strong quake in 1942 occurred just to the west of the 1939 rupture. It in turn was followed by more strong quakes, each happening further west than its predecessor. The latest quake in this "series" was a temblor in 1999, which devastated the City of Izmit at the eastern shore of the Sea of Marmara.

A similar migration seems to be taking place in the Apennine mountains. Since the earthquake in 2009 which devastated the historic town of L'Aquila, the epicenters of all significant quakes have moved northwards. Amatrice, the focal point of a destructive quake this past August, was 25 miles to the north of L'Aquila. Norcia, Sunday's epicenter, is 20 miles north August's quake. If this pattern continues, the next big temblor in the Apennines may be very close to the bigger and more populous towns of Assisi and Perugia. (hra129)