The Quake of the Kalahari

An extremely unusual earthquake occurred in southern Africa Monday evening around 8 pm (local time). The tremor with a magnitude of at least 6.5 struck a very remote region of the Kalahari desert in Botswana, as indicated by the yellow dot in the center of the Google Earth map. The seismic waves were felt in the country's capital Gabarone about 150 miles from the epicenter as well as in South Africa's largest city Johannesburg, which is almost 700 miles further south. It was the strongest quake to hit this region since serious seismic monitoring began in southern Africa about 70 years ago. 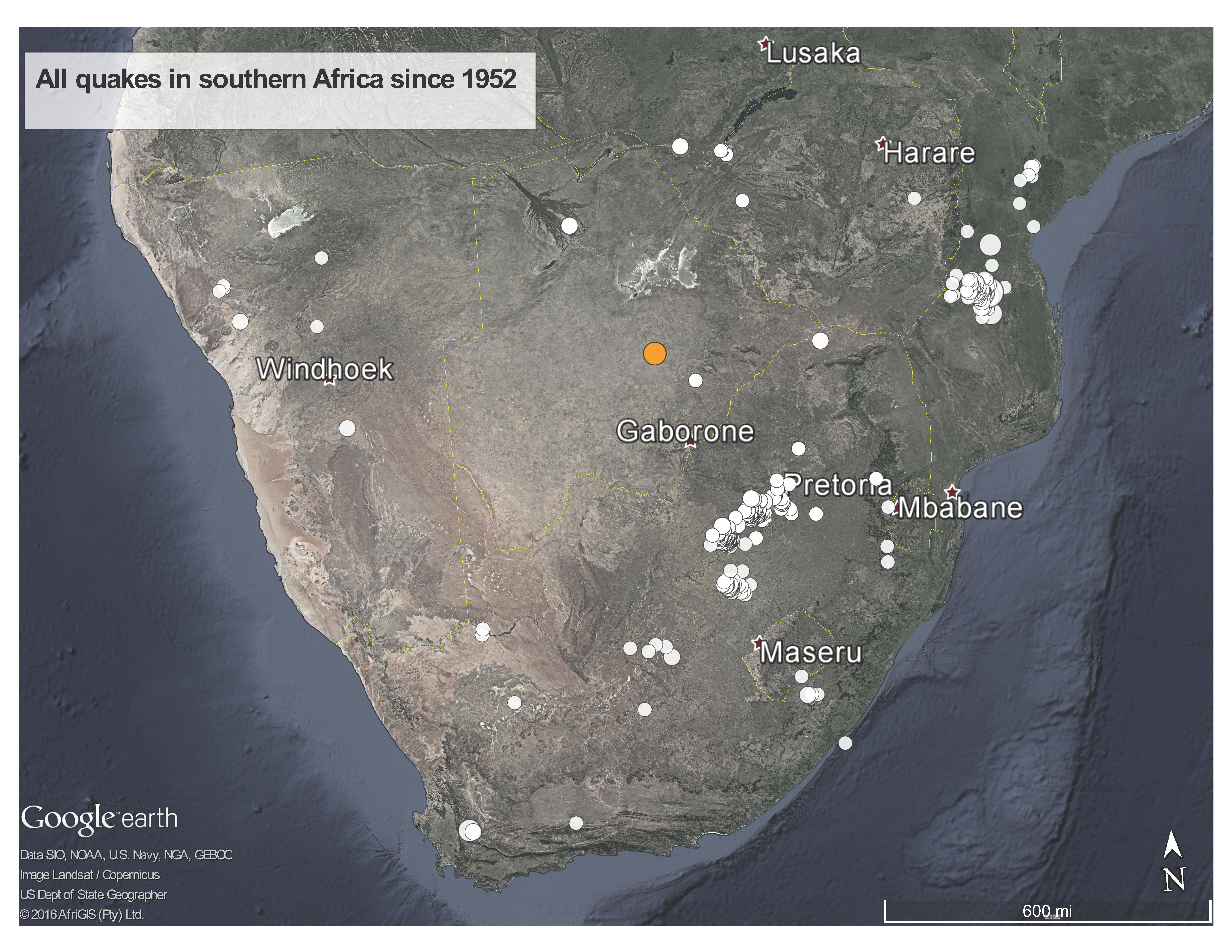 Figure 1:This map shows all earthquakes recorded in southern Africa in the last 65 years. The yellow dot in the center depicts the epicenter of Monday's quake in Botswana. The cluster of quakes southwest of Pretoria, the capital of South Africa, is not caused by tectonic activity. They are quakes induced by gold mining in this area.

The southern section of Africa is certainly not known for seismic activity. Instead, the seismicity in this continent is concentrated in two regions, one in the east and and one north of the Sahara. The most destructive quakes in Africa occur in the seismic zone along the southern coast of the Mediterranean Sea, which stretches from Morocco all the way to Egypt. More than 15,000 people were killed in the infamous Agadir earthquake, which struck western Morocco in 1960. Another 5000 people lost their lives in the El Asnam quake, which occurred in Algeria 20 years later. The earthquakes in the far north of Africa are the result of the collision between the African Plate and Europe.

The other seismically active area in Africa extends along its eastern margin.Along the East African Rift, which reaches from Djibouti at the Golf of Aden through Ethiopia, Kenya and Tanzania deep into Mozambique and Malawi, Africa is splitting apart. This rift demarcates the boundary between the Indian Ocean plate, which is tugging eastward and the relatively stable African plate. This tugging is causing a huge crack in the continental crust. Earthquakes, active volcanoes and the beautiful landscapes around Lake Victoria are the results. However, the earthquakes there are comparatively mild and usually not very destructive. The deadliest tremor in this region had a magnitude of 5.9 and struck in 2008 under Lake Kivu in the border area between the Democratic Republic of Congo and Rwanda. More than 40 people lost their lives.

In contrast to its east and extreme north, the southern part of Africa is actually one of the oldest and most stable continental platforms on Earth. That is particularly true for Botswana, Namibia and the northern part of South Africa, where hardly any quakes were recorded in the last 70 years at all. Botswana had only two noteworthy quakes, one magnitude 5.8 event in the northwest of the country in 1952 and another in 2002 about 80 miles southeast of Monday's temblor. That event registered with a magnitude of 4.5.

While these earthquakes are extremely rare, they are not unexplained. In the technical jargon of seismologists they are called "intraplate earthquakes". The naming comes from the fact that they occur far from any plate boundary, which are the seismically active regions of the planet. A simple explanation for the occurrence of these intraplate quakes is the fact that even the stable crust of the Earth in the middle of a plate can accumulate mechanical stress, when it is tugged and beaten by plate collisions at its borders. Occasionally, this stress is then relieved in an earthquake. In fact, there is an area of intraplate earthquakes in the United States as well. In 1811 and 1812, the region in the Mississippi Valley, where Tennessee, Arkansas, Kentucky and Missouri meet, was shaken by a series of very strong intraplate quakes (see blogs on 15 and 21 December 2011). (hra137)