It was a very long hiatus, almost too long. The Hayward Fault, one of the most active faults in the San Francisco Bay Area, has lately been eerily quiet along its northern section. Almost four years have passed, since the last slight seismic shaking was felt anywhere along the fault north of the Caldecott Tunnel. Some of us seismologists working on the campus of UC Berkeley were beginning to become suspicious about the long period of quiescence. But on Wednesday at 20 seconds past high noon (PDT) the seismic dry spell was broken. A magnitude 3.0 earthquake occurred on the fault under Kensington, an unincorportred community just north of Berkeley. The quake was strong enough to be felt everywhere around San Francisco Bay and even near Modesto in California's Central Valley. Within the first 3 hours after the quake, more than 3300 people reported that they had felt the quake to the "Did You Feel it" website, operated by the United States Geological Survey (see accompanying figure). The shaking also rattled every desk in our Berkeley Seismological Laboratory, which is located only 1500 feet from the fault line. 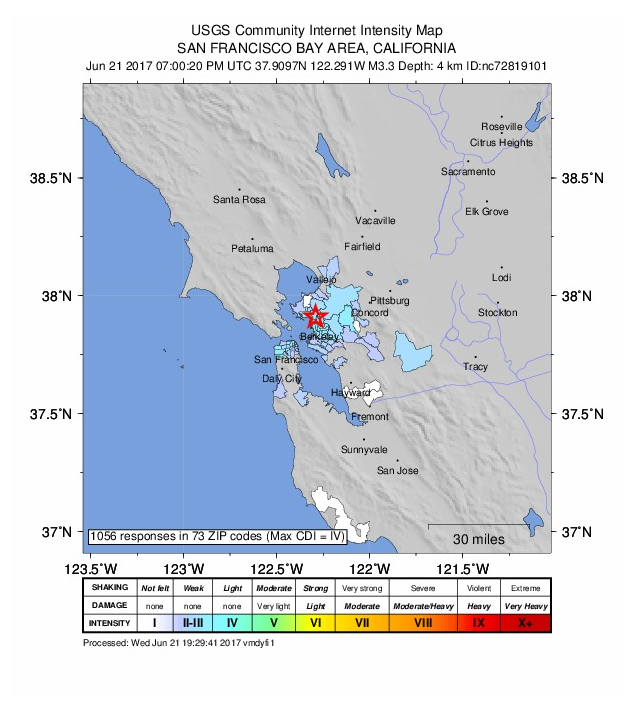 The Fault, named after the city of Hayward, streches for 50 miles from the northeastern suburbs of San Jose all the way into San Pablo Bay. "Did You Feel It?" map from USGS.

The reasons that seismologists worry about unusually long periods of seismic quiescence are twofold. One has to do with the physics of the Earth, the other with the psychology of people. Let's talk about the physics first. The Hayward Fault, which cuts through one of the most densely populated regions of the Bay Area along the foot of the East Bay Hills, is part of the boundary between the Pacific and the North American plates. The relentless drift of the Pacific plate to the northwest is the engine driving the seismic activity on all Northern California faults, including the Hayward Fault. Normally, faults respond to the mechanical stress exerted on them through this plate motion by producing earthquakes. Each quake releases a little bit of the accumulated stress. This is not to say that many earthquakes of magnitude 3 - the strength of Wednesday's event - can compensate or even prevent a destructive quake of magnitude 7. The magnitude scale is logarithmic, which means that a magnitude 7 quake is 10000 times stronger than one of magnitude 3. But nevertheless, the small quakes show that the fault is not locked and that at least some stress is relieved.

However, the more important aspect has to do with psychology. Small earthquakes like today's remind people that the are living near an active fault line and that large earthquakes are inevitable. During long periods without small shakers, people tend to forget the hazard under which they live - and become complacent. In order to remind everybody, let us repeat what we have said in this blog many times: The Hayward Fault is the most dangerous earthqauke fault in the Bay Area. There is an almost 30 percent probability that an earthquake of magnitude 6.7 or stronger will occur on its northern section within the next thirty years. While a magnitude 3 event like yesterday's is a friendly, gentle reminder of the fault's activity, every quake above magnitude 6.7 can have devastating consequences for yourself, your residence and the infrastructure in the East Bay. The blogger can only appeal to use this little quake to get prepared. The web is full of ressources with information of how to prepare for an quake. Here are a few:
http://seismo.berkeley.edu/outreach/be_prepared.html
http://www.redcross.org/get-help/prepare-for-emergencies/types-of-emergencies/earthquake
https://www.fema.gov/earthquake-safety-home
Get ready now. (hra 142)