Previous studies have documented the presence of ultra-low-velocity-zones (ULVZs) at the base of the mantle, 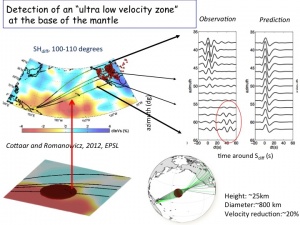 Add Caption
through observations of body wave complexities. Geometrically their heights are in the range of View the MathML source, while little is known about their lateral extent beyond about 102 km, due to limitations in sampling. Here we show remarkable features in the waveforms of S/Sdiff phases of western Pacific events observed at stations in North America that indicate the presence of a very large ultra-low-velocity-zone (ULVZ) at the base of the mantle, centered ∼11° to the southwest of Hawaii, within and near the northern border of the Pacific LLSVP. Waveform complexities include strongly delayed (View the MathML source) postcursors. Measurements of travel times, beamforming analysis of out-of-plane energy, and full waveform comparisons with 3D numerical simulations, constrain the location, lateral extent, height and velocity reduction of the ULVZ with some level of trade-off. The simplified 3D model consists of a cylindrical ULVZ with a large aspect ratio of View the MathML source in height and View the MathML source in diameter at the CMB. The shear wave velocity reduction is ∼20%. This is to our knowledge the largest ULVZ mapped to date and the first time the lateral extent of a ULVZ has been constrained with some precision. Its location suggests that it may be the root of a long-lived, stable plume responsible for the Hawaiian volcanic chain, the hotspot track with the largest buoyancy flux.

To, A., B. Romanowicz, Y. Capdeville and N. Takeuchi (2005) 3D effects of sharp boundaries at the borders of the African and Pacific Superplumes: observation and modeling, Earth and Planet. Sci. Lett.,233, 137-153.