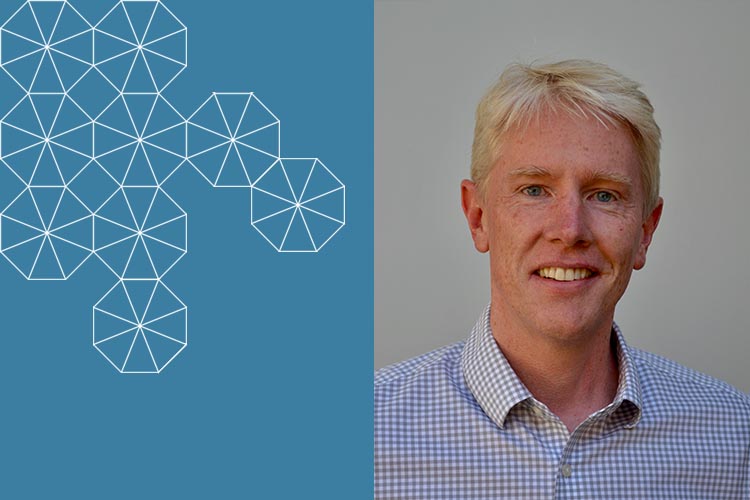 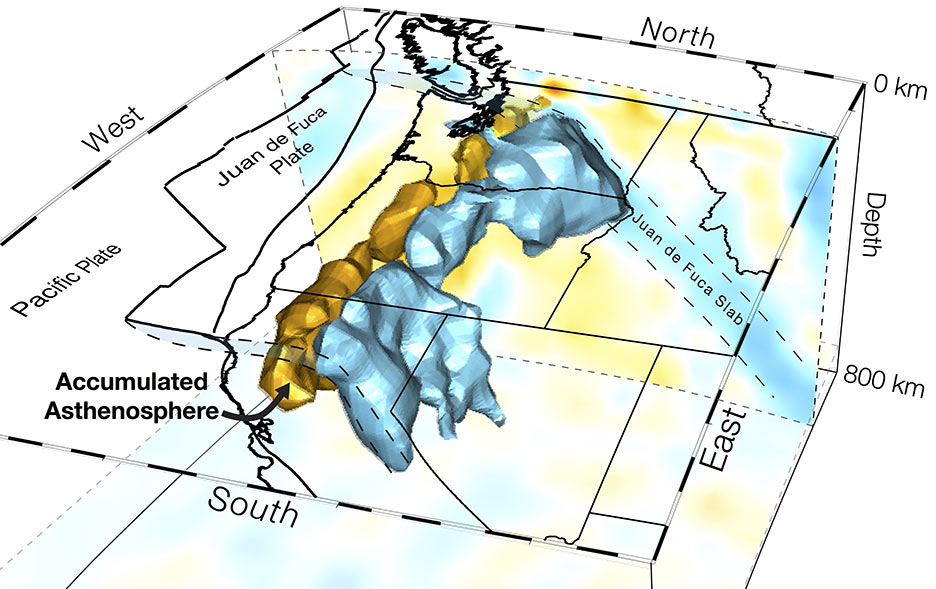 The enigmatic Cascadia Subduction Zone lacks the continuous seismic activity seen at most convergent plat boundaries. We use a variety of Earth imaging techniques to understand tectonic processes in the region. 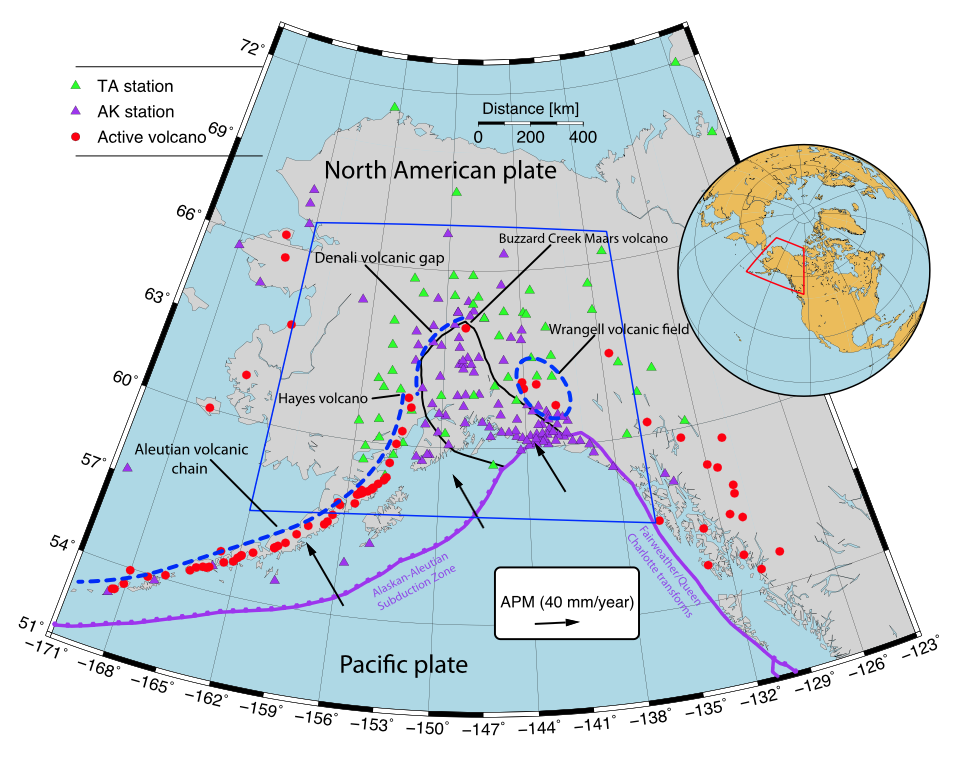 Alaska is the last frontier for Earthscope. As the dense USArray spreads across the state we start to observe the dynamic processes responsible for the region’s earthquakes and volcanoes. 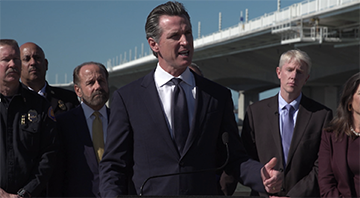 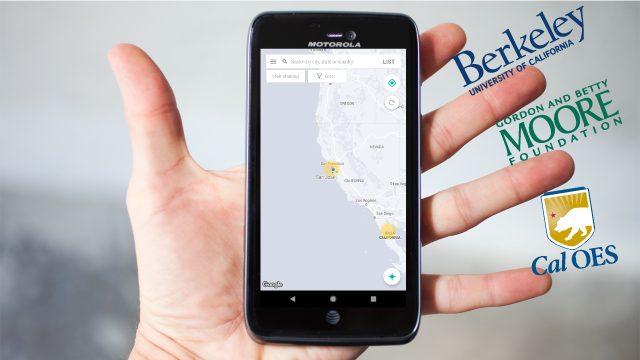 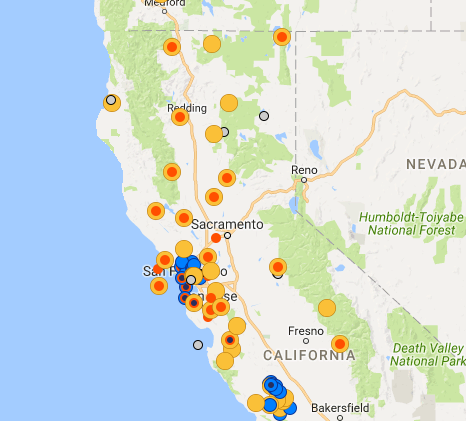 Data is at the heart of all our research activities, so we also work to design, develop and implement new geophysical observational systems, as part of the Berkeley Seismological Laboratory.

Opportunities for students and post-docs 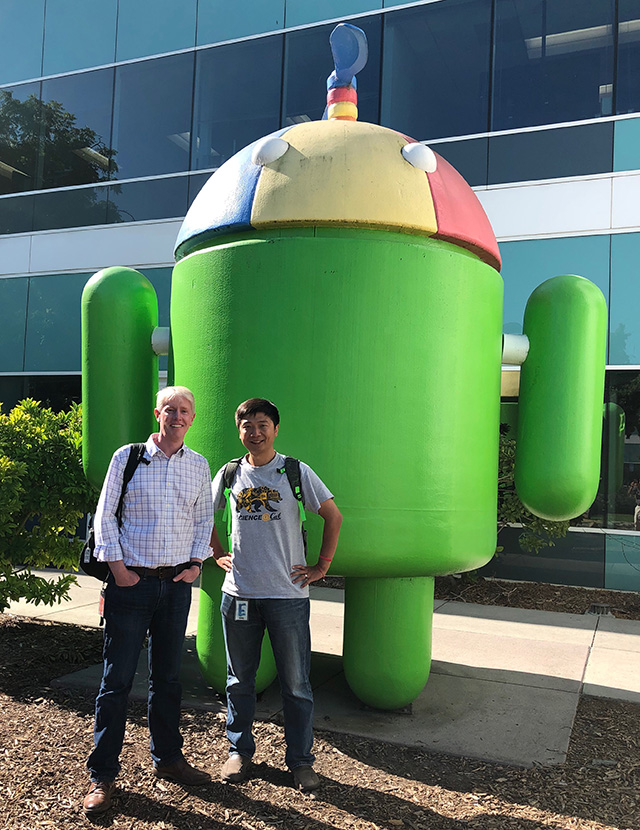 Richard Allen and Qingkai Kong at Google Android during their collaboration to build the Android Earthquake Alerts system. 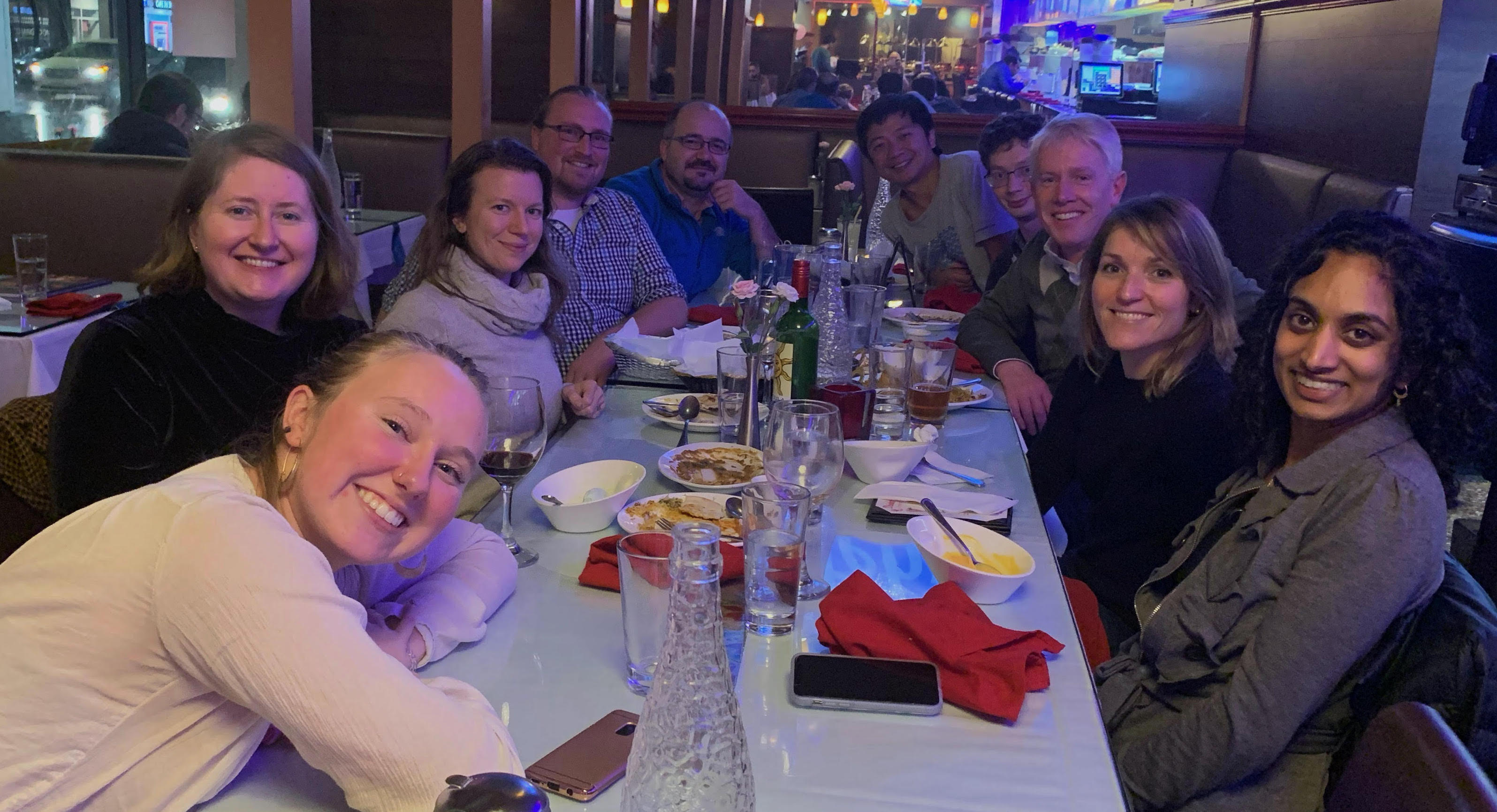 Governor Gavin Newsom announces the launch of the MyShake smartphone app to include the first delivery of public earthquake alerts across California. The event was at the foot of the old Bay Bridge which collapsed in the Loma Prieta earthquake exactly 30 years earlier. October 17, 2019. (Play Video) 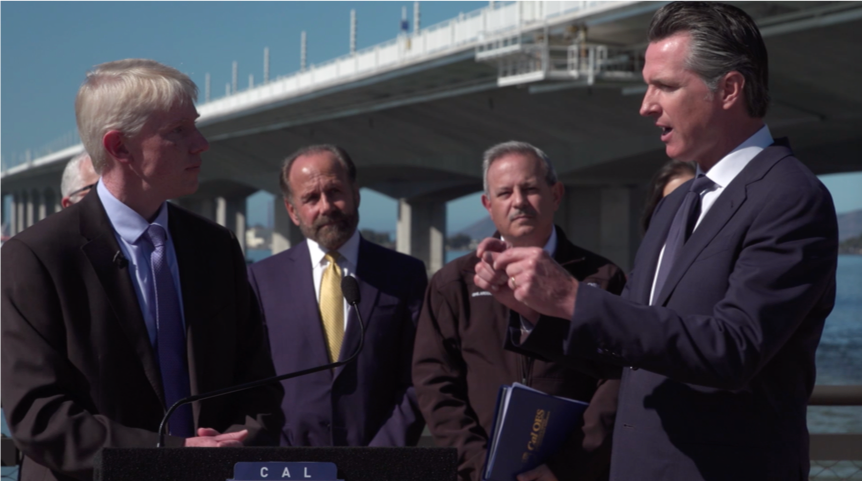 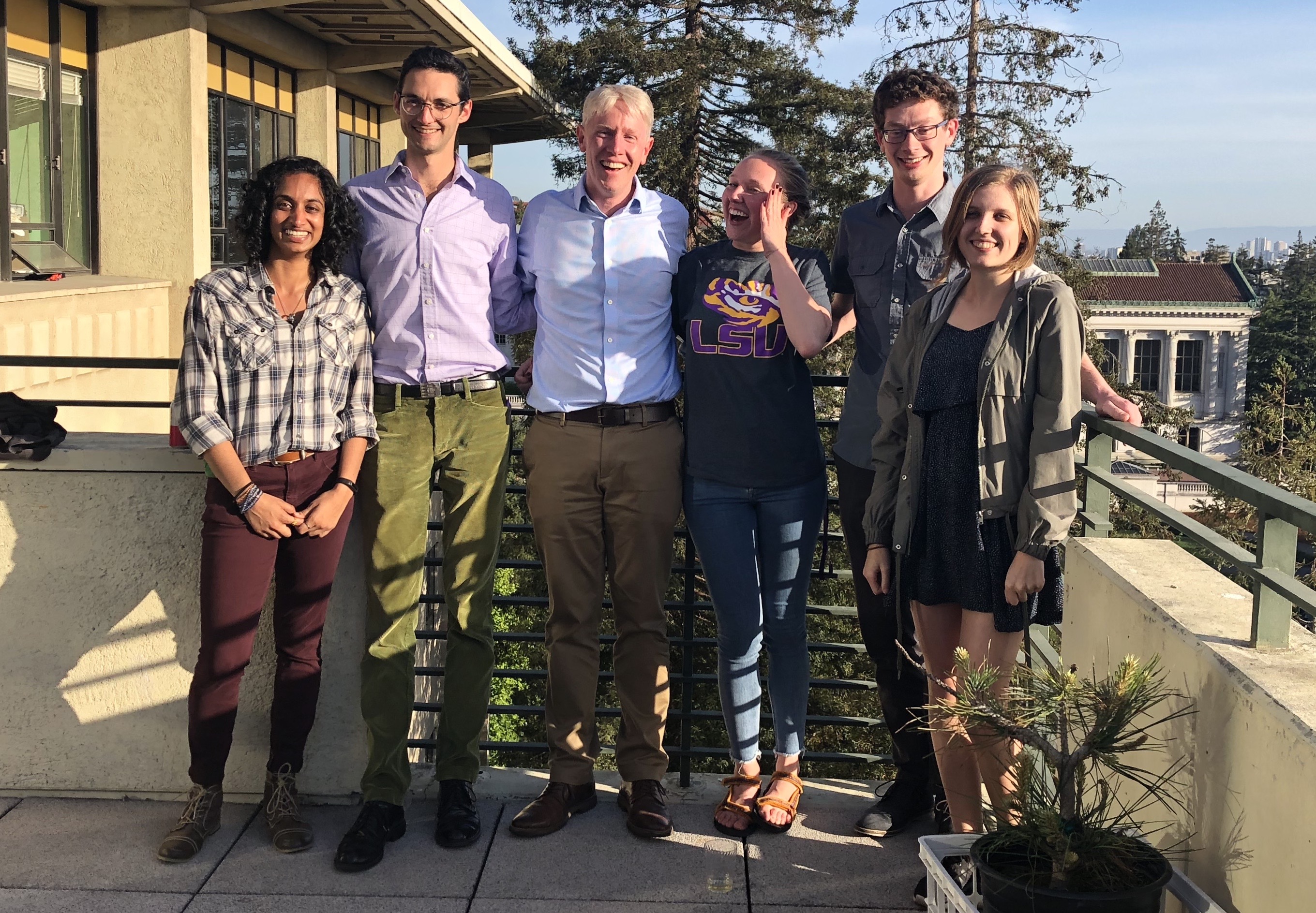 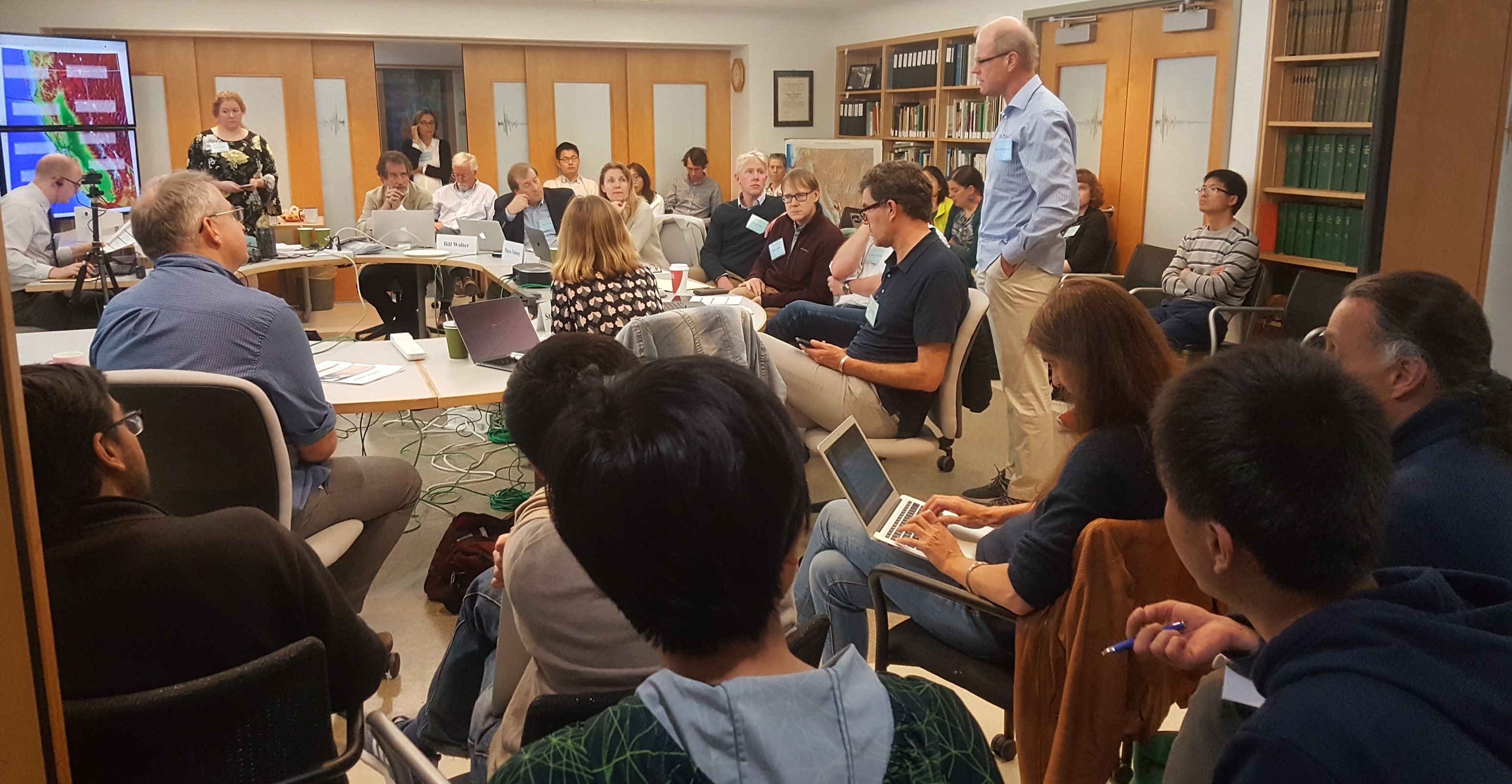 The National Academies Committee on Seismology and Geodynamics convenes at the Berkeley Seismology Lab to discuss "New Opportunities to Study Tectonic Precursors". May 2019. 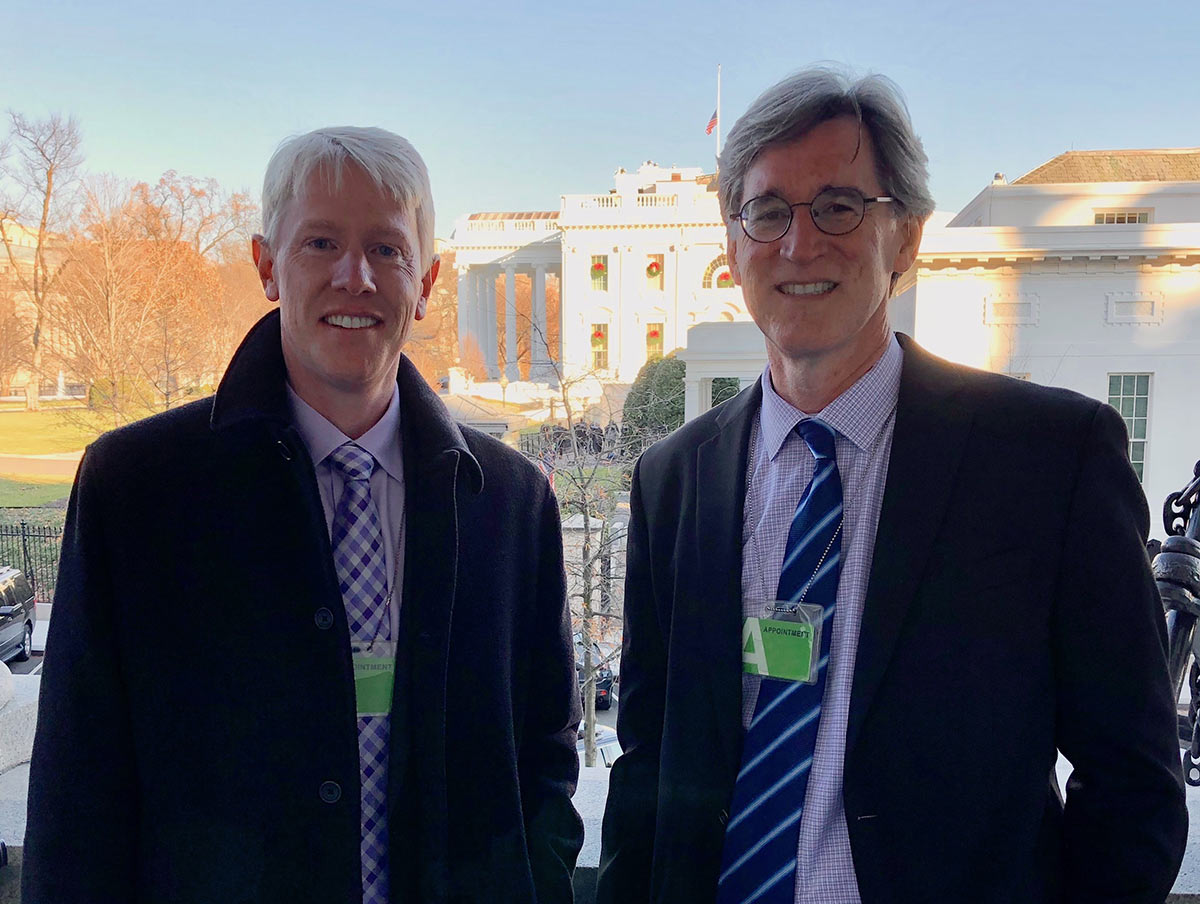 Richard Allen and Harold Tobin (University of Washington) at the White House following a briefing for staffers on the ShakeAlert earthquake early warning system. December 2018. William Hawley, a graduate student in the Allen group, giving an eLightning talk at the Fall AGU meeting in Washington DC, December 2018. 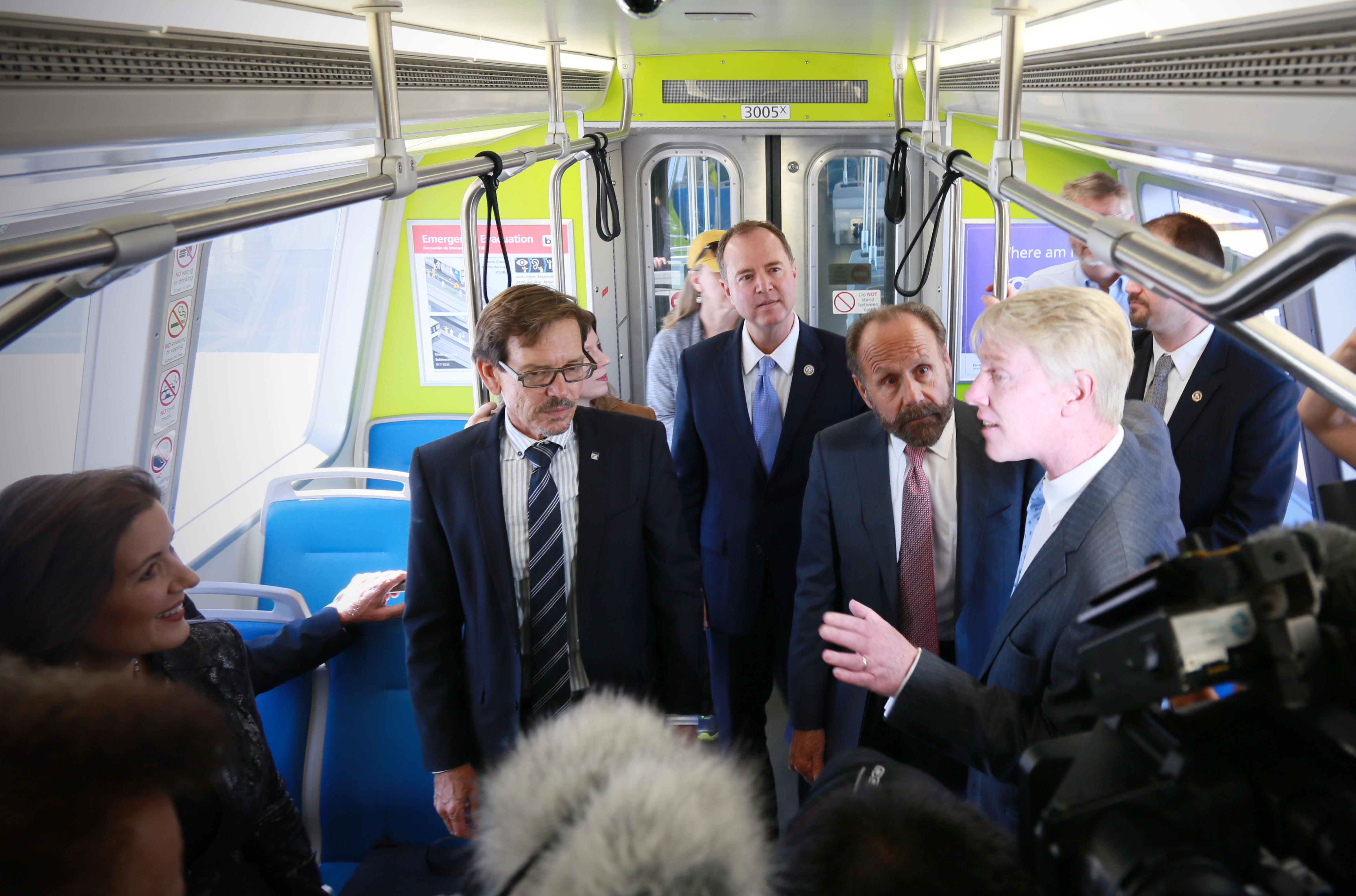 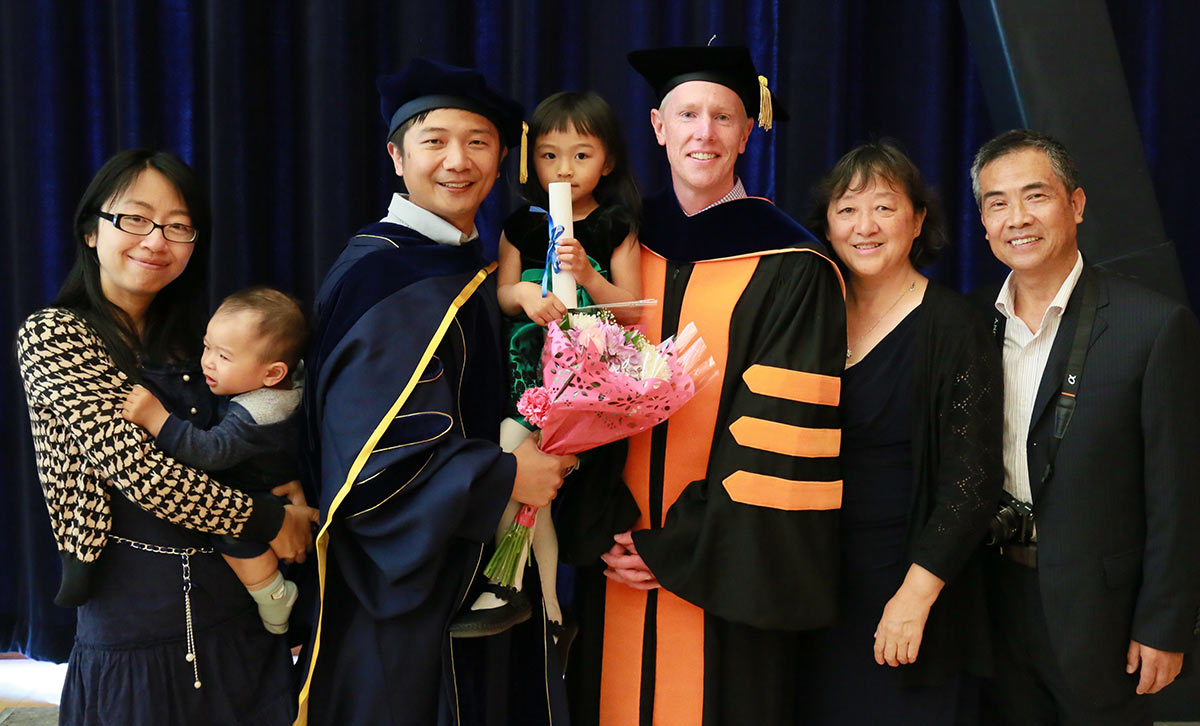 Dr. Qingkai Kong and his family at his PhD graduation ceremony. May 2018. 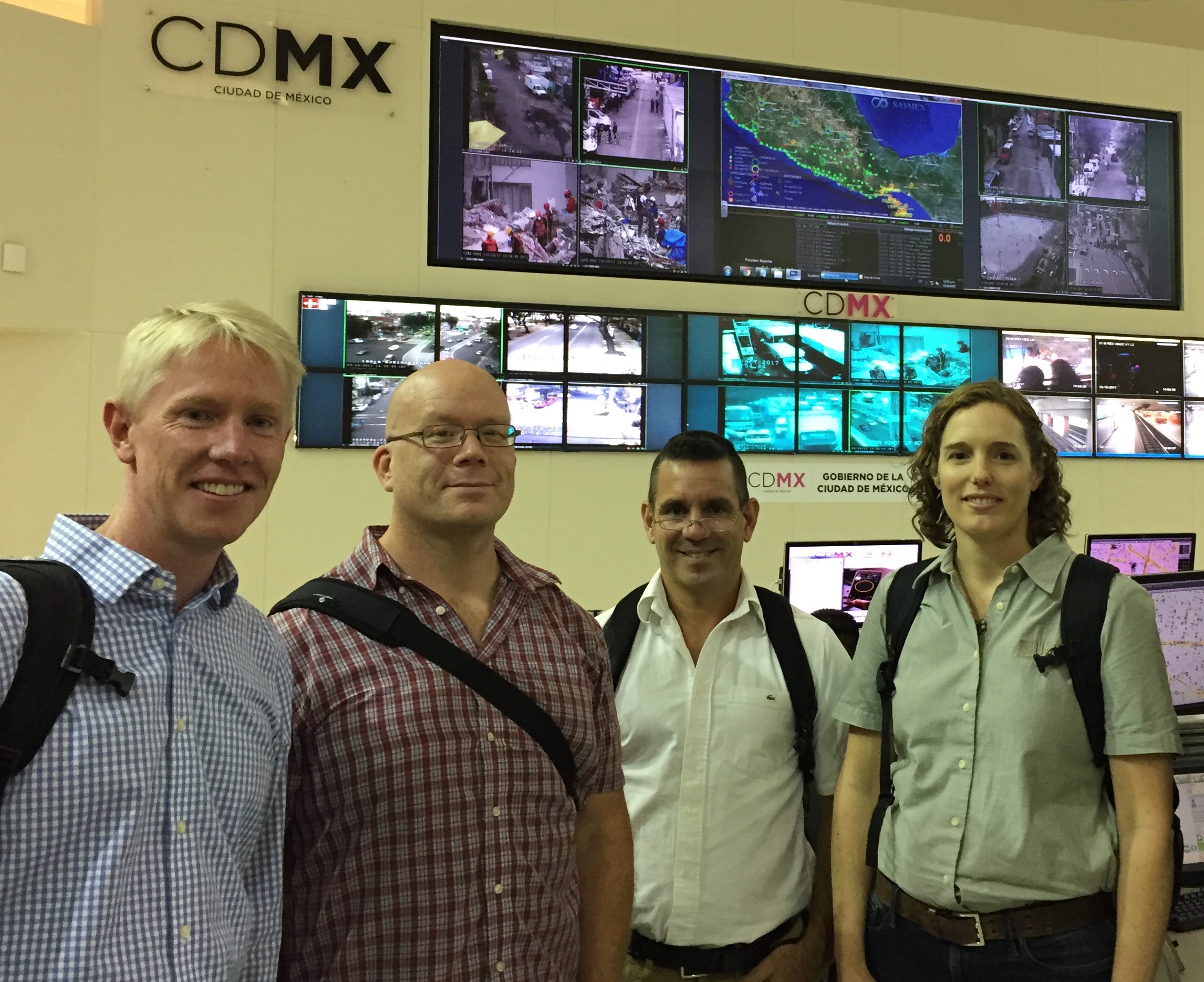 Richard meeting with Representative Adam Schiff of California in his D.C. office to update him on the progress of earthquake early warning in the US. April 2017. Richard gives a talk at CalDay on "Fueling Innovations in Earthquake Preparedness” in April 2017. What will you change #inthisgen? Diego Melgar, formerly a postdoctoral fellow in the group and now a researcher, received the Charles Richter Early Career Award from the Seismological Society of America in April, 2017. MyShake lights up the world! Map of the locations of all the phones that have installed MyShake in the first year - Happy 1st Birthday MyShake. February 2017.

Graduate student William Hawley publishes his 3D image of the Cascadia subduction zone in Science. In it he reveals an accumulation of low velocity material beneath the hinge of the subduction zone that is interpreted as accumulated low viscosity material separating the oceanic lithosphere from the mantle below. September 2016.

Demonstration video to illustrate how earthquake early warning would work in the US. This video was prepared and first shown at the White House Earthquake Resiliency summit in February 2016. 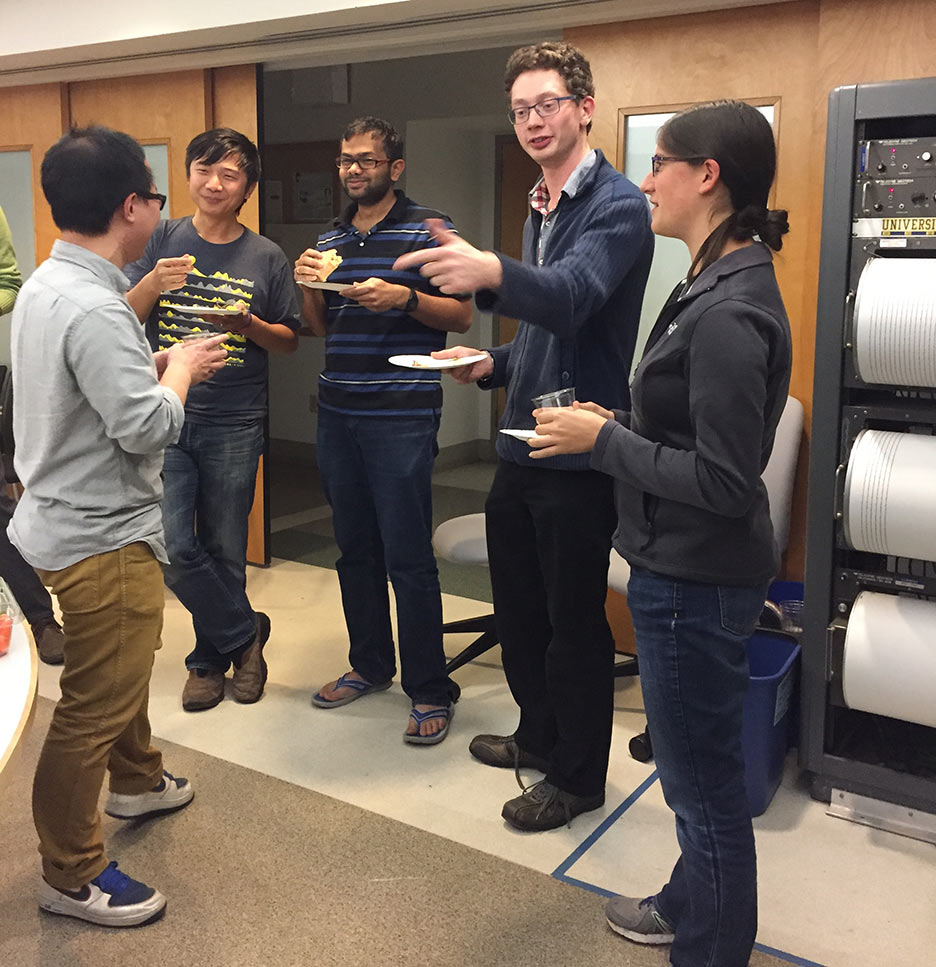 Richard with John Holdren, President Obama’s Science Advisor, chatting before the Earthquake Resiliency summit at the White House in February 2016. 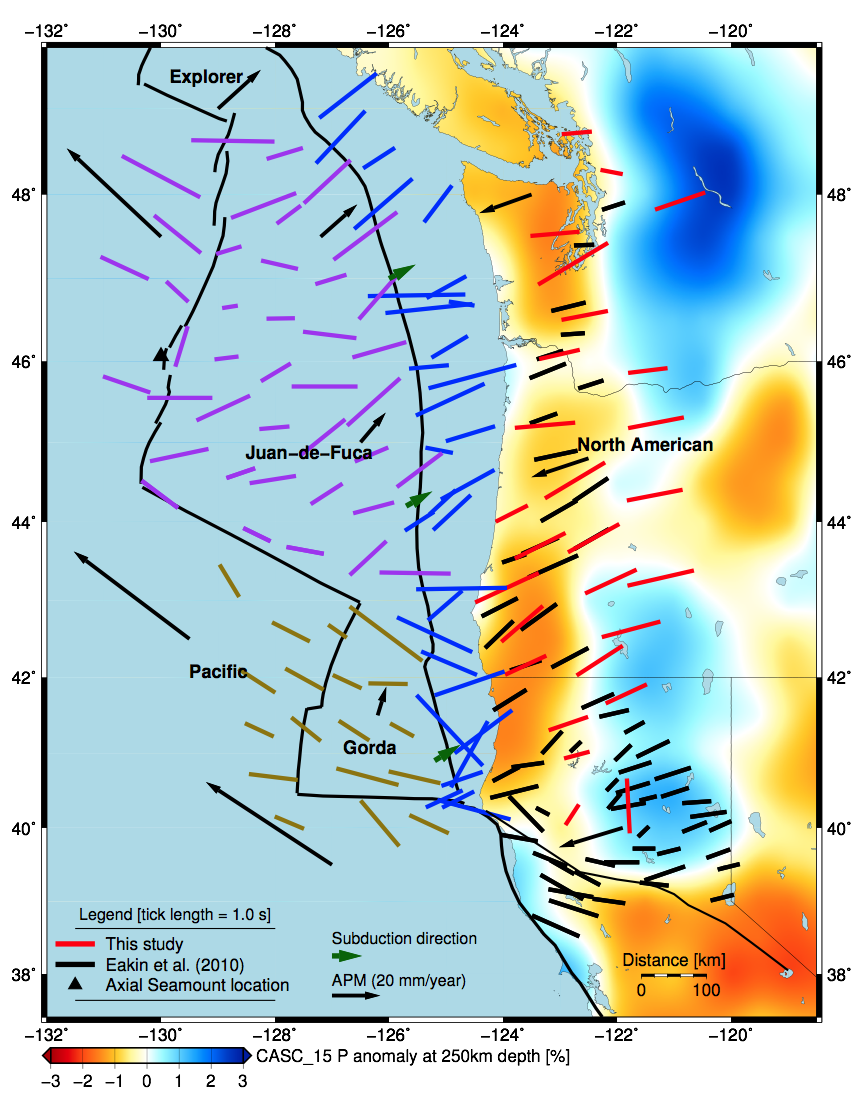 The Science Team on the R/V Thompson during one of the Cascadia Initiative cruises to recover seismic stations from the sea floor. Richard was co-chief scientist along with Maya Tolstoy from Columbia. Graduate students Robert Martin-Short and William Hawley were also on the team.

Tom Cruise Blog - 11 days at sea from a student perspective. Watch the daily video blog that the students on board the R/V Thompson made. Full Playlist