The Hayward Fault underlies some of the most densely populated places in the Bay Area as it runs for approximately 50 miles along the foothills of the East Bay. It is crossed by five major freeways and several water tunnels; BART and other rail lines also intersect it at several locations. The fault is sandwiched between the San Andreas and the Calaveras Faults. It splits off from the Calaveras Fault near Arroyo Agua Caliente Park in the Warm Springs District of Fremont and follows a straight northwesterly line through Hayward, Oakland, and Berkeley to Point Pinole in Richmond, where it disappears under San Pablo Bay. 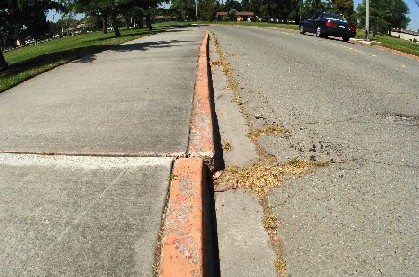 In contrast to its sister faults, the two flanks of some sections of the Hayward Fault creep past each other in an imperceptible movement of thousandths of an inch per day. Such ultra-slow creep is an earthquake in extreme slow motion which, over months and years, causes cracks in the pavement makes curbs and water lines bend, and results in cracked foundations and offset fence lines. 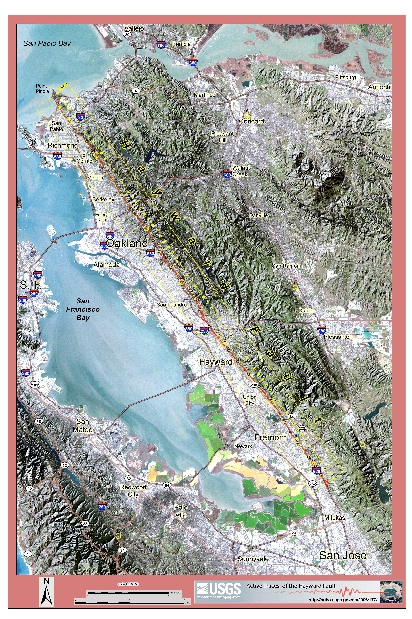 For the uninitiated, it takes a little training to find the subtle marks with which the creeping fault expresses itself in the urban jungle of the East Bay. Downtown Hayward, less than half a block east of Mission Boulevard, is full of such signs. The curbs of nearly every cross street are offset by a few inches; parking lots and roads are full of characteristic cracks, which align themselves along the fault in a staggered fashion. To the north, on the campus of Contra Costa College in San Pablo, the fault is also visible through pavement cracks and offset curbs. There, a patio area next to Campus Circle bears an especially interesting mark of the fault's creep. Its bricks, originally laid in a straight and rectangular design, have been moved by the fault and now show a clear curvy pattern. While most of the fault line is covered by urban infrastructure, it also cuts through the Oakland Zoo, where it runs past the otter tank and a bear pen.

Our campus straddles the fault as well. Some of the residence halls near the Greek Theater and the Memorial Stadium at the foot of Strawberry Canyon are built either directly on or just a few yards off the surface trace of the fault. The effects of fault creep in the stadium are clearly visible in the concrete wall above section KK in the south curve, where some sections of the wall have separated from each other by at least four inches.