An Explosion in Beirut heard all over the Middle East

The terrible explosion which devastated the port of Beirut and large parts of the downtown area of the Lebanese capital on Tuesday sent shock waves through the Middle East and parts of southeastern Europe. Seismometers as far away as 600 miles from the blast site recorded the seismic waves it produced. Analyzing these waves, researchers at the European-Mediterranean Seismological Center in France calculated that the explosion had a magnitude equivalent to a 3.4 earthquake. The director of the Jordan Seismological Observatory in Amman, Mahmoud Qaryouti, even calculated a magnitude of 4.5.

While the cause of the gigantic blast, in which more than a hundred people were killed, has still not been determined in detail, it is clear that on Tuesday about 2750 metric tons (equivalent to more than 6 million pounds) of ammonium nitrate blew up. This chemical has a sinister double role: It can be used a life giving fertilizer in agriculture – or as a killer explosive. This large batch of ammonium nitrate arrived at the Lebanese capital in 2013, when the Russian freighter MV Rhosus was abandoned there by its owner. In 2014, the Lebanese authorities impounded the cargo, originally destined for Mozambique, and stored it in a warehouse in the harbor area. It has sat there ever since, without regard for its devastating potential.

Most countries, including the US, have very strict regulations on how to handle and store ammonium nitrate. The reason: While it is normally delivered as a solid granulate, under certain conditions the chemical can spontaneously transition into a gas, particularly when it is ignited by a small fire. Within a fraction of a second the granulate then dissolves into its original compounds of nitrogen, oxygen and water, and at the same time expands explosively with an enormous force. One pound of solid ammonium nitrate then suddenly fills a gas volume of more than 125 gallons, leading to a major blast wave. 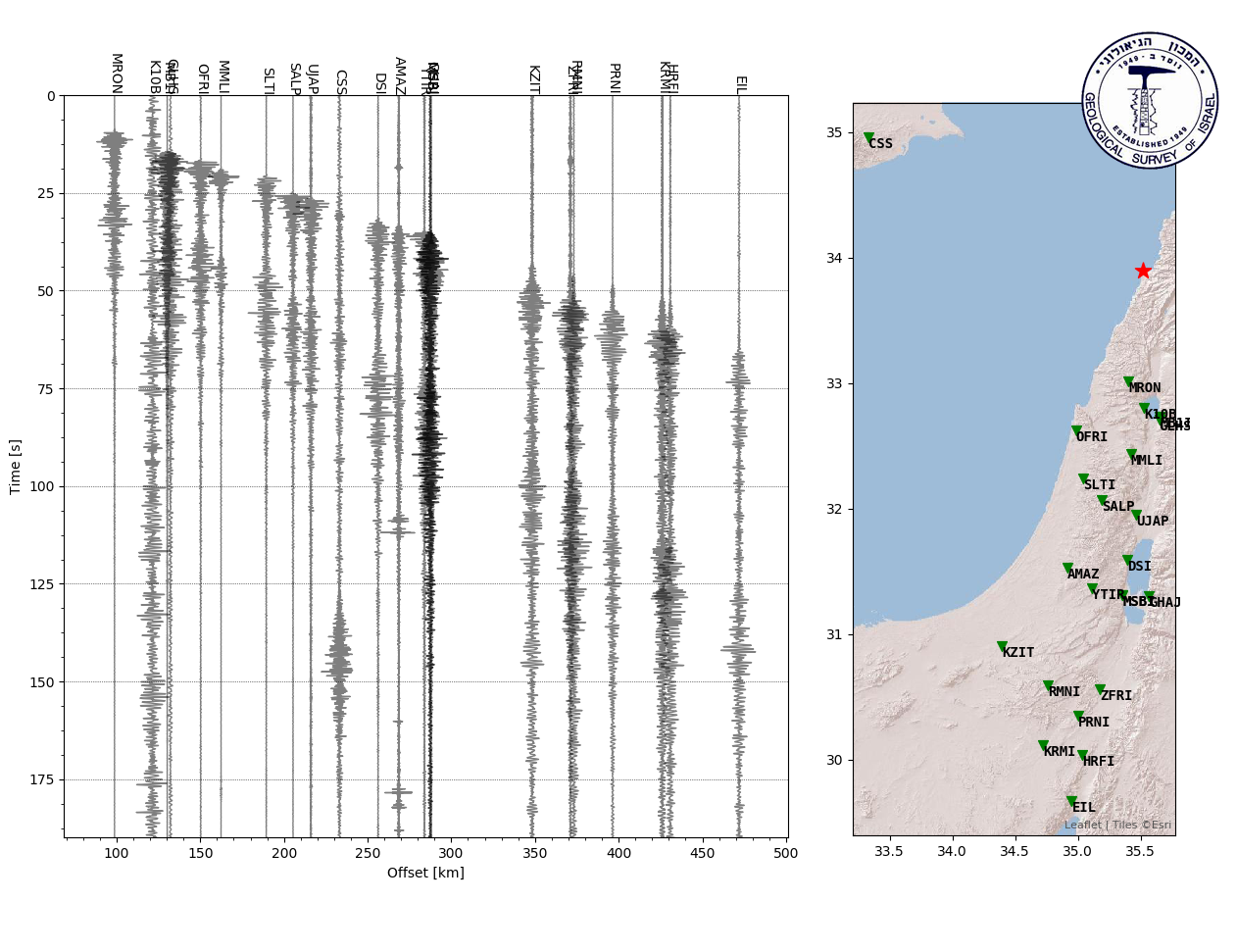 Figure 1: This seismogram section provided by the Geological Survey of Israel shows about three minutes of recordings of Tuesday's blast at more than 20 seismic stations in Israel and one on the Mediterranean island of Cyprus. The recordings are sorted by distance from the blast center, starting with the station in Meron just North of the Sea of Galilee (left vertical trace). It is located about 75 miles from Beirut. The right most trace is the recording at the station in Eilat at the Red Sea at a distance of almost 300 miles. The inset on the right shows the map of the seismic stations (green triangles) with respect to the location of the blast in Beirut (red star).
Source: Nadav Wetzler, Geological Survey of Israel (Click to view larger)

When such a blast hits the ground, it generates elastic waves that behave in exactly the same way as those generated by natural processes, for instance during tectonic or volcanic earthquakes. Like all seismic waves, the vibrations from a blast travel through the earth and cause shaking at distant locations, where they can be measured by seismometers. Seismic instruments as far away as Athens (Greece), eastern Turkey, and Eilat at the northern end of the Red Sea, detected the waves of Tuesday's explosion.

It is nothing new that seismometers pick up the signals from both large and small explosions. In some regions of California, the blasts in quarries are recorded as well as small local earthquakes. And when on August 12, 2015, the Chinese port of Tianjin was rocked by an ammonium nitrate explosion almost as powerful as the recent one in Beirut, sensors in the Chinese Seismic network recorded the blast very clearly. In fact, for decades a major branch of earthquake science targeted the investigation of waves generated by explosions. The important questions seismologists asked were how well such waves can be detected and how to distinguish them from waves caused by natural sources. This research, starting in the early sixties of the last century, was fueled by the nuclear arms race between the United States and the Soviet Union. In order to verify the design and the performance of a nuclear weapon, the war heads have to be tested. Since 1945 more than 2100 such nuclear tests were performed by eight nations (US, UK, Soviet Union, France, China, India, Pakistan and North Korea). Most of these nuclear detonations occurred in boreholes or mines underground.

Each of these tests generated a seismic signature, which researchers have learned to analyze and interpret. The results lead to a better understanding of the kinds of weapons the nuclear adversaries were developing. For the past 22 years, however, most nations have stopped their nuclear testing, in part a result of the Comprehensive Test Ban Treaty, signed by President Clinton in 1996.

The only country still performing tests is North Korea and we have talked about its nuclear bombs in several blog posts. Scientists at the National Earthquake Information Center, operated by the US Geological Survey in Golden, CO, calculated the magnitude of the most recent North Korean nuclear test in 2017 as 6.3. As the magnitude scale is logarithmic, it was at least a hundred, if not a thousand times more powerful than the explosion in Beirut. (hra173)