When North Korea detonated a nuclear device on Saturday night (California time) in its sixth underground nuclear test in more than a decade, one thing became very clear very quickly. This was the most energetic bomb which the Democratic People's Republic of Korea, North Korea’s official name, had ever test fired. How can the blogger be so confident in his claim? There is clear seismological evidence that this weekend's bomb was much more powerful than all its predecessors - possibly by a factor of ten or even more. 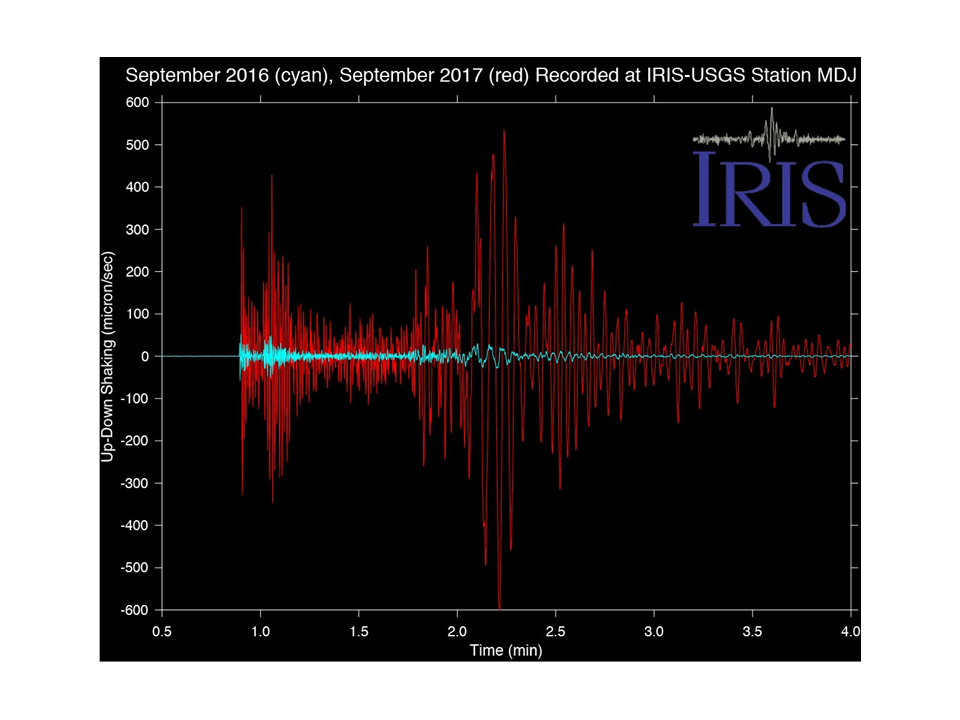 Although we have commented on North Korea's various nuclear tests several times in this blog, it is helpful to explain again why there is a link between nukes and seismology. In each earthquake, be it of tectonic or volcanic origin, a section of the ground suddenly breaks with great force. In such ruptures, blocks of rock, sometimes weighing millions and millions of tons, move by several feet within fractions of a second. To the rest of the solid Earth this sudden, extremely forceful movement is physically the same as a clapper hitting a church bell. As in the case of the bell, the impact of the sudden movement lets the Earth ring and vibrate. While a ringing bell emanates sound waves, the Earth sends out seismic waves which can be recorded by sensitive ground motion sensors called seismometers.

The underground detonation of a nuclear device has the same effect. Its explosive force also makes the Earth ring like a bell and as a consequence, seismic waves propagate in the same fashion as if they were generated by an earthquake. Hence, they are also picked up by the ground motion sensors. Seismologists can then use the same tools they have developed for studying earthquakes to analyze the seismogram generated by an underground nuclear test.

Therefore, the first indication of a nuke's power is the corresponding magnitude calculated from the amplitude of its seismic waves. For this process, the researchers use the same mathematical algorithms which usually help to determine the strength of an earthquake. Scientists at the National Earthquake Information Center, operated by the US Geological Survey in Golden, CO, calculated the magnitude of Saturday's nuclear test as 6.3. In contrast, the last known underground test by North Korea, almost exactly a year ago on September 9, 2016, had a magnitude of 5.3 using the same algorithms. As the magnitude scale is logarithmic, an increase by one unit means that the maximum amplitude of the seismic waves is ten times larger.

The difference between these two nuclear detonations is shown in the two seismograms in Figure 1. Both were recorded by a Chinese seismic station located near the border with North Korea. The blue record represents last year's test, the red line is the recording of Saturday's nuclear detonation. They are plotted on the same scale and it is obvious that the amplitudes in the red recording are much larger than those in the blue seismogram. This figure was put together by seismologists at IRIS, a consortium of over 120 universities in the US dedicated to gathering seismological data and making it available. 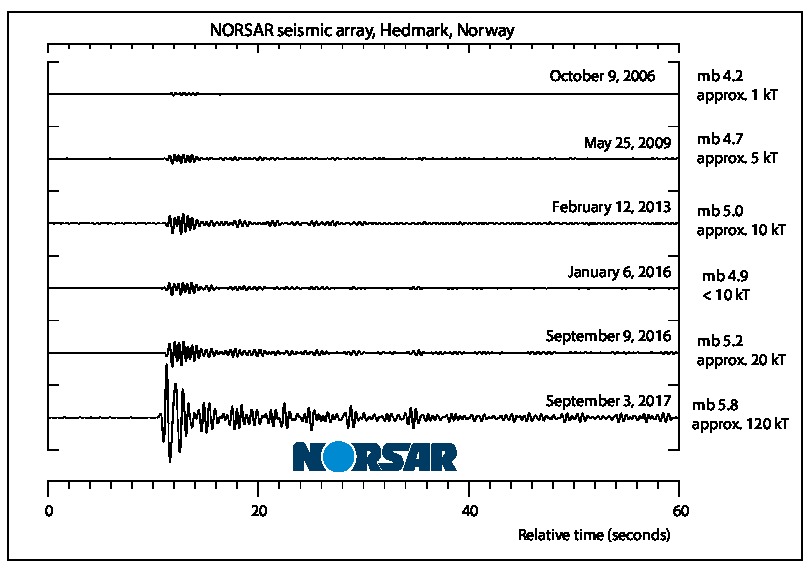 An impressive comparison of how the strength of North Korean nuclear devices has increased over the years was put together by seismologists in Norway. They operate a network of seismic stations, which was originally installed decades ago by the US military to monitor Soviet nuclear tests in the Arctic. Since this Norwegian Seismic Array (Norsar) was handed over to Scandinavian scientists, it has been modernized and is now one of the premier seismic research institutions in Europe. Figure 2 shows a comparison of recordings of all six North Korean nuclear tests since 2006 - and again Saturday's detonation stands out by its large amplitude.

Berkeley's own Doug Dreger used a different method to determine the strength of the most recent explosion. By analyzing the recordings of almost 40 seismic stations he calculated the "seismic moment" of the explosion. In the analysis of earthquakes, the resulting value gives the mechanical energy which is released by a tremor. Applied to nuclear explosions, Dreger inferred the yield - meaning the explosive strength - of the detonation. According to his calculations, Saturday's North Korean nuclear device contained as much explosive power as almost 300,000 tons of conventional chemical explosives. This is about 20 times more powerful than the atomic bombs dropped over Hiroshima and Nagasaki at the end of WWII - and it supports North Korea's claim, that Saturday's device was a powerful Hydrogen- or thermonuclear - bomb. (hra144).