In the middle of the 18th century, Lisbon was one of the five largest cities in Europe. As a harbor town, Portugal's capital was an important hub in the trade between the Old World and its colonies. The 275,000 inhabitants of this proud and extremely wealthy city were devoutly Catholic. No wonder, that all of the 40 cathedrals and churches in town were filled to the brim on All Saints Day 1755 - 253 years ago today. During mass, exactly at 9:40am, the city was suddenly violently shaken by seismic waves generated during the biggest earthquake the European continent has seen in historic times. Thirty churches, many palaces and countless houses collapsed. Those people who were not killed outright or trapped in the rubble, ran down to the quays along the Tejo River - only to be swept away by one of the largest tsunamis ever generated in the Atlantic Ocean. Its 20 foot waves destroyed everything in the lower part of the city; fires consumed what was left standing on the hillsides. The casualties of this quake and its aftermaths were never counted, but at least 60,000 people lost their lives. Today we know that this quake had a magnitude of almost 9, stronger than any temblor California has experienced since Spanish settlers arrived here.

Lisbon seen from the east during the earthquake. Exaggerated fires and damage effects. People fleeing in the foreground. (Copper engraving, Netherlands, 1756) - Image and caption courtesey of the National Information Service for Earthquake Engineering image library

Given the strong religious beliefs of the population, it was easy for the survivors to assume God had struck the city with his wrath. Why else would a devastating earthquake occur exactly during mass time on All Saints Day? Only one explanation fit the moral compass of the time: God punished Lisbon for the sinful and immoral lifestyle of its inhabitants. That was indeed the way all natural disasters were explained two and a half centuries ago. 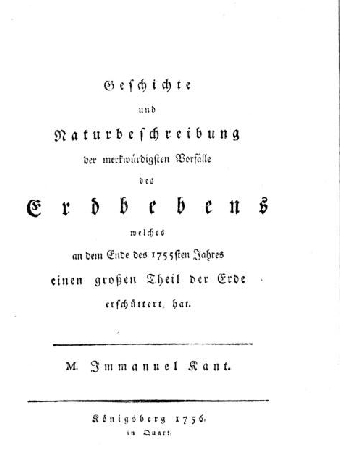 But the Lisbon quake was about to change that fundamentally. Voltaire, one of the most brilliant figures of the European Period of Enlightenment, was shocked by so much devastation. He wrote a poem "Poème sur le désastre de Lisbonne," in which he argued that forces other than God must have been responsible for such a disaster. Within a year, Germany's foremost philosopher, Immanuel Kant, had collected all available accounts of the quake and its effects and published them, together with his comments and conclusions. In his comprehensive report, written in German, he concluded that the source of the earthquake lay in cracks and caverns in the Atlantic Ocean. This impressive scientific compendium (small picture) is considered by many the beginning of the systematic observation of natural phenomena and the start of modern seismological research. Kant was truly the first Seismo Blogger. (hra014)