Tragedy in the Heart Of Italy

The earthquake which struck the Abruzzo region of Central Italy last night (local time) was the worst temblor to hit this Mediterranean country in almost 30 years. According to news reports, more than 90 people were killed and in the medieval town of L'Aquila alone, up to 10,000 buildings were damaged. The same region about 70 miles northeast of Rome was hit on January 13, 1915, when a magnitude 7.0 quake leveled the town of Avezzano, killing at least 33,000 people. Scientists at the office of the USGS in Golden, CO, calculated the magnitude of the latest quake at 6.3, while Italy's National Institute of Geophysics and Volcanology (INGV) put it at 5.8. 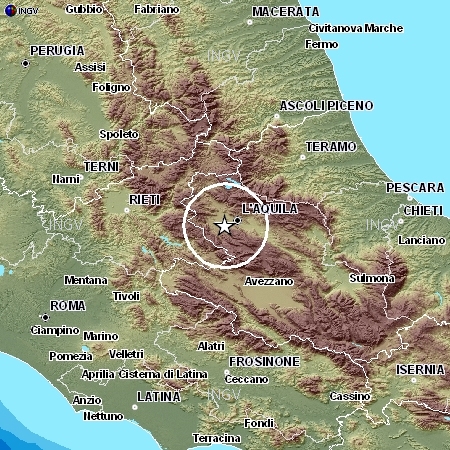 Beside Greece and Romania, Italy has the highest earthquake risk in Europe. During the last 100 years alone, more than 120,000 people have died in the rubble of buildings destroyed by quakes. The cause for this volatility is the slow drift of the African continent towards the North. The whole Mediterranean region is the collision zone between Africa and Europe. In California, we also live in a contact zone between two plates. Here the plate boundary between the Pacific and the North American Plates is limited to a relatively narrow zone defined by the San Andreas Fault and its associated faults like the Hayward and the Calaveras. Along these faults, the two plates slide past each other, the Pacific Plate moving towards the Northwest at a rate of about 2 inches per year. 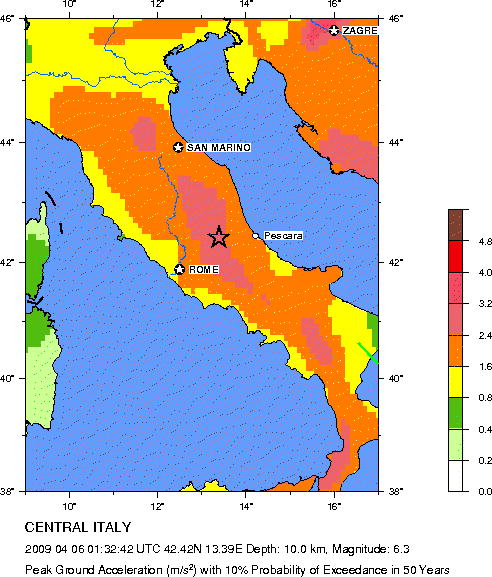 This map shows the seismic hazard in Italy. The Abruzzo region (star) is one of the most vulnerable in the country (Map courtesy of Global Seismic Hazard Assessment Program)

In Italy, however, the movement of the plates is a frontal collision. In a stringent geological sense, Italy's boot is part of the African Plate, ramming into Europe like a nail being hammered into a board. The most obvious consequence of this movement is the folding of the Alps, the highest mountain range in Europe. But this collision also leads to a movement in the shaft of Italy's boot. The Apennine mountains, which are the core of the shaft, are fractured by several major earthquake faults. One of them is the fault west of the Gran Sasso mountains, which was activated in 1915 and then again last night. The strongest quake to have hit Italy in modern times struck on December 28, 1908 at the toe of the boot. The epicenter of the magnitude 7.5 temblor was in the Strait of Messina, a narrow waterway separating the Italian mainland from the island of Sicily. At least 86,000 people were killed by this major temblor. (hra036)