Last Saturday's magnitude 5.6 earthquake in Oklahoma not only shook the Boone Pickens Stadium at Oklahoma State, where the home team, the Cowboys, had just beaten the Kansas State Wildcats 52 to 45. This largest quake in the Sooner State's history shook a huge area. Almost 60,000 people tuned into the "Did you feel it?" website from the US Geological Survey and reported how they felt the shaking. Computers automatically plotted each of these reports on a map, where the color depicts the intensity of the shaking felt by the person reporting. Blue represents a very light rumble, yellow stands for strong shaking and dark red and brown means that you would be lucky to survive. 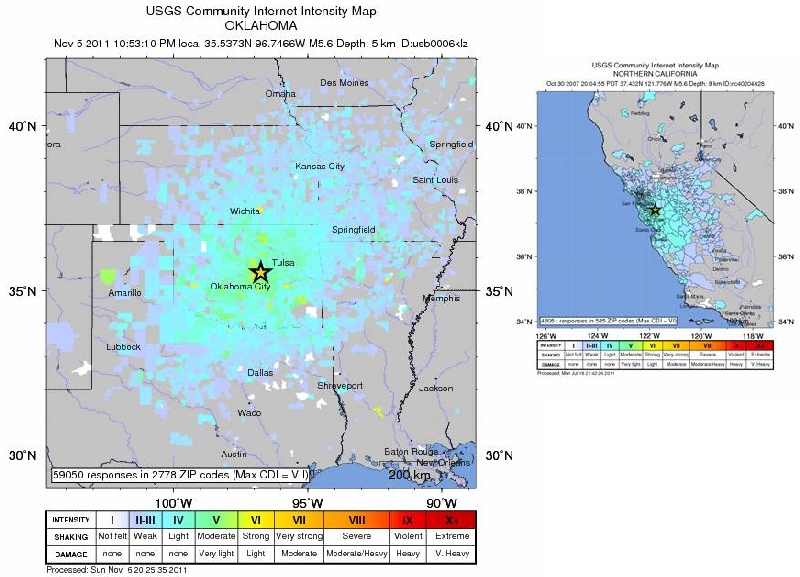 Drawn on the same scale, the left panel shows the shake area of last Saturday's Oklahoma quake. It is almost six times as large as the area where shaking was felt from the Alum Rock earthquake, which occurred in 2007 near San Jose (right panel). Both quakes have very similar magnitudes. (Source: "Did you feel it?") (Click to view larger image.)

The map of responses for the Oklahoma shaker covers an enormous area, ranging west to east from the Texas panhandle to Memphis, Tennessee, and north to south from Omaha, Nebraska, and Des Moines, Iowa, to Austin, Texas (see left panel in our figure). In total, the M 5.6 earthquake was felt in an area of more than 300,000 square miles, roughly three times the size of California.

Now compare that with the shake area of the largest Northern California Earthquake in the last 22 years, the October 31, 2007, temblor on the Calaveras Fault near Alum Rock northeast of San Jose. With a magnitude of 5.4, this quake was just a little smaller than Oklahoma's quake. Although it was felt as far away as Redding in the north, Carson City, Nevada, in the east and Bakersfield in the southeast, the area of more intensely felt shaking was concentrated around the greater Bay Area (see right panel in our figure). The region where shaking was felt consistently covers only about 50,000 square miles. Even if you double that number because California is a coastal state and the shaking cannot be felt on water, the shake area of the Alum Rock quake is only about a third of shake region of the Oklahoma quake - even though the two quakes were comparable in magnitude.

What causes this discrepancy? The answer is that the tectonic regime in the contiguous United States east of the Rocky Mountains differs substantially from the situation west of the mountain range. The Earth's crust here in the West is torn and jumbled by the tectonic collision of the Pacific and the North American plates. The boundary is not confined only to the San Andreas Fault, but influences the entire region from the Pacific Coast all the way to the Rockies. East of the range, however, most of the Earth's crust is old and geologically very stable. It has not seen any plate collisions for hundreds of millions of years. Seismic waves can travel through such stable regions with much less interference than in areas that have recently been torn up by tectonic forces. When an earthquake hits east the Rockies, the Midwest and East ring like a bell, to be "heard" for hundreds of miles. Here in California and the West, however, the seismic waves are more like a "thud." They are scattered, absorbed, and attenuated by the battered crust, thereby losing their punch in a much shorter distance. (hra067)