A Nuke, Not a Quake 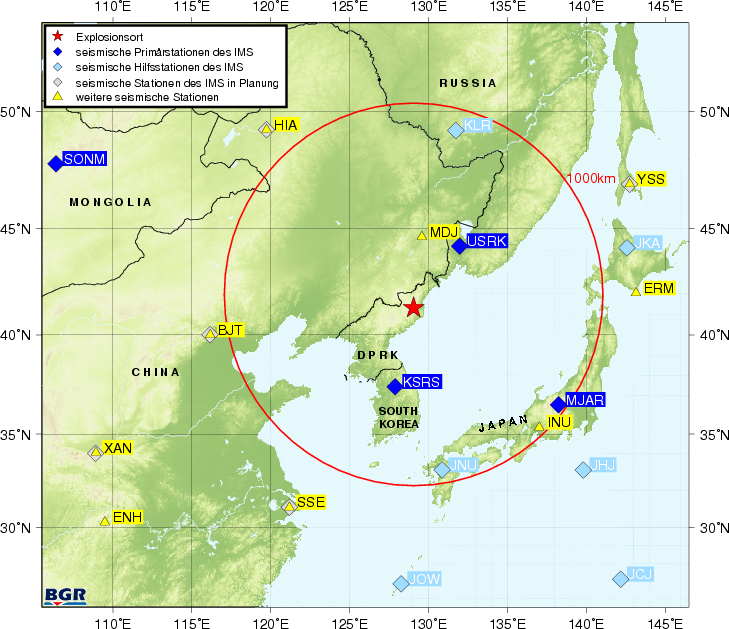 North Korea's nuclear test site Punggye Ri is shown as a red star in this map of East Asia. The seismograms in the other figure were recorded at seismic station MDJ in China, shown as a yellow marker north of the test site. Source: BGR, Germany 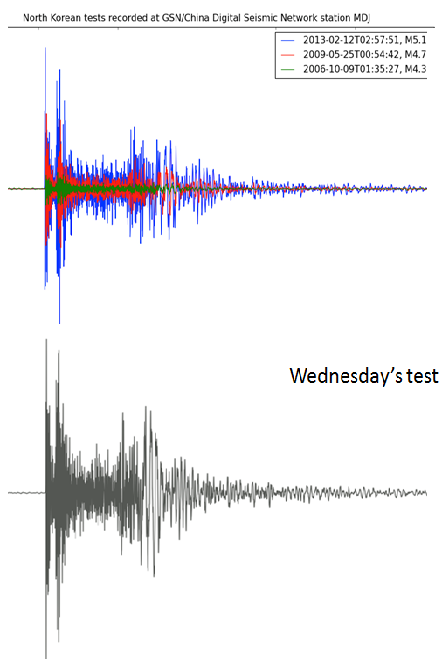 They look almost identical: The three previous tests are shown in different colors in the top panel, Wednesday's test is shown in black in the lower panel.

The second significant seismic event of the still very young year 2016 was not an earthquake at all. The first event last Sunday (Pacific time), a tectonic earthquake with a magnitude of 6.7, caused major damage in the far northeastern corner of India near the border with Burma. Several hundred people were either killed or injured. The next event, on Wednesday, had a much lower magnitude and did not cause any direct harm, but it was politically far more significant: The Democratic Peoples Republic of Korea, commonly known as North Korea, detonated its fourth nuclear weapon since the beginning of its atomic weapons test program in 2006. Seismometers all over the globe registered the seismic waves from this underground explosion. Politicians of all major countries, even North Korea's allies in China, expressed outrage. In the meantime, the propaganda machine in North Korea's capital Pyongyang jubilated, that for this latest weapons test, the country successfully detonated its first hydrogen bomb.

North Korea is currently the only country in the world which conducts nuclear weapons tests. Its test site Punggye Ri in the province of North Hamgyong is located about 235 miles northeast of Pyongyang and about the same distance to the southwest from the Russian Pacific port city of Vladivostok. North Korea began testing atomic weapons there in 2006, with further detonations in 2009 and almost three years ago on February 12, 2013. These tests have gotten progressively bigger. This can be inferred from the equivalent earthquake magnitudes computed from the strength of the explosions' seismic waves. These values increased from 4.3 in 2006, to 4.7 in 2009 to 5.1 in 2013.

According the the calculations of the scientists at the USGS National Earthquake Information Center (NEIC) in Golden, Colo., Wednesday's event also had a magnitude of 5.1. Germany's Geoforschungszentrum in Potsdam estimated a slightly higher magnitude of 5.2. Based on more than 2100 nuclear weapons test conducted by the five official nuclear powers (US, USSR, Britain, France and China) during the Cold War, these magnitude values can be converted into the strength of the explosion, the so called "detonation yield". Usually, an underground nuclear explosion which generates seismic waves with a magnitude of 5.1 has roughly the same yield as the detonation of about 7000 tons of the conventional chemical explosive TNT. As a comparison: the atomic bomb which destroyed Hiroshima close to the end of World War was about twice as strong as this explosion.

While seismological research has made it possible to determine the yield of an underground weapons test with reasonable accuracy, we seismologists can't tell which type of weapon was detonated. Therefore it remains to be seen, if North Korea's claim of having successfully tested a hydrogen bomb is true. However, even if Wednesday's test was used to perfect a "regular" atomic bomb, it is scary enough. (hra113)