Seismic Sensors by the Million

Do you know that you have a treasure trove in your pocket? Well, most of you at least, except for the very few who do not carry a smartphone. The blogger is not talking about some treasure for questionable marketing purposes, where unknown cyberforces use your smartphone to secretly spy on your whereabouts or shopping habits. No, we are talking about a treasure trove for science. Remember the old days of desktop computers, when you were asked to participate in citizen science projects? You left the desktop connected to the web overnight and scientist used its meager computing power to calculate the number "pi" to 34 billion decimals or to help sift through signals from outer space looking for alien civilizations.

Today's smartphones not only have orders of magnitude more computing prowess than the desktops of yesteryear, they also have built-in sensors. These little devices can measure temperature, minute changes in magnetic fields, detect the tilt angle of a phone or the level of light reaching its screen. All phones are also equipped with accelerometers, which are tiny devices which can sense the movement of the phone in three dimensions. Pedometers for instance, apps which measure every step of yours, make use of them. 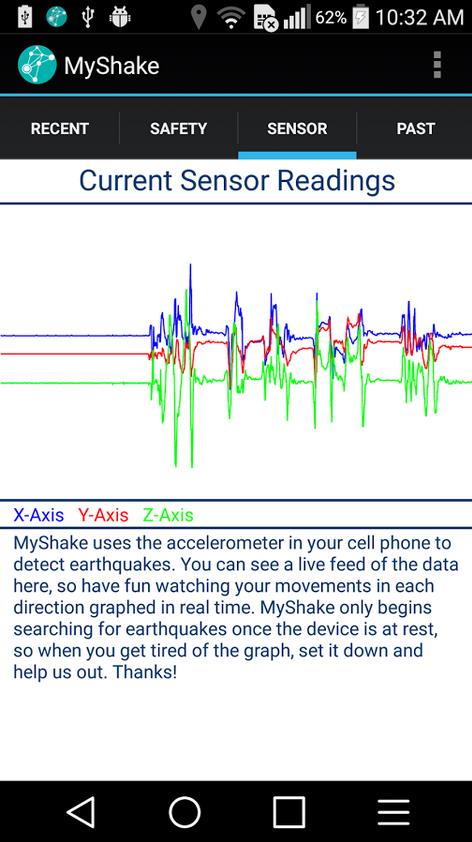 A screen shot from Berkeley's My Shake App shows the readings from the accelerometer built into a smartphone.

Now switch to earthquake science: You will be hard pressed to find any seismologist who does not want to install more instruments to monitor earthquakes. Today we have almost 500 such devices installed all over Northern California. But more would be better to improve the precision of earthquake locations, the imaging of faults, the understanding of the rhythm of plate movement and - most importantly - to get reliable early warning for earthquakes.

And what does all this have to do with the treasure trove? There are currently about 25 million smartphones registered in California, that means there are 25 million accelerometers available to measure ground shaking all over the State. No seismologist would even consider building a standard seismic network of that size. But if you could somehow tap into only a fraction of those smartphone accelerometers, you could create a seismic network larger than you might imagine in your wildest dreams.

Scientists at our Berkeley Seismological Lab and engineers at the Silicon Valley Innovation Labs of Deutsche Telekom have done exactly that: They have developed an app called "My Shake". It uses the measurements of the accelerometer in your Android smartphone to detect earthquakes. The big problem, of course, is to distinguish between the shaking due to the relatively rare earthquakes and all the other movement your smartphone is exposed to: You walk around or go jogging, you drive on BART, you go dancing at night. All of these activities excite the accelerometer more than any earthquake would do. However, through clever and complex programming the BSL researchers were able to discriminate between the various signals and concentrate on seismic ground shaking.

When running the app, the phones are connected to a central server computer which is programmed to compare the recordings of the various accelerometers. Once enough of them show ground shaking signals, an earthquake is detected. In the future scientists hope to feed this information into the Earthquake Early Warning System (EEW) currently under development along the US West Coast. Also, such smartphone networks may even be programmed to be stand-alone EEW systems in areas with too few seismometers, like in Africa.

And what do you as the smart phone owner get, when you run My Shake? You will get live information about current earthquakes, live readings from the accelerometer in your phone (see picture), safety tips on how to act during an earthquake - and of course you get the satisfaction of being part of a citizen science project helping us to improve earthquake monitoring and early warning.

You can download the My Shake app in Google's Play Store by clicking here.

More general information about My Shake can be found at:
http://www.eurekalert.org/emb_releases/2016-02/uoc--nat020316.php