Rumbling Under the Volcanoes

First it was Mount St. Helens in Washington, now it is Mount Hood in Oregon. Recently, hundreds of small earthquakes have been detected under these two slumbering volcanoes. Is something ominous brewing in the Cascade Range this spring? Are we in for another catastrophic eruption similar to the one which obliterated a large part of Mount St. Helens exactly 36 years ago tomorrow? While no serious Earth scientist will ever rule out a surprise eruption completely, all experts dealing with volcanism in the Cascade Range do not see the recent earthquake swarms as a sign of imminent danger on either of the two fire mountains. In fact, monitoring seismicity is currently the most powerful tool in understanding the behavior of magma inside a volcanic edifice. 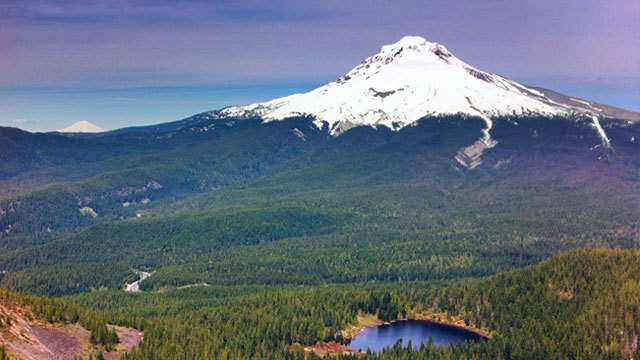 With a height of 11,240 feet, heavily glaciated Mount Hood is the tallest peak in Oregon. It last erupted in 1865.
Picture: Stovall/USGS

Here is what's happening: Starting on March 14 the first small earthquakes occurred beneath Mount St. Helens. Over the last 8 weeks researchers at the Pacific Northwest Seismic Network (PNSN) located more than 130 of these earthquakes with magnitudes between 0.5 and 1.3. There are many more quakes, but they are too small to be located. Scientists at the Cascades Volcano Observatory in Vancouver, WA, which is operated by the United States Geological Survey (USGS), noticed that the earthquake rates have been steadily increasing, reaching nearly 40 located earthquakes a week in early May. In the last few days however, the earthquake swarm seems to have faded somewhat.

However late last Sunday, the Earth under Mount Hood began to rumble in another earthquake swarm. By Monday morning, the temblor rate had reached up to 20 quakes an hour. The largest event had a magnitude of 1.8 and was located at a depth of approximately two miles. The 11,000 foot high mountain is located about 62 miles south of Mount St. Helens across the Columbia River. In contrast to its neighbor to the north, the glaciated Mount Hood (see figure 1) is considered dormant, having had its last small eruption in September 1865.

Thousands of earthquakes have occurred under Mount St. Helens since its eruption in 1980. This graph shows the number of quakes per day (left scale) between 2010 and Sunday night. The red line shows the cumulative number of quakes recorded in the same time frame (right scale)
Image: PNSN

The nature of the earthquake swarms under the two mountains seems to be completely different. What is rumbling under Mount Hood are tectonic events which are similar to the earthquakes here in the Bay Area. They occur on a bundle of earthquake faults just south of the mountain.

In contrast, the quakes under Mount St. Helens are all volcanically driven. Since its eruption in 1980, in which 57 people died, literally thousands of earthquakes have occurred under Mount St. Helens (see figure 2). One reason is the enormous amount of stress in the rocks which built up during the eruption. Even almost four decades after the explosion, these rocks are still relaxing. More importantly, however, is the movement of magma inside the volcano's plumbing system. As soon as the mass of molten rock moves, new regions of the volcanic edifice heat up, which leads to small cracks forming within the rocks. The cracks are in fact little earthquakes and can be recorded.

Over the years, seismologists have detected many kinds of such magmatically driven earthquakes, the most common being the so-called "volcano tectonic" or VT-events. A detailed observation of such quakes can even be used to predict imminent eruptions in a reliable fashion. This was recently explained by Randy White from the USGS office in Menlo Park at the annual meeting of the Seismological Society of America in Reno. His team had investigated the seismicity associated with 111 eruptions of 83 different volcanoes worldwide. White showed that VT seismicity is generally the earliest recognized seismic precursor to eruptions at volcanoes, which have been dormant for at least 25 years. This type of seismicity precedes eruptions of all magma types from basaltic to rhyolitic and of all level of explosivities. Luckily, none of the quakes in the current earthquakes swarms under the two Cascadian volcanoes were of that critical type. (hra121)