We have often said in this blog that California's most seismically active region lies around Cape Mendocino, halfway between San Francisco and the Oregon border. Thursday morning's off-shore temblor with a magnitude of 6.5 was a reminder of the seismic hazard in this region. People in all of Humboldt County and some places beyond were rudely awakened around 7 am by the swaying motion of the ground. Fortunately no serious damage or injuries were reported. 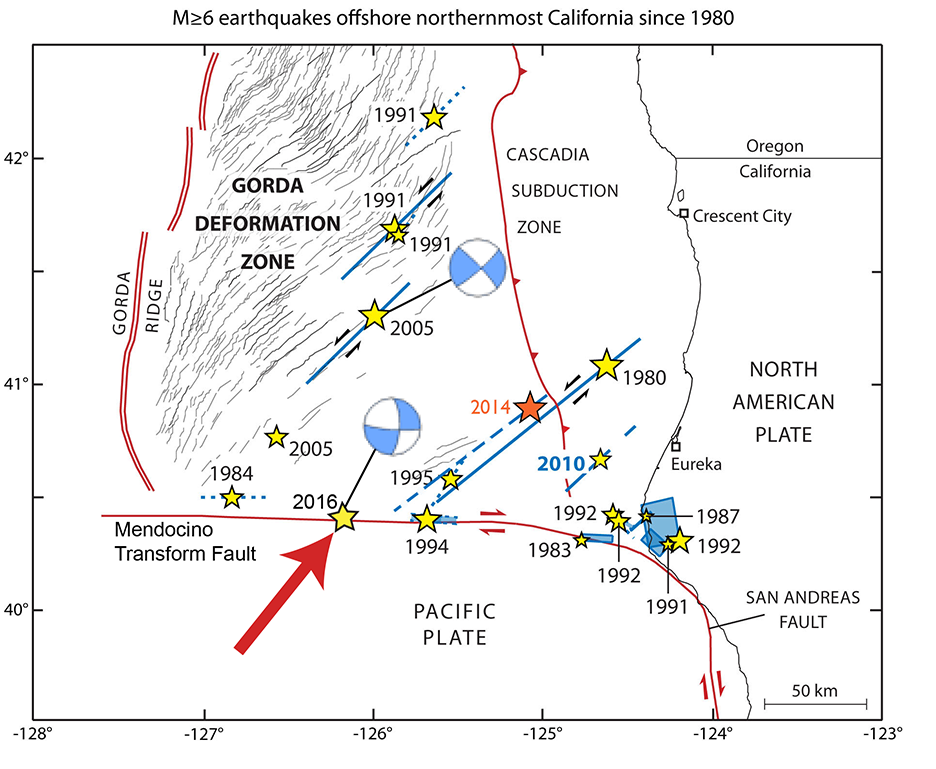 This map shows the epicenters of some of the major earthquakes in the vicinity of the Mendocino Triple Junction during the last four decades. The large red arrow points to the location of Thursday's quake. The circles with blue and white quadrants depict the differences in orientation of the earthquakes on the Mendocino Transform Fault and those inside the Gorda Plate. (Modified after Rollins and Stein, Journal of Geophysical Research, 2010)

The reason for the strong seismic activity in the larger vicinity of California's westernmost point is a rather unusual constellation of plates: The Mendocino Triple Junction is the meeting point for three of the lithospheric plates, which make up the Earth's surface. Tectonically the area south of Cape Mendocino is dominated by the San Andreas Fault, the boundary line between the Pacific and the North American Plate. North of the cape, the Gorda Plate, a small cousin of the Pacific Plate, glides under North America in the Cascadia subduction zone. This zone extends from Northern California all the way into British Columbia.

The boundary line between the Pacific Plate and the Gorda Plate west of the cape is a fault very similar to the San Andreas. It is called the Mendocino Transform Fault. It points from Cape Mendocino for several hundred miles straight west into the Pacific Ocean. Along this fault, the Gorda Plate slides horizontally to the east with respect to the Pacific Plate with a speed of about 2 inches per year. This continuous motion is the cause for earthquakes along the fault line. The last significant quake there had a magnitude of 7.0. It happened in September 1994, about 60 miles west of Cape Medocino. The focus of Thursday's quake was almost 40 miles further west.

However, the Mendocino Transform Fault is not the only place in this region where strong earthquakes occur. While it is seismically quiet south of the line, there are many strong temblors within the Gorda Plate itself, north of the transform. On its way east, the relatively small Gorda Plate is battered by its collision with the giant North American Plate. At the same time, the Pacific Plate is pushing northwards from the south, adding further strain to the young oceanic crust of the Gorda Plate. The consequence of this double whammy by its big brothers is that the Gorda Plate gets squeezed. It has developed a system of cracks and faults. Over the decades, many strong quakes have occurred along these faults, like the one in 1994 and the one on Thursday.

Seismologists can distinguish between the quakes along the transform fault and those further north. One method is to compute their locations. While the quakes along the Mendocino Transform Fault are arrayed in a straight line like a string of pearls, the hypocenters inside the Gorda Plate appear to be more randomly distributed. Another way to distinguish between the two kinds of seismic events is to look at their focal mechanisms. Along the east-west trending transform, the movement is right-lateral. In contrast, the quakes within the Gorda Plate have a left-lateral motion along fault lines which trend southwest-northeast. Fortunately, both kinds of movement are mostly horizontal - hence these earthquakes do not pose a tsunami risk. (hra133)