Oroville Dam Makes its own Earthquakes

The immediate danger to the highest dam in the United States, the Oroville Dam, is over - at least for now. While more than 180,000 people who had been evacuated along the Feather River downstream from the dam were able to return home earlier this week, the future of the 770 foot high earthen dam in California's Butte County is all but secure. The intense rainfall expected with the current storm, the heavy snowmelt in the spring and even earthquakes are a threat to the dam. In the previous blog, we described the kind of severe damage earthquakes can cause to earthen dams using the Van Norman Dam north of Los Angeles as an example. Although its construction is different than that of the Oroville Dam, it barely survived severe seismic shaking from the San Fernando earthquake of 1971. That quake occurred on an unknown fault, while the Oroville Dam is no stranger to earthquakes - in fact, it has caused its own quakes. But let's start at the beginning. 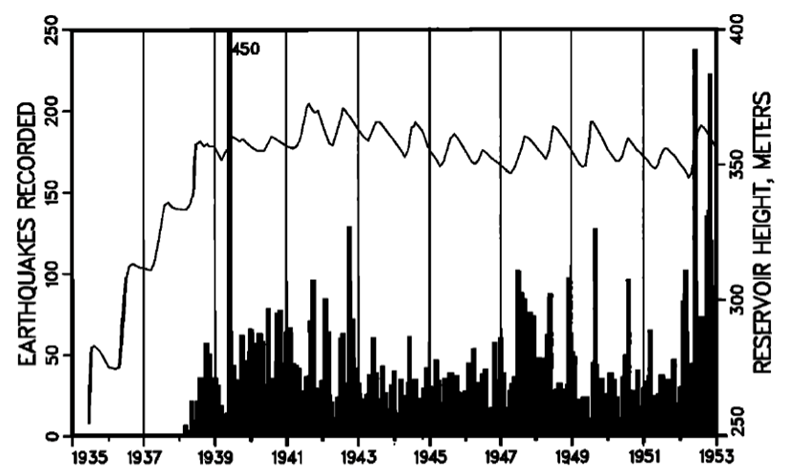 Figure 1: This 60 year old historic document shows the induced seismicity created by the filling of Lake Mead behind Hoover Dam. The black bars depict the number of earthquakes per year (left scale). The wiggly line shows the water level in the lake (right scale). Earthquakes started abruptly in 1938 when the lake was almost full.

Construction of the dam began in 1961 and the dam, with a crown almost 7000 feet long, was completed six years later. On November 14, 1967, the final diversion tunnel was closed and water storage began. In 1963, during construction of the dam, seismologists from the U.S. Coast and Geodetic Survey installed a seismic station about 0.4 miles north of the dam. They used what was then top of the line seismic monitoring equipment. Experts at UC Berkeley's Seismographic Stations - the predecessor to our own Berkeley Seismology Laboratory (BSL) - were tasked with analyzing the recordings.

The observant reader of the Seismo Blog may ask why a seismic station was built in an area of California with among the lowest known seismic hazard in the entire state. Historically only two significant quakes with estimated magnitudes between 5 and 6 are known to have occurred in the area, one in January 1857 near the city of Oroville and the other one in February 1940 about 40 miles to the north. The reason to build the seismic station labeled ORV near the dam dates back almost 90 years. Between 1926 and 1932 the concrete Qued Fodda Dam was built in Algeria. While the reservoir gradually filled with water, many small earthquakes happened in the area around the dam. These small temblors were a mystery, because like the area around Oroville, this region of Algeria was not seismically active.

Nevertheless, dam engineers took note and when the Hoover Dam was built between 1931 and 1936 as a flagship project in the US, seismic sensors were placed in the vicinity of the dam. And indeed, two years after the impounding of the Colorado River behind Hoover Dam began, large numbers of small earthquakes started to occur around Lake Mead. The number reached more than 400 in the first year alone (see Figure 1). By now, this phenomenon, which correlates water levels in reservoirs with the number of local earthquakes, is well studied and understood. It is called induced seismicity. 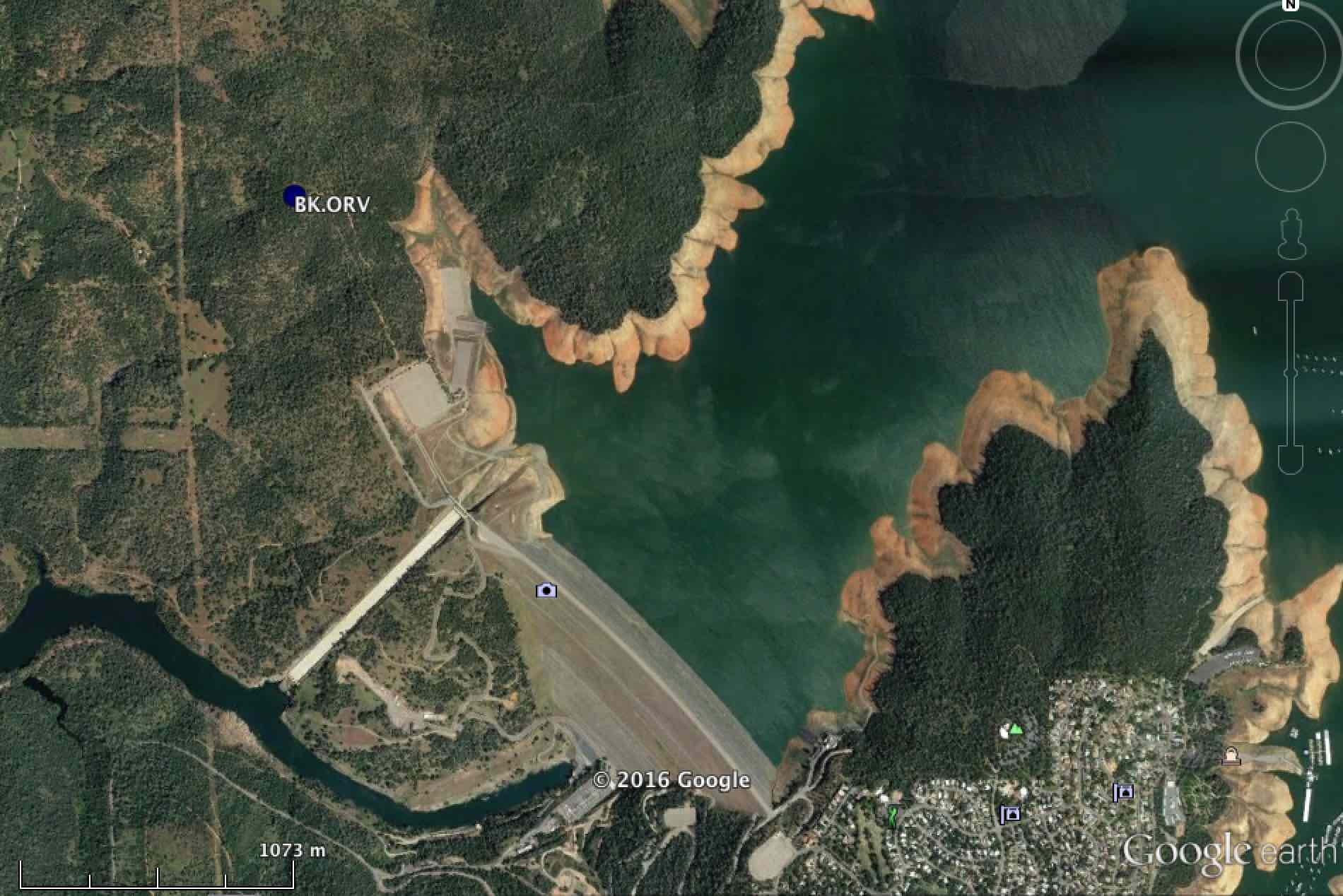 Figure 2: This Google Earth image from last year shows the Oroville Dam and the location of Berkeley's seismic station ORV, less than a mile north of the dam. The dam's concrete spillway is still intact. Note the low water level in the lake as indicated by the brown bathtub ring immediately above the water line. Today, Lake Oroville is at capacity.

Every piece of rock underneath our feet contains some water in its pores, the little, sometime microscopically small voids between its mineral components. When extra water gets into these rocks, the pore pressure inside rises, ever so slightly increasing the distances between the mineral components. However, if the rocks are crossed by a dormant fault, the increase in pore pressure decreases the friction along the fault and may allow an earthquake to happen. That's what happened in Algeria and behind Hoover Dam. The extra pressure exerted by the impounded water changed the pore pressure in the rocks and dormant faults were activated.

Engineers building the Oroville dam wanted to know if such induced seismicity would occur behind their dam as well, and thus they built seismic station ORV. The reservoir was first filled to capacity in July 1969 - and nothing happened for almost six years. The seismic sensors did not record any uptick in seismic activity around Lake Oroville. That changed suddenly on June 28, 1975, when a magnitude 3.5 quake occurred south of the lake. During the month of July, it was followed by almost 20 minor shocks in the same region, until a magnitude 4.7 quake hit on August 1. It was followed in turn by a magnitude 5.7 quake, which was felt in large parts of northern California and even in Carson City, Nevada. The quake caused light damage to buildings in the city of Oroville, but left the dam untouched. After another month or so the earthquake swarm subsided.

Why did it take so long for Lake Oroville to show any signs of induced seismicity? This question has never been fully answered, but the current hypothesis goes as follows: During the winter of 1974/75, large amounts of water were released from the lake to make room for the snow melt in the spring of 1975. During the spring, the lake refilled very quickly. The theory is that the rapid change in hydrostatic pressure somehow affected a dormant fault south of the lake. A similar rapid change in the lake level has occurred in the past few weeks. After six years of drought, the lake level had fallen dramatically, only to rapidly increase due to the rainfall and runoffs in the last few weeks.

So the question is: Are we in for a new bout of induced seismicity like that seen 41 years ago? Nobody knows, but if it happens, the modernized seismic station ORV will take notice. After 53 years it is still working and transmitting its data to the BSL (see Figure 2). In fact, during the current crisis, its sensitive seismic sensors have been recording ground vibrations caused by the torrent of of water roaring down the two spillways. These vibrations were so strong that they mask any weak signals of ground shaking that might be caused by tiny earthquakes. (hra136)