Earthquakes and scuba diving don't seem to have anything in common. If you happen to be on land when a temblor strikes, you will notice the shaking of the ground. Your legs may feel unsteady, you may even be thrown off balance and fall, if the ground motion is strong enough. The experience is certainly unnerving and it may even cause you to panic. Scuba diving, in contrast, is as close to weightlessness as it can get within the gravitational pull of the Earth. A properly balanced diver can float effortlessly in the water deep below the surface. This is a truly relaxing and enchanting sensation, particularly when one floats above a coral reef with hundreds of colorful tropical fish swimming around.

Probably Jan Paul Rodriguez had such an experience in mind, last Saturday afternoon (local time), when he took a few friends on a scuba dive into Batangas Bay off the Mabini peninsula on the Philippine Island of Luzon south of Manila. Once the group had reached a depth of approximately 60 feet, the divers suddenly felt abrupt changes in water pressure. At the same time they saw the seabed heave up and down and small rocks tumbling. Within seconds, the clear water became murky and they aborted their dive without anybody being hurt. Rodriguez caught the unusual action on video. 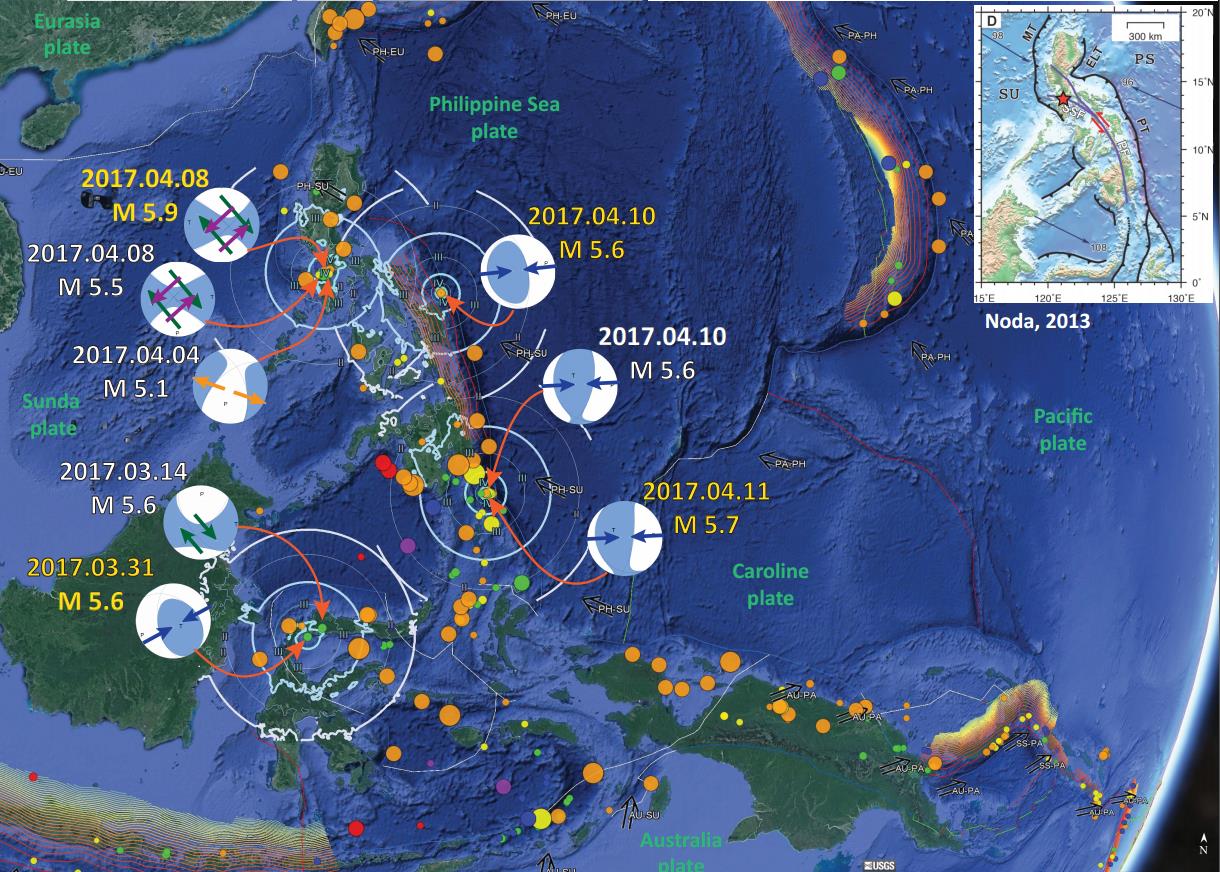 Figure: An unusual concentration of earthquakes with magnitudes between 5 and 6 struck the Philippines during the past two weeks. The strongest one with a magnitude of 5.9 surprised Scuba divers in the waters off southern of Luzon. This quake is depicted in the upper left corner on this map, marked by yellow comments. Illustration by Jason Patton, Humboldt State University

What had happened? While on their dive, the team experienced a magnitude 5.9 earthquake. They were diving in waters directly at the epicenter. The USGS located the quake at a depth of 26 miles exactly below the dive spot on the Mabini peninsula. This may have been the first time ever, that divers in the water experienced a significant earthquake that close. The heaving of the seabed was caused by the ground shaking induced by seismic waves emanating from the quake's hypocenter. And the sudden change in water pressure, which the divers felt, was caused by the same process, which generates tsunamis in much stronger quakes. The up and down movement of the seabed displaces the water immediately above, which in turn causes a pressure wave to propagate through the sea. In this case however, the amount of displaced water was too small to generate a tsunami.

As of now, Saturday's quake was the strongest in a series of 16 temblors with magnitudes between 5 and 6 which have shaken various parts of the Philippines in the past two weeks (see map). Although this archipelago is one of the more seismically active regions of the world, such a concentration of intermediate size earthquakes is unusual. Essentially all of the Philippines is earthquake prone, because these islands are being squeezed between several tectonic plates that are drifting in opposite directions. From the east the Philippines Sea Plate is pushing westward against the islands with a speed of about 3 inches per year. It subducts under a assemblage of fragments of the Eurasian plate, among them the Sunda plate. The Philippine trench along the eastern coast of the archipelago is the consequence of this subduction. In turn, the Sunda plate adds to the squeeze by moving westward at about half an inch per year. The situation in the southern part of the Philippines, specifically around the island of Mindanao is even more complex. There fragments of the Pacific Plate, like the Caroline plate, collide with the Australian Plate. This area was also the location of the strongest quake to hit this island nation since observation began. Shortly after midnight (local time) on August 17, 1976 a magnitude 8.0 earthquake shook the southern Philippines. It generated a strong tsunami with 4 to 5 meter high waves, which inundated more then 400 miles of coastline, leaving 8,000 people dead. (hra138)