A Rare Quake Made Even Rarer

The big earthquake that struck the Pacific coast of southern Mexico and northern Guatemala on Thursday night was the strongest temblor on our planet in two years. Its magnitude of 8.1 made it one of the rare, extremely powerful quakes which happen on average not more than once a year. The last quake of such strength struck the coast of central Chile almost two years ago on September 16th 2015. It had a magnitude of 8.3. But aside from their similar magnitudes and rarity these two strong earthquakes have very little in common. 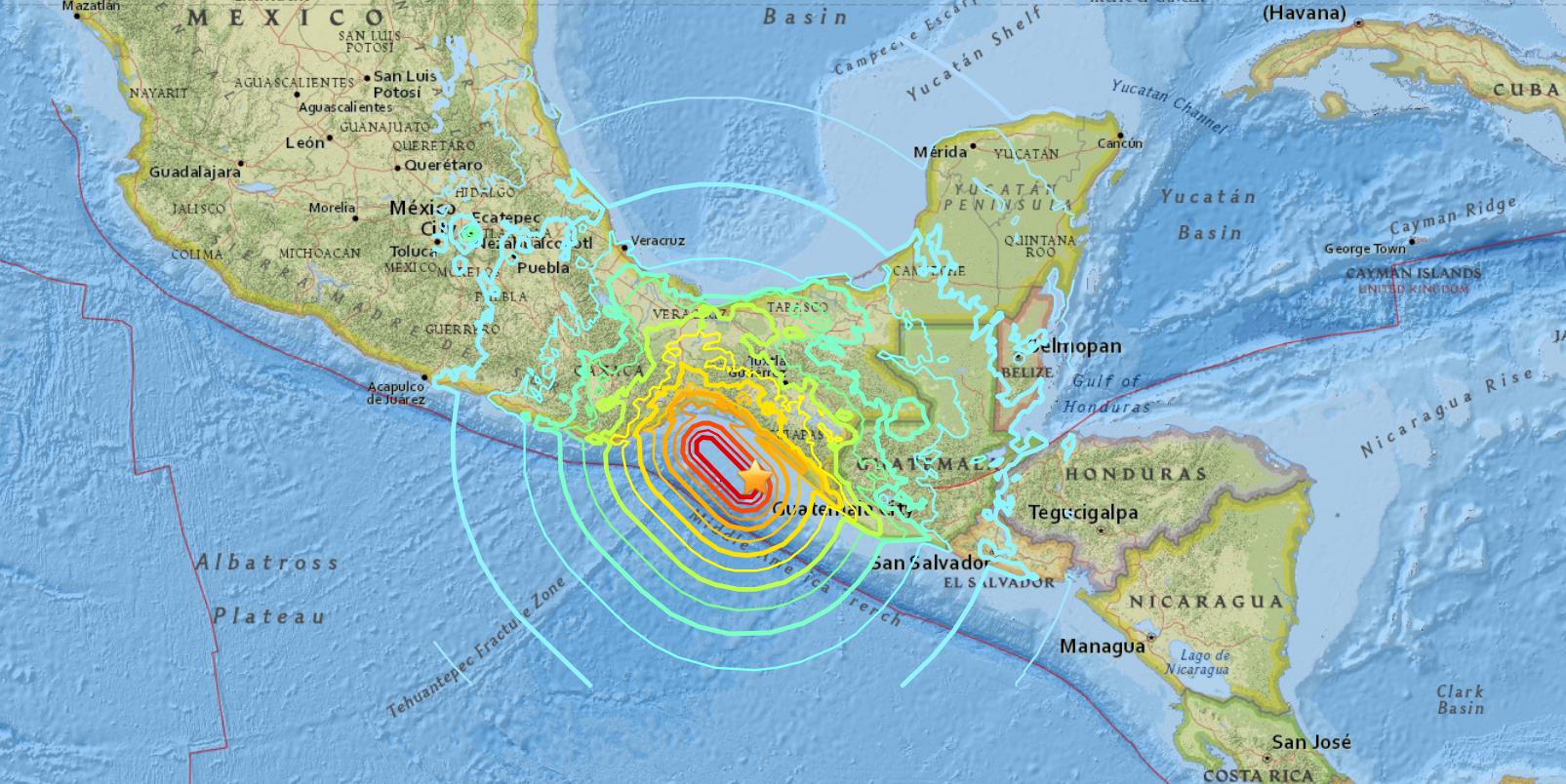 Last night’s quake was located at a depth of about 45 miles under the Gulf of Tehuantepec.
Source: USGS

At first glance, however, they seem strikingly similar. Both occurred in subduction zones, where an oceanic plate dives beneath a continental plate. Two years ago the earthquake near the town of Illapel in Chile took place in an area where the Nazca Plate subducts under South America. The quake in the Gulf of Tehuantepec last night happened where the Cocos Plate dives under the Caribbean Plate. Both the Nazca and Cocos Plates are born on the east flank of the East Pacific Rise. This giant, more than 6000 mile long submarine mountain ridge cuts through the Pacific Ocean from far south of Easter Island all the way to the Gulf of California in Northern Mexico. Both plates even move with a similar velocity of about three inches per year on their eastward tectonic journeys. Where these plates make contact with other plates, deep trenches develop in the ocean several dozen miles offshore, the Chile trench off of South America and the Middle American trench off of Mexico and Guatemala.

Such subduction zones are the homes of the most powerful earthquakes on Earth. To describe the workings of these huge temblors seismologists have coined the phrase "megathrust earthquake." They work like this: While the oceanic plate - in our two cases the Nazca and the Cocos plates - dives into the Earth's mantle, the friction of the downwards movement deforms the leading edge of the opposing plate severely. The diving plate even tries to drag the upper plate along for the ride, into the depths of the mantle. But instead of following the downward movement, the plate on the continental side resists this move. As a consequence it accumulates an enormous amount of mechanical stress. At one point - and nobody can say exactly when - this stress overcomes the friction between the two plates and the deformed leading edge of the plate thrusts upward in a giant earthquake. This sudden thrust movement is very big, hence the name megathrust quake.

Two years ago the quake off Illapel in Chile followed exactly this pattern. Yesterday's quake off Central America however, danced to a very different beat. There, the leading edge of the plate on the continental side of the subduction zone is not the only place where deformation and stress accumulate. The diving plate itself is bent severely on its way down. This bending also causes a large amount of internal stress. At one point the internal forces which hold the subducting plate together are overcome by this stress and the plate breaks. The resulting movement is not a thrusting snap upward, but an internal slip downward in the direction of the earth's mantle. It is extremely rare that this kind of so called "normal faulting" within a downgoing plate gets so large that it generates a quake of a magnitude of more than 8, leading to the strongest earthquake which has struck Mexico in at least a century.

While the quake was strongly felt even in Mexico City almost 450 miles northwest of the epicenter, it did not cause any significant damage in the capital. The most severe damage was found in Juchitán, a city of about 100,000 people on the Pacific Coast of Oaxaca state. There the regional hospital, a large church and half of the city’s nineteenth-century city hall collapsed. By a count on Friday morning, at least 32 people were killed in this quake, most of them in Mexico and some along the Pacific coast of northern Guatemala. The quake also caused a tsunami with a maximum wave height of about six feet. (hra145)