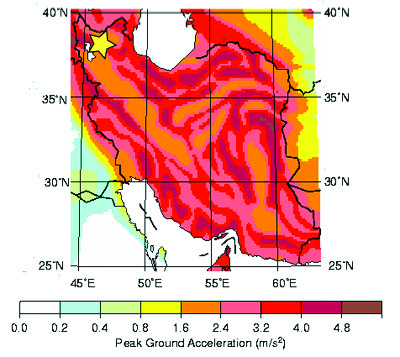 Map of Iran showing peak ground acceleration (m/s2) as a result of the August 11th earthquakes. The city of Tabriz is denoted by the star in the Northwest part of the country. (Click to view larger image.)

It was Saturday afternoon in Iran's historic city of Tabriz. Located in the Northwestern part of the country, many of the city's 1.4 million inhabitants are Azeris, closely related to the folks in neighboring Azerbaijan. Many people in Tabriz were watching the last events at the London Olympics when shortly before 5 PM local time, the first temblor stuck. Eleven minutes later, the earth violently shook again. The USGS office in Golden, CO, assigned these two quakes magnitudes of 6.4 and 6.3.

Although these two events were rather lightweight on the scale of strong earthquakes, they caused severe destruction mainly in the villages and hamlets around Tabriz and the smaller city of Ahar. At least 250 people were killed and several thousand were injured by the quakes.

Iran belongs to a huge earthquake zone which stretches from Portugal in the West to the Himalaya Mountains in the East. In this zone, three tectonic plates moving northward collide with the large, nearly stationary landmass of Eurasia. In the West, the African Plate pushes against Europe. The eastern section of the earthquake zone is dominated by the collision of the Indian subcontinent with Eurasia. In the central part of this earthquake belt, Eurasia is hit by the Arabian Plate.

The consequences of such a plate collision are similar to a car crash. Just as in a road accident where steel and plastic bend and split, so the Earth's crust deforms heavily where two plates crush into each other. This leads to continuously growing mountain ranges like the Alps in the western part of the belt and the Himalayas in the East. Similar mountains have formed in Iran, for instance the ranges of the Zagros and the Elbrus mountains.

The Arabian plate is drifting northwards with a speed of just over one inch per year. Although extremely slow by everyday standards, this movement is strong enough to cause mountain ranges to be folded and earthquakes to occur. The earthquakes in Turkey, like the one last year in East Anatolia are also a consequence of the tectonic collision between Arabia and Eurasia.

But in few other countries have so many people died in earthquakes as in Iran. According to the Encyclopedia Iranica more than 126,000 people died due to earthquakes in the last century alone. The largest catastrophe ever to strike this region of the world, hit the cities of Damghan and Ardabil in the ninth century, killing more than 350,000 people in two earthquakes. Before Saturday's quakes, the most recent devastating earthquake in Iran occurred in December 2003. The historic city of Bam was leveled then by a 6.6 magnitude quake. An estimated 25000 people were killed in the rubble. (hra079)