P-waves and S-waves - which are faster? 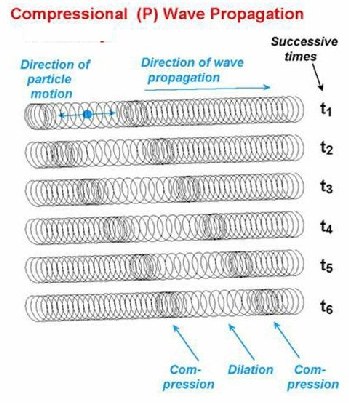 The magnitude 4.0 earthquake, which struck under Alamo last Friday night, was felt widely in the greater Bay Area, from Half Moon Bay in the west all the way to Stockton in the east. Many people noticed two distinct jolts, just a few seconds apart. In Orinda, where we were still sitting at the dinner table with family and guests, the two shocks were almost equally strong with about three seconds between them. 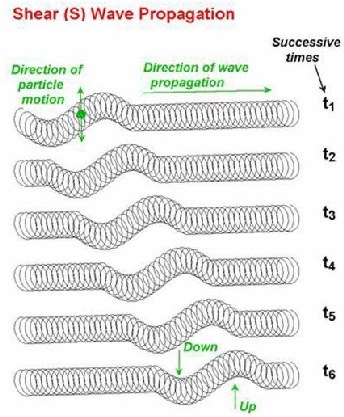 Such two separate rumbles are not a sign of two individual earthquakes. Instead they are a consequence of two kinds of seismic waves, which are radiated from every earthquake focus. One type is called a compressional wave, because the seismic energy compresses and releases the ground periodically as the wave passes through. During the shaking, the ground moves in the direction of the propagating wave. (see Fig. 1). The other type is called a shear wave, because it make the ground move perpendicular to the wave direction (see Fig. 2)

Compressional waves are also called P-Waves, (P stands for "primary") because they are always the first to arrive. They gave us the first jolt last Friday. Shear waves propagate more slowly through the Earth than compressional waves and arrive second, hence their name S- or secondary waves. They were responsible for the second rumble. The difference in arrival time between these two types of seismic waves can be used as a rough estimate of the distance to the earthquake focus. As a rule of thumb: Multiply the time between the two jolts by 5 and you get the distance to the focus in miles. 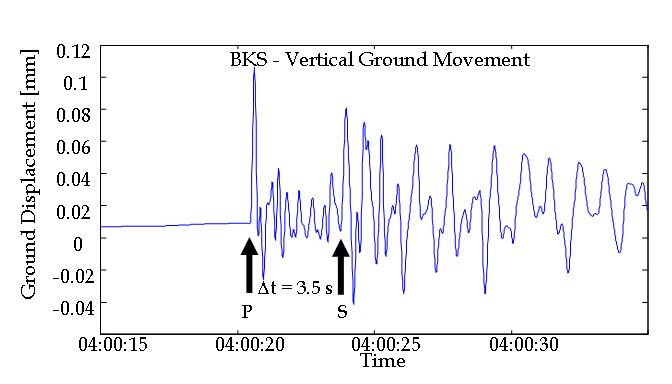 Looking at a seismogram of the Alamo earthquake (Fig. 3) the time difference between the arrivals of P- and S- waves is 3.5 seconds. This seismogram was recorded at our station BKS, which is located in Strawberry Canyon in the Berkeley Hills above campus. Applying the rule of thumb, we get a distance to the earthquake focus of approximately 17.5 miles. The result is pretty good, as the actual distance is exactly 16.5 miles. (hra002)