The Berkeley Seismological Laboratory and its predecessors at UC Berkeley have been operating seismic equipment and monitoring earthquakes in California and the Western US since 1887. Historical seismic records from the original era (1887 - 1910) exist in the form of "observation books" reporting the earthquakes recorded on the Ewing seismographs of the era. Records from the 1906 earthquake were copied from the recording plate and published in the Lawson Report.

In 1910, seismic activity was recorded on smoked paper on rotating drums on the Wiechert seismograph purchased with funding from W. R. Hearst. Several records still exist from this era.

The vast majority of the BSL's retains paper seismogram records span the years 1923 through 1992 and were recorded on Wiechert seismographs as well as Galiztins, Wood-Andersons, Bosch-Omoris, Sprengnethers, Benioffs, at a variety of stations throughout California and Nevada. In addition, we have the "reading books" that formed the basis for the determination of earthquake locations in the era before computer analysis as well as the Bulletins published annually by the Seismographic Stations. Beginning in the 1960s, there are also nearly continuous develocorder film records. Perry Byerly also collected records from stations throughout the world for a number of important earthquakes, which are still archived at the BSL.

Because of its excellent collection of historical seismograms, the BSL has been declared a "Reference Station of the World" (http://www.iris.edu/seismo/stations/).

All these historical seismological records are available to researchers. We are able to scan and send a limited number of seismograms by email, given a few weeks notice. Researchers with larger projects may arrange to visit the BSL to complete their scanning. For more information on using the paper seismogram collection, please email us at info@seismo.berkeley.edu. You can view and download previously requested and scanned records here. 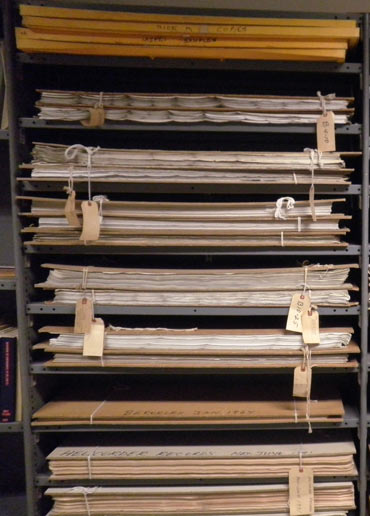