One of the worst natural disasters in the Americas occurred 23 years ago today, when at 7:19 am local time an earthquake of magnitude 8.1 struck in the subduction zone off the west coast of Mexico. The epicenter was located approximately six miles offshore near the town of Zihuatanejo in the state of Michoacan. Although there was severe damage in the coastal regions, the real disaster happened 220 miles away in Mexico City. Less than 15 minutes after the quake, thousands of people in the capital lay dead and the Mexican economy was shattered for years to come. Until today, nobody really knows how many people perished as a result of the earthquake. Official figures for the number of fatalities vary between 9,500 and 35,000. Most people died in Mexico City, where 412 multistory buildings collapsed completely and another 3,124 were seriously damaged, including 13 hospitals. Most of the destroyed structures were between 8 and 18 stories high. 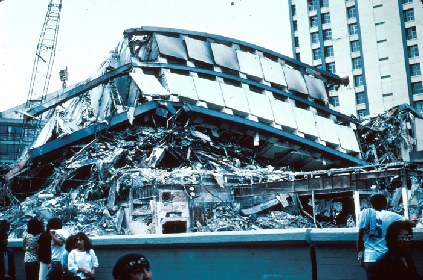 How can an earthquake cause so much damage over 200 miles from its focus? What happened 23 years ago in Mexico is comparable to a temblor occurring along the San Andreas Fault near San Francisco leaving Bakersfield in ruins. To answer this question, we have to go back in history almost 700 years. In 1325 the Aztecs, one of the high civilisations of Mesoamerica, founded their capital Tenochtitlan. They build it on an artificial island in a shallow lake in Mexico's central altiplano. Although the old capital was flooded again and again, the Spanish did not abandon the site in what they called Lago de Texcoco, but enlarged it instead. After Mexico's independence the settlement became the capital of the newly founded country. During the last century, the lake was completely drained, to make room for the housing needs of the ever-growing population of Mexico City. 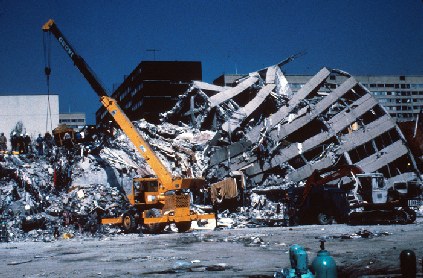 Figure 2: Fifteen-story reinforced concrete structure. Part of the building was only slightly damaged, while another part of it collapsed. Photo Mehmet Celebi, USGS

A lake bed in a basin, however, is one of the worst grounds for constructing a building. While hard rock simply shakes with the same frequency and amplitude as seismic waves, the unconsolidated sediments of an ancient lake bed react differently: They can amplify the shaking and even worse, they can lose their consistency and become a liquid. Such site amplification and liquefaction occurred, when the waves of the distant earthquake shook the bed of former Lake Texcoco under Mexico City. Poorly founded multistory buildings lost their footing and collapsed. Read more about the dangers of liquefaction in the next blog entry. (hra004)