Earthquake Probabilities in the Bay Area

Do you know why seismologists dread going to cocktail parties? They hate to say "I don't know!" That, of course, is the only correct answer to the question that inevitably pops up at such parties, when one admits to studying earthquakes: "When is the next big one going to happen?" Well, seismologists really don't know, because earthquake prediction is beyond the reach of any serious scientist. A meaningful prediction has to fulfill three criteria: One has to forecast exactly where, when and with what magnitude an earthquake will strike. Despite considerable research efforts in many countries, nobody anywhere has succeeded in getting all three of those criteria consistently right. 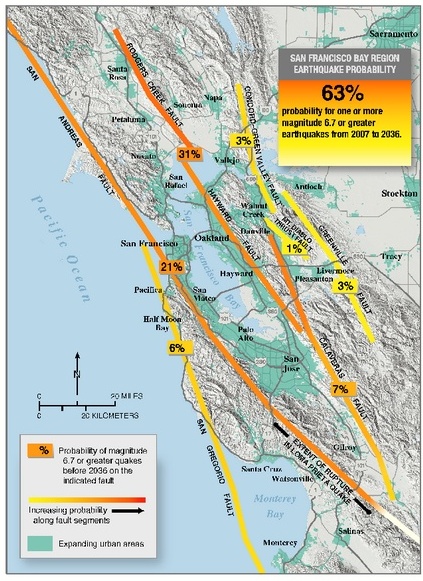 That, however, does not mean that Earth scientists are oblivious to the risks and dangers earthquakes pose. Among other things, they have developed a method called "probabilistic risk analysis". Although not nearly as precise as a prediction ought to be, it enables seismologists to calculate the chances that an earthquake of a certain size would strike a certain segment of a fault during a specified time window.

Northern California seismologists have repeatedly analyzed the seismic risk for the Bay Area (see map). They currently predict, that there is almost a "two out of three chance, that one or more earthquakes of magnitude 6.7 or larger will strike in the Bay Area in the next 30 years". What does that mean in layman's terms? If you continue to live here for 30 years, you will almost certainly experience an earthquake as strong as the Loma Prieta quake, which struck the Bay Area in the fall of 1989, killing 63 people.

Seismologists have even calculated detailed probabilities for the various earthquake faults in the Bay Area
(October 7, 2008). These calculations take into account the current slip rates along these faults and how often earthquake occurred there in prehistoric times. It turns out, that the lowest chances (3-4 percent over the next 30 years) are in the region around Livermore, Mt. Diablo and Concord. There is a one in ten chance, that a strong earthquake will happen along the San Gregorio Fault between Monterey and Pacifica. The segment of the San Andreas Fault in our region which slipped during the 1906 San Francisco Earthquake has a one in five chance of going off again during the next three decades. The highest probability, however, is along the Hayward Fault in the East Bay and along its northern extension, the Rodgers Creek Fault. Read more about the riskiest fault in the Bay Area in our next blog. (hra009)