Of Satellites and Fingernails

The following statement sounds ridiculous, but bear with the blogger anyway: Assume you could stand on the observation platform on top of Mount Diablo for a few million years. If you looked westwards towards the City and the Pacific Ocean during that time you would see the whole landscape slide by slowly. San Francisco would move to the north, Oakland, the Berkeley Hills and even Walnut Creek, the city right at the foot of Mount Diablo, would move a considerable distance to your right. Now imagine you were to cross the Bay and climb to the top of Mount Tamalpais. Again you camp out there for a million years or so, but during the whole time you look eastwards across the Bay. A similar picture would emerge: Mount Diablo would slide towards the south, the East Bay Hills and all the cities at their foot would also move towards your right. 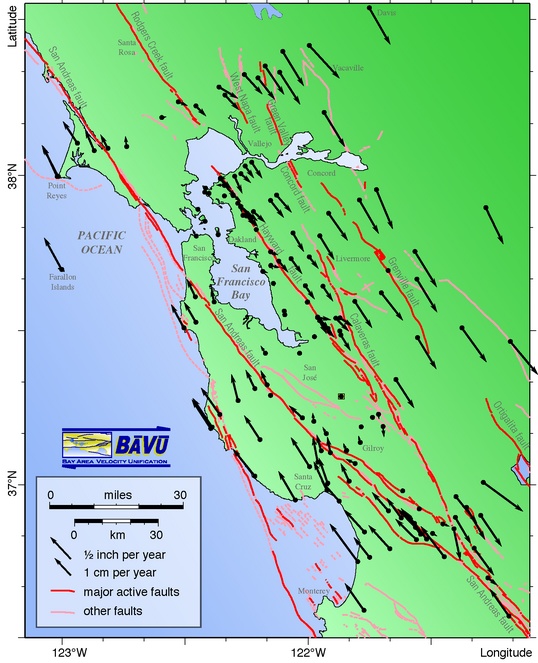 We scientists, of course, are way too impatient to wait for a million years to see the effects of the plates' endless drift. However the same satellite based GPS-System, which helps you navigate around town, enables us to measure the plate motion directly and with high precision. Our GPS instruments are considerably more expensive than the navigation system in your car, but they allow us to pinpoint a location with a precision of less than an inch. In contrast, a typical car nav-system knows its location with a much cruder accuracy of several yards.

By visiting several dozen fixed spots in the Bay Area a few times per year with these precision GPS-tools, or measuring continuously, we can determine the relative positions of these points. The map shows the summary of several years of such measurements. And indeed it turns out, that the various points in the Bay Area move with respect to each another. Look at a black arrows in Livermore or Vacaville and compare them to the arrows at the Farallons or Point Reyes. Each point moves about one inch per year, the East Bay cities to the southwest, while the points in the Pacific move in the opposite direction. How slow is an inch per year? The plate movement in our region has about the same speed which with a healthy fingernail grows. (hra011)