It took a disaster of almost biblical proportions, but finally the Indian Ocean got its own tsunami warning system. Earlier this week, when Indonesia's President Yudhoyono pressed a button in the offices of the Meteorological and Geophysical Survey in Jakarta, he inaugurated a system which will be used to warn people in the coastal communities of Indonesia about the menacing monster waves. While for decades several such systems have existed in the Pacific (i.e in Hawaii, Alaska and Japan), there was no way to warn the people along the coast of the Indian Ocean when the biggest earthquake in forty years struck the area in December 2004. A magnitude 9.2 quake off the coast of the Indonesian island of Sumatra created the largest tsunami the world has seen in historical times. Even thousands of miles away from the epicenter, entire coastal communities were swept away by the killer wave. In the end, the death toll reached more than 230,000 and the physical damage to buildings and infrastructure could hardly be measured. 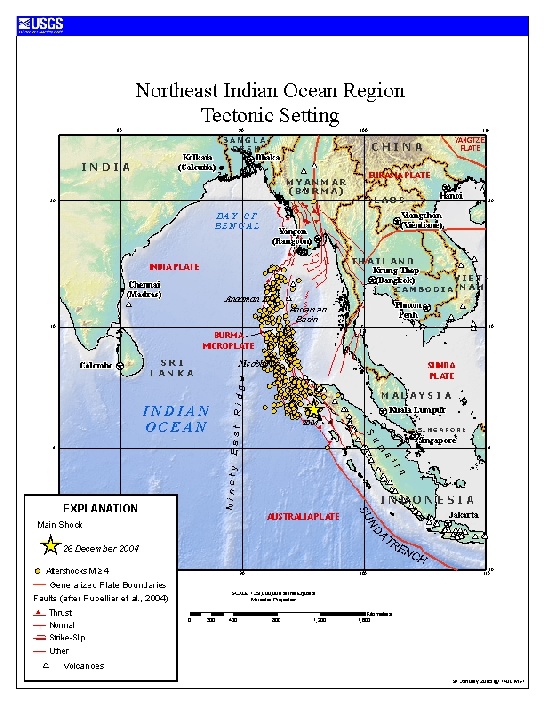 Tectonic setting of the earthquake that generated the devastating December 2004 tsunami. Click to view larger image. (Image courtesey of the USGS)

In the aftermath of the disaster, many nations generously donated aid to cover the immediate needs of the people affected by the wave. The German government, however, took a different approach. Besides the first aid, it promised the Indonesian government a complete tsunami warning system. Many experts laughed at this proposal, as German science was not known for its expertise in studying these waves. But Berlin put its researchers and engineers to work anyway. At a cost of almost 60 million dollars, a total of 125 scientists put together a complete system in less than four years: they set-up earthquake and GPS stations remote parts of Indonesia. Together with local engineers, they installed tidal gauges and ocean bouys to measure wave heights. In addition, they linked all their sensors to the data center in Jakarta and wrote the programs which calculate the run time and amplitude of a potential tsunami. Finally, they trained local scientists to operate and maintain the system.

Germans and Indonesians tested the system together in many simulated sessions, and most international experts agree that its warnings will be valid. Once it's fully functional, the system will be upgraded to cover the whole Indian Ocean basin. See a detailed description of the system. (hra017)