Two events coincide, according to the Merriam-Webster's dictionary, when they happen at the same time. Nowhere does it say however, whether these two events need to be related or not, or if one can be the consequence of the other. That's why we speak of a "pure coincidence" when two completely unrelated events happen simultaneously. An example could be, when my car gets a flat tire in the Caldecott Tunnel at the same time my daughter in Boston wins the lottery. Some pure coincidences can be very unlikely, say that the A's win the World Series in the same year that the Raiders clinch the Superbowl.

Pure coincidence was at play on Saturday morning when two earthquakes occurred that had nothing to do with each other. Within 39 seconds, the earth was shaken by two earthquakes of the same magnitude, 6.4. The epicenters of these two quakes were both in the ocean. The first one occurred at 8:01 am PST in the Indian Ocean off the coast of the Indonesian island of Sumatra. The other one happened a little bit more than half a minute later in the South Pacific east of New Caledonia near the Loyalty Islands (see map). 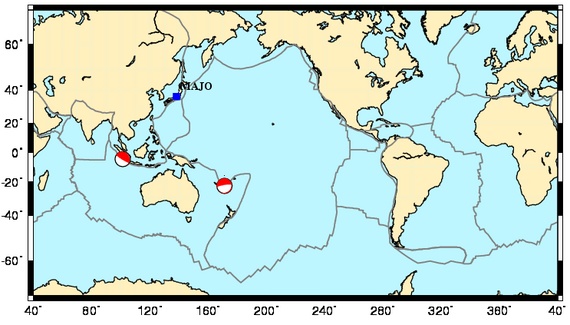 On average, about a hundred temblors with magnitudes between 6 and 6.5 occur worldwide every year (see blog September 14, 2008). If they occurred regularly, that means if there were some form of physical relationship between them, we would get about two of them per week. But earthquakes here in California are in no way connected to temblors in Japan or terremotos in Chile. In contrast to many a lore, there is no long-distance force associated with one quake that could trigger another equally strong earthquake on another continent.

Saturday's two epicenters were 4836 miles apart. If such a hypothetical trigger were to exist, it would have had to traverse this distance in 39 seconds, which corresponds to a speed of roughly 450,000 mph. No tectonic force acts with such a high velocity.

The two coincidental earthquakes made for interesting seismograms, because the seismic waves of the two earthquakes were intermingled, making it difficult for seismologists to identify which phases belong to which quake. An example of the recordings of the seismic station Matsushiro in Japan is shown in the figure, labeled with the correct phases. (hra019)